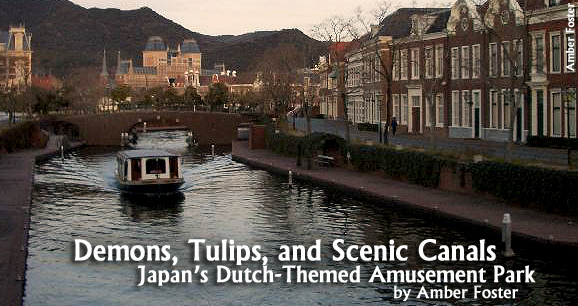 The little girl with blond braids loved her dog.  “I love you, Spot,” she cooed, petting his perfect, auburn fur.  Spot didn’t look too good.  He whimpered, a sad look in his round, little eyes.

“Oh, dear!” said the little girl.  “I know I can save you if I go to the magic place in the forest.”

Thus, the little girl went to the forest, and everything seemed fine and dandy until a big animated demon head came floating out of nowhere and started chasing her through the woods.  It flew out of the screen and over the heads of the audience, causing several small children to start waving their hands in front of their oversized 3-D glasses.

Of course, the girl managed to escape the demon in the end, at last finding the magical cure for Spot in a dream landscape evocative of a bad ’60s drug movie.  The film ended with her frolicking merrily in a field of tulips, a Dutch windmill turning lazily in the background.

As it turned out, this was only one of the many unusual attractions at Huis Ten Bosch.

Huis Ten Bosch, Dutch for “house in the forest,” is a Dutch-themed amusement park about an hour north of Nagasaki, Japan.  Most of the attractions are light shows or fountain shows reminiscent of Disneyland à la 1985.

The “Mysterious Escher” 3-D adventure my friend Trisha and I witnessed reminded me instantly of the old Captain EO show I saw at Disneyland when I was a kid, starring Michael Jackson.

Of all the attractions at Huis Ten Bosch, our favorite was a ride called the “Flight of Wonder,” although the real wonder being how it managed to stay in operation so long. It was clearly showing signs of age, as it emitted a variety of pained creaks, groans and squeaks as the cars traveled along the track.

Despite its flaws, Trisha and I loved it.  Much like Peter Pan’s Flight at Disneyland, this ride involved sitting in a car that hung from the ceiling, winding around a track through darkness as you followed a chronological story.  The journey was an anime-style adventure with antiquated claymation figures on screens acting out a story involving a wicked witch, a castle and a good little witch on a broom.

As we exited, we passed under a large black light, and Trisha and I got childlike glee in seeing our teeth and eyes glow green.  Glow-in-the-dark stamps were available for little kids before entering, but that didn’t stop either of us from stamping ourselves several times on our faces and hands.

Since they were invisible under normal light, the ride staff had no idea why we kept riding over and over, giggling hysterically. They simply thought there was something very, very wrong with us.  They may have been right.

Each of the park’s attractions is different. Located in the Grand Voyage Theater, the world’s largest simulation theater, is a sea adventure where the audience’s seats rock along with the ship on the screen. Another involves tons of water being dumped on a pristine Dutch town in a re-enactment of the great floods of Holland.

However, by late afternoon we began to notice some strange similarities in theme.  In each attraction, a blond-haired, blue-eyed, character suffers an extremely harsh fate, whether it is getting captured by an evil demon, getting destroyed in a vicious flood, or being sunk in a great storm.  The poor Dutch folks just couldn’t catch a break.

Despite reservations about the rides, I can’t deny that Huis Ten Bosch is a pretty place.  There are flowers, windmills and scenic canals. It had been built on a square mile of reclaimed land and made to look like an idyllic paradise, utopia, a far away and magical land that, to the Japanese, is Holland. Traditional-style Dutch houses line the canal.

The difference is that in this version of utopia, all the “old” buildings are really new, filled with shops and museums.

It is a great way for a family to spend a day, especially with the tandem and four-seater bikes available for leisurely tours around the park, but I missed the sheer volume of things to do that an American-style theme park has.   Here, there are few rides, and most attractions involve sitting and watching a presentation of some sort.  The rest are hotels, stores and restaurants.

The Dutch theme of the park wasn’t quite what I had expected.  Call me crazy, but I expected to buy food and beverages that were, well, Dutch.  When Trisha and I had a craving for beer we discovered, to our dismay, that only Japanese beer was available.

As for authenticity, as long as there are windmills, canals and some tulips, I suppose the average Japanese person wouldn’t know the difference.  I was disappointed in this, but I probably was a little bitter due to lack of roller coasters.

When we finally left, it was dark and the lights glimmered along the canals.  The buildings were lit up in brilliant displays of flashing color. I could not deny that the makers of Huis Ten Bosch had created a pleasant place.

To my admittedly Western-biased eyes, Huis Ten Bosch is a modern-day equivalent of an early 20th century carnival. The experience made me wonder if there is something deep in the human heart that, despite all our technological advances, still craves the bawdy delights of the snake man and the bearded woman.

After two years of teaching English in Japan, Amber Foster is now backpacking through Southeast Asia. She hopes to spend some time in Thailand getting her Master Diver scuba certification and eating lots of delicious Thai food. Other than that, the goal is to eat, sleep, drink, play, love and (of course!) write.

The USS Alabama: A Voyage into the Past
Next Post: Roads to Freedom: Solidarity in Gdansk