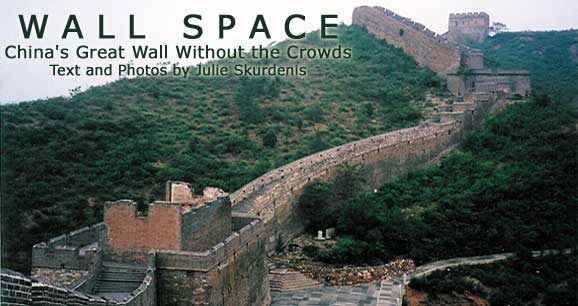 The Great Wall of China. There’s little doubt that it is China’s most famous sight. Stretching approximately 1,500 miles (2,400 km) across northern China, it meanders snakelike over mountains and valleys, and over vast steppes and arid deserts. In some sections, the wall is in ruins; in others it is barely visible, all but obliterated by time. In still other sections, it has been restored.

There is more than one Great Wall; in fact, the Great Wall is made up of numerous walls built at different times. The structure was erected over a period of almost 2,000 years, by different builders. The earliest parts were constructed between 453 and 221 B.C., when rival war lords built walls to keep each other at bay. In the 3rd century B.C. (221-206 B.C.), the first emperor to unify China, Qin Shi Huang Di, erected walls to protect China from northern invaders. His successors, the Han emperors, who ruled China for more than 400 years (206 B.C.-220 A.D.), extended the walls westward. However, much of what we now call the Great Wall was built in the 14th through 17th centuries, during the Ming dynasty.

The Great Wall conjures up dozens of adjectives, among them: majestic, immense, awe inspiring, beautiful … and crowded. “Crowded” is probably the first adjective that comes to mind if, like me, you are among the hordes of tourists who visit the two best-known sections of the Great Wall, Badaling and Mutianyu.

On our most recent trip to China, however, we “discovered” three sections of the Great Wall that are — for the moment at least — nearly devoid of tourists and locals. Two — Jinshanling and Simatai — are located about 75 miles (120 km) northeast of Beijing (China’s capital); the third, — Juyongguan — is only 36 miles (58 km) from the capital.

Jinshanling, built during the reign of the first Ming Dynasty emperor, Emperor Hung Wu (1368-1398), is approximately 12 miles (19 km) long, and is studded with watchtowers: there are about 100 of them, approximately eight per mile (1.6 km). The watchtowers typically stand about 30 feet (9 m) high, and consist of two levels; the lower one was used for weapons and provisions, and as a garrison for soldiers, the upper level was the lookout. The towers were not built in a cookie-cutter fashion. Some were circular, others oval or square. Their roofs varied as well; they could be flat, domed, or vaulted. One wonders what poetic souls named them long ago. Many bear names such as Peach Spring Tower or Fox Head Tower.

Jinshanling is very picturesque as it winds over mountains; however, there are few flat portions to walk along. Most of this section is steep, with stone staircases that climb up and down, up and down. Jinshanling is literally and figuratively breathtaking.

In contrast to the hordes of human ants who labor up and down the inclines of the Wall at Badaling and Mutianyu, we were theonly ones hiking Jinshanling. It was exhilarating to enjoy the sights — the ancient stones, and the nearby mountains now and then emerging from the mist — with no one else around.

There is a cable car to several of the towers, but it wasn’t operating when we visited. From the parking lot where our driver waited for us, it’s a walk of about 30 minutes to the wall. To save your energy for hiking the wall itself, you can have a van take you to the foot of the wall, where it will wait for you, then return you to the parking lot after your walk.

Here too, many of the watchtowers bear lovely names: White Cloud Tower, Fairy Maiden Beacon Tower, Eyes of the Cat Tower. Some of the portions between the towers also bear evocative names. One such section is called Ladder to Heaven. It is very steep, as is much of Simatai, making the going slow and, if it is raining, treacherous. However, there are other sections which, though steep, are not as dangerous.

We were not alone at Simatai, as we were at Jinshanling. There were others hiking the precipitous stairs and steep inclines, but it was only a fraction of the numbers we encountered at Badaling and Mutianyu. It was possible at Simatai, as at Jinshanling, to savor the wall and the views from it without feeling pushed along by the human tide.

It’s a 45-minute uphill walk from the car park to the first watchtower at Simatai. While there is a cable car to some of the watchtowers, it wasn’t working when we visited, and there was no van to take visitors to the wall. The hike, however, is worth the effort. There are views over a reservoir and, once you finally reach the nearest watchtower and begin the climb along the Great Wall itself, the scenery is magnificent even if you come on a misty day, as we did, with mountains peeking in and out of the clouds. “It’s like walking in a Chinese scroll painting,” commented my husband, Paul.

On the way back to the capital, we stopped at yet a third section, Juyongguan, which is set among lovely temples and courtyards. It’s much closer to Beijing, only 36 miles (58 km). The views here are spectacular, since you can see so much of the wall as it winds up and down nearby hills. Few people were here when we visited, which is surprising, considering its proximity to Beijing. We once again enjoyed the near-solitude.

If you want to savor one of this world’s greatest travel experiences at a leisurely pace and almost alone, go to Jinshanling, Simatai or Juyongguan; just don’t tell too many others, or the crowds will follow.

We stayed at the Peninsula Palace Hotel, considered one of Beijing’s finest. The hotel made our travel arrangements for the approximately 5-hour excursion to Jinshanling, Simatai and Juyongguan. A car and driver cost US$ 180 for the day.

The Peninsula Palace Hotel (8 Goldfish Lane, Wangfujing, 212-903-3073; www.peninsula.com), part of the exclusive Peninsula group of hotels, is consistently voted by travel magazines and their readers as one of the top hotels in Beijing. Its guestrooms are exquisitely decorated, with many rooms offering plasma TV sets and DVD/CD players.

Room rates start at US$ 350, although special offers may be available. Two of Beijing’s best restaurants are located in the Peninsula Palace. Huang Ting, built to resemble the courtyard of a Chinese nobleman’s house, serves superb Cantonese cuisine, including dim sum at lunchtime. Jing, named in 2003 by Condé Nast Traveler as one of the “top 75 hottest tables in the world,” features a blend of western and Asian cuisine.

Brazil: Where to Find Rio’s Best Feijoada
Next Post: Gates of the Arctic: Adventures in Northern Alaska