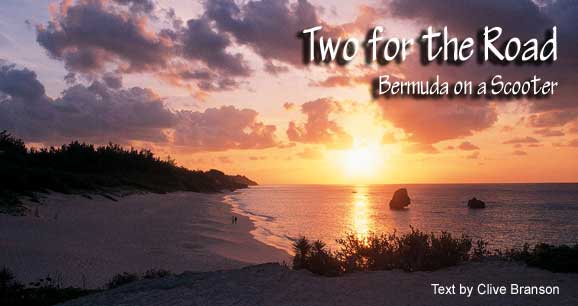 My companion, Samantha, and I had decided to spend our holiday in Bermuda. From the air, the country’s 150 bridge-linked islands look like one side of a Rorschach test. The archipelago’s scorpion shape is a 100 million-year-old volcanic hiccup surrounded by a ring of coral reefs that prevents the land from wave erosion.

After settling into our rental cottage, we took a cab to Oleander Cycles. Samantha climbed onto a scooter and tried it out on the practice course. She looked about as comfortable on it as a red snapper. The agent and I gazed grimly, picturing a catastrophe in the making. When it was my turn, I jumped on, and with cursory abandon, jabbed the kick starter with relish and gunned the throttle.

The engine roared throatily. I released the brake and shot straight into the first curve, flipping head over heels. So much for male bravura. My pride was a bit bruised as I witnessed Samantha shaking her head dubiously. The agent solicitously recommended that we share a bike — at a very reasonable price, US$ 200, for the week. With Samantha clasped around my waist, we sprinted off on what sounded like an asthmatic lawnmower.

As an environmental measure, Bermudian law stipulates only one automobile per household. The country is a mere 21 miles long and a mile wide, and it’s populated by more than 58,000 people, 21,000 of them owning cars.

The added congestion of rentals would be overwhelming, so tourists can travel via bus, ferry or scooter only. The Suzuki scooter is an impressive beast. It goes in the direction you tell it to go before you’ve finished telling it, and stops going while the rest of your cranium catches up. The experience offers a vicarious thrill.

Driving is on the left-hand side of roads no wider than a thin alibi. We enjoyed lazily winding up estuaries of streets or plunging along the coastline beside translucent turquoise water. These occlusive arteries, otherwise known as roads, usually lack a shoulder, or even a sidewalk.

Although Bermuda’s relaxed manner is reflected in the 40-kilometer (20 mph) speed limit, no one takes the slightest bit of notice, judging by how fast they zoom past in their boom-boxed, souped-up Hondas and Peugeots, even if your bike is rattling at its redline of 70 kilometers. Nevertheless, Bermudians are very considerate of tourists, who usually drive their scooters a bit faster than mammal evolution, and give them a wide berth when passing.

We discovered that the horn is the Bermudian way of saying, “hello, cousin.” Car horns aren’t used as a warning, bumpers are, as we discovered a few days later.

We had scheduled our visit for May after being informed by brochures and travel agents that it was considered the “wedding month” for its blissful weather and lack of rainfall. Don’t believe it. It rained intermittently for five consecutive days — nearly the duration of our stay. Bermuda rainstorms are torrential, lasting anywhere from 15 minutes to eight hours.

Sheets of rain stung our eyes, soaked our clothes to the skin, dampened our enthusiasm and made riding as hard as filling out an income tax form.

Ironically, it was on a beautiful day that we were suddenly struck from behind by a Bermuda Telephone van as we were signaling to turn into the entrance to Crystal Caves. I heard a screech, glanced into the rearview mirror and there, careening toward us at frightening speed, as though we were the last piece of chocolate at a weight-watcher’s convention, was a yellow van. The violent impact sounded like a thunder clap.

For a split second everything seemed to happen in slow motion — except for Samantha’s scream — as we tumbled onto the other side of the road. Fortuitously, there was no oncoming traffic.

Once the dust had settled, we groggily did a perfunctory check and discovered that, other than the experience of shock and stiff necks, we were still in one piece.

The van driver and a group of witnesses came rushing to our aid. The Bermudians offered medical attention. The Americans offered legal advice.

A metal basket on the back of the bike had served as a barrier between Samantha and the van. In fact, the only damage to the scooter was the dented basket, shaped like Sam’s back. The van received extensive damage to its front. We appreciated the concern from everyone, particularly the van driver, who was most concerned and conciliatory as we exchanged telephone numbers and pertinent information.

The incident gave us the opportunity to see more of Bermuda than we had anticipated, such as the King Edward VII Hospital — as a precautionary measure. At the hospital, we met a very affable male nurse from England who kept our spirits up. He described that it’s common to see tourists with broken arms or legs from being sandwiched in accidents.

Back at Oleander Cycles, we reenacted the whole story, provided names and numbers, and were immediately given a new bike without any questions. Talk about exceptional service. That evening, the van driver phoned us to inquire how Samantha’s health was. It was a very kind gesture.

We never did get to see Crystal Caves, nevertheless, in the limited time we had, we explored every corner of the island. We took a glass-bottomed boat and snorkeled at the shipwrecked Vixen, off Daniel’s Island. Its rustic bow broke the surface like a breaching whale.

Although the weather was frustrating, there were breaks in the day when the heat reached high temperatures and, like iron fillings to a magnet, we sprawled on several of the numerous beaches — including Warwick Long Bay, Horseshoe Bay and the Natural Arches — where the sand was as soft as talcum powder between our toes and the water as hot as a sauna. The sun replaced towels.

On one afternoon we explored Gibbs Hill Lighthouse, the tallest lighthouse in Bermuda, where we were informed by the proprietor that when a gale occurs, the structure is closed to prevent people from being blown off. Thirty-three feet up in the crow’s nest, we got a bird’s eye view of the terrain: palm trees and verdant vegetation interspersed with countless dots of cotton-candy hued houses.

We enjoyed the Bermuda Aquarium, the Underwater Exploration Institute on Front Street and a glass-blowing studio at the Royal Naval Dockyards. Samantha wore out her credit card on shopping in Hamilton, while I played at the Southampton Princess Golf Club.

There is ample natural beauty to gawk at, including the ruins of 18th century fortifications such as Fort Hamilton, with its dungeon-like passageways that lead down steep stone steps to the sea, or Fort St. Catherine, with its naval museum, but otherwise, Bermuda is renowned as a place simply to get away from the rat race: A place of tranquility, not flash, where it is common to be served cucumber sandwiches and tea on a veranda beside a sparkling pool. It is gentle civility, not bombastic adventure.

We came to the conclusion that the scooter was a godsend in its nimbleness to cover the island. The unanticipated events simply made the journey that much more memorable. The day we left for the airport, the van driver called to wish us a safe trip back and hoped that we would return to Bermuda again. We left on a glorious day, which only made our departure harder.

Traveling by Train in Europe
Next Post: 5 Places in Paris to Inspire Creativity