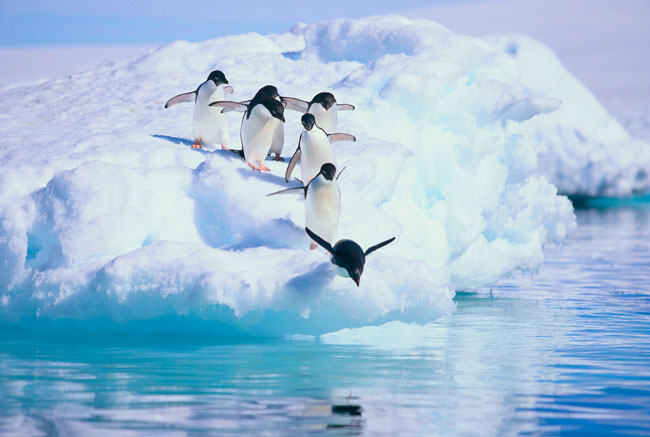 The cry came from a passenger as we were being briefed on Antarctic protocol and conservation.

All 190 guests on the Explorer II rushed to the starboard side of the ship to witness the giant berg, white with distinct horizontal stripes of cobalt blue and turquoise, that seemed to be the size of several city blocks. Close by was a much smaller iceberg, sculpted by the wind and waves and covered with more than a dozen penguins.

At the stern of the ship, several albatrosses floated lazily along. In the distance, close to the jagged mountain peaks of Elephant Island, with its wide glaciers running to the sea, two fin whales surfaced every few moments to blow spray.

While traveling in Antarctica, nature presented a spectacular show upon our introduction to Antarctica, an increasingly popular destination for adventure-minded travelers keen to interact with wildlife and view spectacular scenery untouched by humans.

Over the next few days we explored a part of the world that, in the words of one seasoned traveler, “is the closest I’ve ever come to visiting another planet.”

On average, Antarctica is the driest, the coldest and the windiest continent on earth. It’s also the continent that holds 90 percent of the ice and 70 percent of the fresh water on the planet. During the summer months, most of the beaches, covered with penguins and seals, are more crowded than any in Cape Cod.

Aboard the Explorer II

Our home base for this 11-day eco-cruise was the Explorer II, a 10-year-old luxury expedition ship with a reinforced hull, leased for two trips a season by the upscale Regent Seven Seas Cruises. The normal capacity of the ship is 300 passengers, but Regent keeps its Antarctic numbers to fewer than 200.

Unlike the early explorers, we could marvel at the surroundings, then retreat to gourmet meals and fine wines, comfortable staterooms, a huge library and attentive service by a caring crew. Fourteen countries were represented among the passengers, but most were from the United States.

Many cruise ships now sail around the bottom of South America, skirting the Antarctic islands and mainland without allowing passengers to leave the ship. Explorer II, with its limited passenger load, is allowed by international agreement to anchor almost anywhere and take visitors on its fleet of 12 zodiacs for intimate interactions with the land, the ice and the wildlife.

Key to the success of Explorer II was its team of 14 expert naturalists and scientists who guided the zodiacs on our twice-daily trips and gave illustrated briefings about the wildlife, geology and politics of this vast mushroom cap at the bottom of the world.

First stop, on an overcast but pleasant day (about 45 degrees — 7° C), was Half Moon Island, part of the South Shetlands. Landing the zodiacs and putting our feet on Antarctic territory for the first time was memorable. Not only were we greeted by fur seals lazily guarding the pebbly beach, but more than 3,000 pairs of noisy chinstrap penguins watched us curiously or hopped and walked, Charlie Chaplin style, toward the water or on the rocky slopes.

We were warned not to approach the penguins any closer than 15 feet, but, as we stood still, many of the more curious birds decided to inspect us and waddled over for a closer look.

In the afternoon, en route to the active volcano on Deception Island, we came upon four humpback whales, a common sight, since up to 80 percent of the world’s blue whales come to Antarctica to feed. Our Italian captain slowed down so we could observe the quartet of giant mammals devouring swarms of krill. These small, shrimplike crustaceans are in abundance during the Antarctic summer, and form the basis of the whole food chain. 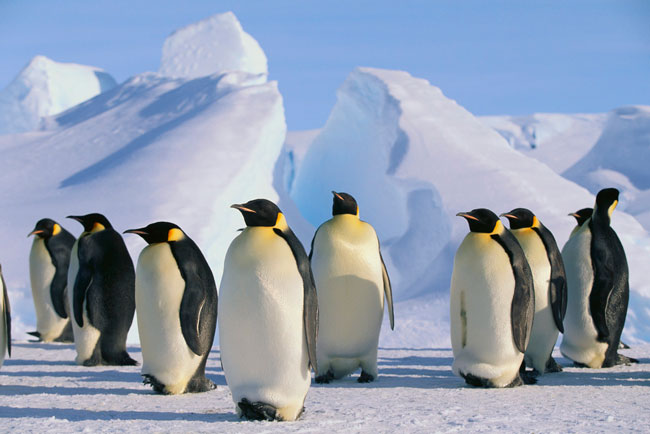 Shortly afterward, we sailed into the volcano basin via a narrow opening in the ring-shaped island and found ourselves in a huge flooded caldera called Whalers Bay formed millions of years ago. During the last century Norwegian whale hunters had a major rendering operation on the cinder beaches, and most of their abandoned equipment was still in evidence.

Plumes of sulphur-laden steam rose from the water’s edge, and several passengers took a polar plunge in the heated water. Fur seals dotting the beach remained oblivious to visitors.

Over the next three days as we sailed farther south toward the Antarctic Circle the weather became warmer — more than 50 degrees (10° C) — and significantly clearer, with brilliant blue skies setting off the magnificent mountain vistas and astonishing number of glaciers.

We sailed through Lemaire Channel at sunset, an impressive narrow route 7 miles (11 km) long and about a mile (2 km) wide with huge cliffs of rock and ice rising straight out of the sea. The twilight tinges of pink, orange and purple added to the magic as everyone stood mesmerized on deck and absorbed the sight of ice, snow, water and ragged mountain peaks against a kaleidoscope of color.

Twice a day we stopped and boarded the zodiacs for visits to islands and the mainland of the Antarctic Peninsula. In several locations we anchored near scientific research stations set up by various governments in accordance with Antarctic treaties.

The British have turned one of their summer research facilities, built in the 1940s, into a museum, post office and gift shop. It wasn’t Wal-Mart, but it was fascinating to buy souvenirs on the only continent with no permanent human residents.

One memorable afternoon, in Paradise Bay, the culinary team set up a lavish barbecue lunch on the pool deck of the Explorer II. Under intense blue skies and surrounded by mountains and glaciers, we enjoyed an extraordinary outdoor feast including roast suckling pig, beef tenderloin and cheese fondue. The scenery was out of this world. The food was too.

We became more serious when global warming was discussed as we got off the zodiacs on Trinity Island, our last Antarctic stop. Once again, on a warm and sunny day, we were greeted by the sounds of hundreds of gentoo penguins and the sight of many giant bones from the whaling era. Even more interesting, however, were the steep-sided glaciers that surrounded us.

Calving activity created a huge roar and splashing of water as massive hunks of ice and snow broke off from the edges of the glaciers and crashed into the sea.

Geraldine Massyn, of South Africa, the assistant expedition leader on Explorer II, has been touring the Antarctic for the past 16 years and has noticed dramatic changes in the landscape. “I have photographs from 1991,” she told us, “and the differences are remarkable. Glaciers have receded substantially and very rapidly in the last five years. These last two years we’ve seen more calving action. Icebergs are cracking and rolling much more often than they used to. So it’s definitely a lot warmer.”

She added that bare islands like the one on which we were standing were often covered with snow year-round. “There’s no snow here and it’s been like this since November.”

Marine biologist Charles Wheatley of San Diego has been an Antarctic lecturer and guide since 1987. He agreed that dramatic changes are underway. “I find that the outer edges of the Antarctic have become less hostile during the summer months. Weather extremes are less.

Even crossing Drake Passage (the turbulent body of water between South America and Antarctica) has become more tranquil. We have more sunny days and fewer cold, windy days, and I’m seeing changes that worry me in the penguin populations, because they depend on sea ice.”

As Explorer II and its passengers and crew reluctantly left Antarctica and headed north for the two-day trip to Ushuaia, Argentina, and a flight home, we reflected on this continent so wild, so primitive and so vast that you can’t possibly take it in in one lifetime, let alone a short voyage.

Our naturalist team leader, Ignacio Rojas, of Brazil, noted that the diaries of early explorers said they’d never come back because of the harsh conditions. Yet, once home, many signed contracts to return.

Charlie Wheatley, the marine biologist and veteran Antarctic visitor, perhaps summed it up best. “This is the most pristine place on the planet, a part of the earth where humans have had limited influence. It’s a wildlife extravaganza and it’s a place that once somebody visits, they’ll go back forever changed. They’ll have a part in their heart where they realize that nature is still in charge and, although things are changing here, it’s still nature as it should be.”

The Benefits of Adventure Travel: Travel Marketing Blog
Next Post: Camiguin Island, Philippines: A Vacation with a Purpose