At 4 p.m. on November 26, 1922, British archeologist Howard Carter lifted an iron rod and hammered it through a stone wall, creating a small hole into an underground chamber that had been sealed for 3,300 years.

Beside him was his friend and patron, George Herbert, 5th Earl of Carnarvon.

The two of them had spent 10 years together in the Valley of the Kings near Luxor, Egypt — shifting sand, moving boulders, digging excavations, studying maps and poring over documents, all in the hope of finding an ancient pharaoh’s tomb.

They had a few small successes, but not enough to keep going. This was their last expedition.

With Lord Carnarvon’s health and money running out, it had all come down to this. If this new chamber was empty? Well….that would be the end. 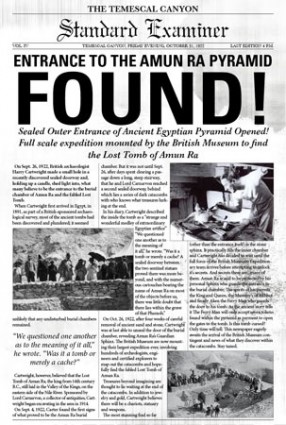 His hand trembling with excitement, Carter lit a candle and pushed it through the hole.

He wrote: “At first I could see nothing, the hot air escaping from the chamber causing the candle flame to flicker, but presently, as my eyes grew accustomed to the light, details of the room within emerged slowly from the mist, strange animals, statues and gold – everywhere the glint of gold.”

The sight struck him speechless. Lord Carnarvon could stand the suspense no longer and blurted out, “Can you see anything?”

They had just discovered the greatest archeological treasure in history – the almost intact tomb of King Tutankhamun.

Over the next four years, Carter would painstakingly remove from the tomb some 4,000 items of incredible beauty.

With all this excitement, what did our two British explorers do after discovering the most priceless treasure in history?

Well, being proper Englishmen, Carter and Lord Carnarvon went to have a cup of tea at the nearby luxurious Winter Palace Hotel in Luxor.

And you can too.

Today, it’s possible to walk down the same 16 steps leading to King Tut’s tomb in the Valley of the Kings just as Carter and Lord Carnarvon did on that fateful day.

Then follow in their footsteps and have high tea on the banks of the Nile River in one of the most historic and famous hotels in Egypt.

Built in 1886, the Winter Palace has changed little since the day Carter told the world about the discovery by posting a notice on the hotel’s bulletin board. Lord Carnarvon had taken a suite in the hotel, and Carter was a frequent guest.

The hotel became the press center for the discovery, which became a worldwide sensation – unleashing what the Americans called, “Tut-mania.”

“The idea of buried treasure is one that appeals to most of us,” Carter wrote.

From grand movie palaces in Hollywood to the famed Chrysler Building in New York, architects became fascinated by Egyptian art, incorporating it into their Art Deco designs, while starlets placed dark black makeup under their eyes to mimic the look of Egyptian women found on 3,300-year-old drawings.

At the center of “Tut-mania” and headquarters for the international press corps following the story was the Winter Palace Hotel.

Today, standing in the lobby, it’s easy to picture men in white suites and hats and women in the long dresses of the 1920s standing on the same tile floor, anxious to hear about the latest treasure coming from the tomb.

The hotel is a classic piece of Edwardian England — as if Downton Abbey had been picked up and dropped in the desert. Which could not be more appropriate.

Lord Carnarvon’s home in England was Highclere Castle – the gorgeous Jacobethan country house that was destined to later be filmed and become the fictional Downtown Abbey.

The outside entrance to the hotel is a curving marble staircase covered with a red carpet. Passing through a wood revolving door, the lobby is cool after the hot Egyptian sun, with a grand staircase at the far end, lined with a curving ironwork balustrade.

Brilliant chandeliers hang from above in a three-story atrium. There are overstuffed chairs, palm trees in brass planters, paintings of famous Egyptians and a most unusual wood and brass shoeshine chair that occupies the center of the room. Hotel staff will greet you with a cold karkade, a refreshing hibiscus tea.

The lobby pours out into the highlight of the hotel — a 40,000-square-meter garden. Filled with 50 different types of trees, the garden offers quiet paths ringed with pink bougainvillea that wind past fountains and small plazas.

Bananas, lime, orange and other fruit trees add fragrance to the air. Keep an eye out for Hod Hod birds that still roam the gardens. The long beak birds are depicted on 3,500-year-old drawings in the nearby Luxor Temple.

The gardens originally grew fruits and vegetables for the hotel’s guests, but today there is a swimming pool, outdoor bars, and quiet nooks to sit and relax. Agatha Christie stayed at the hotel and enjoyed long walks in the garden.

It was on a hotel balcony overlooking the Nile that she wrote her classic mystery, Death on the Nile. Noel Coward, Jane Fonda, Richard Gere, and John Malkovich, are among the many celebrities who have stayed here and walked in these gardens.

When China’s President Xi Jinping visited Egypt on a recent trade mission in January 2016, Egypt’s President Abdel Fattah al-Sisi hosted and met with him at the Winter Palace.

High tea in the Victorian Lounge is special. After the heat of the day, this opulent room is cool and dark with a crystal chandelier, pink oriental carpets, and historic paintings of scenes along the Nile.

King Farouk loved the ritual of high tea and many times enjoyed macaroons, scones, crab and shrimp sandwiches and other treats in this room.

Another highlight is the Nile Terrace, the hotel’s huge block-long outdoor balcony overlooking the Nile. It was on this balcony that Carter and Lord Carnarvon first met and formed their partnership.

Tea or cocktails can be enjoyed here at sunset, as feluccas, the traditional wood sailing boats, glide up and down the river, their distinctive triangular lateen sails catching the last light of the day.

Luxor has dozens of horse-drawn carriages and the familiar clip-clop of horses going by only adds to the timeless quality of the hotel.

And of course, no stay would be complete without a cocktail or a Pimms in the Royal Bar. The library-inspired red room is covered with books and has amble table and chair settings for a quiet drink before dinner.

The Curse of the Pharaohs

Unfortunately, the discovery of King Tut’s tomb was the highpoint for Carter and Lord Carnarvon. Within six months, Carnarvon accidentally cut a mosquito bite while shaving.

The cut became infected and his weakened body caught pneumonia. Though he was rushed to Cairo, he soon died. Reporters started a rumor that his death was the curse of the pharaohs – revenge by the ancient kings for having entered their tombs.

It was said that all the electricity in Cairo went out at the moment Lord Carnarvon died. Others who worked on uncovering the tomb were also said to have died in unusual circumstances.

Of course, there were no facts to the story, but Hollywood loved it, and to this day, they are still making films about a mummy’s curse.

Carter also did not fare well. He had frequent arguments with the Egyptian government, and was removed from the site, only coming back later to work his remaining years cataloging items from the tomb.

His house nearby in the Valley of the Kings is now a museum detailing his accomplishments.

All 4,000 items from the tomb now reside at the Egyptian Museum in Cairo and will soon all be on display together for the first time in history in the spring of 2018 at the new Grand Egyptian Museum.

The new $1 billion museum marks a huge change for the treasures of Tutankhamun. But if you want to go back in time to where little has changed, book a stay at the Winter Palace.

The Winter Palace has 92 rooms and is a Sofitel with rates starting at $160 US. Nile views are the classic rooms, but the garden view rooms are also magnificent.

Many rooms offer balconies. www.sofitel.com High tea is served from 4 to 6 p.m. The hotel also has a formal French-inspired restaurant, 1886 (jacket and tie required for men).

The Royal Bar is less formal, but jeans and sports shoes are discouraged. Under the current political situation, Egyptian tourism is way down and the hotel is lightly occupied.

Ask Mr. Mohamed Ali, who has worked as chief concierge for 24 years, nicely, and he might give you a tour of the Royal Suite where Princess Diana stayed.

The hotel is a short walk from Luxor Temple and an $8-10 horse-drawn carriage ride from the Temple of Karnak. Day trips to the nearby Valley of the Kings and King Tut’s tomb can be easily arranged.

Author Bio: After 35 years of doing public relations for Visit Denver, Rich Grant is back to his first job as a freelance travel writer and is a member of the Society of American Travel Writers and the North American Travel Journalists Association.  He and Irene Rawlings are co-authors of “100 Things to Do in Denver Before You Die,” Reedy Press, April 2016.

Mitad del Mundo: Journey to the Center of the World
Next Post: Small Ship Cruising in Baja California Sur