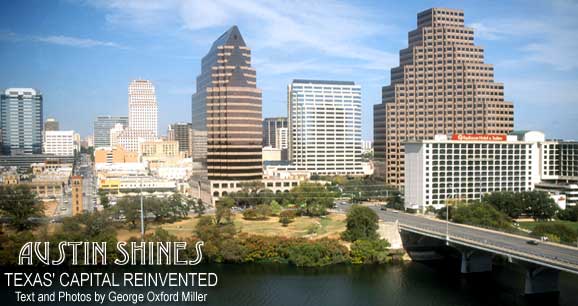 If you want to hear razor-edged political humor about George W. Bush, don’t go to Washington, D.C. Don’t even watch the Comedy Channel. Go to Austin, Texas’ capital city. Buy a ticket to Ester’s Follies Comedy Club on the city’s hip Sixth Street and brace yourself for an evening of TeX-rated humor. The Follies upholds a three-decade tradition of turning back-room whispers from the political movers and shakers into stage-front guffaws.

We’re warned not to sit too close to the front unless we want to be a part of the show. Sure enough, the actors roam into the audience and drag a woman on stage. As the review progresses, skits roast politicians, football, rednecks and the crowd of gawkers staring in the storefront windows behind the stage. Austin has always been a tell-it-like-it-is city with no scarcity of audience involvement.

When the Follies began its run in 1977, the town boasted a 15-minute rush hour and the hubris of a teenager. With a booming economy, new fern bars opened on Sixth Street almost weekly and construction cranes hovered over half-built skyscrapers like oil derricks waiting for a gusher.

By the ’90s, Austin had pledged allegiance to a cybertech future and the city boomed with the rest of the nation. Now, Austin boasts a new airport and a rejuvenated downtown with a high-tech convention center, art and history museums, new and renovated hotels, and not one, but two music-and-restaurant districts.

The Sixth Street strip, from Interstate Highway 35 to Congress Avenue, is the main downtown street. It is here that the pace was set in the ’70s with a half-dozen clubs and several restaurants. Disco was dead, so the clubs featured local bands. It didn’t take long for the town to discover what 50,000 college students knew all along: Austin rocks. The vibrant music scene propelled Janis Joplin, country musician Willie Nelson, blues legend Stevie Ray Vaughan and a dozen other bands into gold records. Homegrown music became as much a part of Austin’s identity as longhorns and bluebonnets.

Now, the city bills itself as the “live music capital of the world.” More than 100 venues play everything from country twang and Texas swing to jazz and techno rock every night of the week. In the Warehouse District, a well-seasoned restaurant mix complements jazz, salsa, blues and retro bands with music from the ’50s and ’60s.Besides Ester’s Follies, the 1970s produced a musical upstart that became the standard bearer for Austin’s musical reputation: Austin City Limitsbegan 25 years ago in the back room of the University of Texas’ Public Broadcasting Station, KLRU. Willie Nelson cut the pilot show in 1975. Despite its name, the show was never intended to be about boundaries or local music. It celebrates the diversity of American music heard in Austin clubs. The show now plays on 300 stations and reaches 25 million viewers. No wonder musicians consider it the most sought-after gig in the business.

The station conducts public tours of the soundstage on Friday mornings. We step out of the elevator into a hall decorated with photos of past performers. It’s a who’s who of popular music. More than 400 musicians have played country, rock, Zydeco, bluegrass, blues and Latino music on the show.

While Austin has a plethora of new businesses, hotels, clubs and restaurants, it hasn’t abandoned the icons of its past. The state capitol recently completed a US$ 187 million renovation with an added underground expansion the size of 15 football fields. The historic Driskill Hotel, built in Romanesque style in 1886, reclaimed its position as the focal point of downtown elegance with a US$ 35 million restoration in 1999.

The concierge shows us the Cattle Baron’s Suite. The US$ 2,500-a-night, two-bedroom pad includes a living room with a home-entertainment center; a dining room with a 12-setting table; and a master bedroom with an oversized whirlpool tub and a shower with six shower heads. In November 1964, Democrat Lyndon B. Johnson, the 36th president of the United States, checked in on his election night and listened to the results in what is now a banquet room.

Though President George W. Bush and the Republicans dominate today’s Austin, the influence of the Johnson era still resonates. The Lyndon B. Johnson Presidential Library, a fixture on the University of Texas campus, presents a permanent exhibit that documents the events of the 20th century that lead up to the turbulent ’60s and Johnson’s presidency. Traveling exhibits showcase contemporary artists, photographers, poets and writers.

Another of Lady Bird’s legacies, the Town Lake hike-and-bike trail, follows the impounded Colorado River, which flows through the heart of Austin. The scenic downtown greenbelt is one of Austin’s defining features. From our room on the 14th floor of the Hyatt Regency, we see a panoramic view of people jogging on the trail around the lake, the Congress Avenue Bridge with its colony of 1 million Mexican free-tailed bats and the evening light illuminating the skyline.

Reflections in the glass-and-granite buildings fade from sunset gold to purple and violet. A canoe cuts silently across the velvet surface of the lake. The scene resembles a painting with vibrant colors applied with broad brush strokes. Which is exactly the way Austin paints its future in the new millennium.

Partying with Ben in Philadelphia
Next Post: Disney World for Grownups