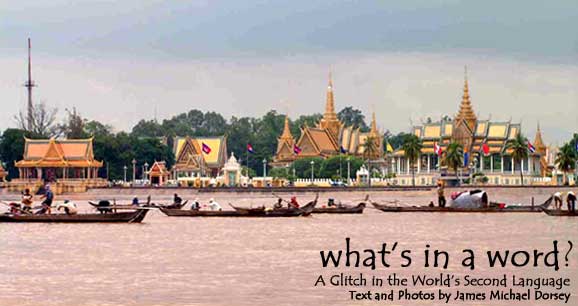 Winston Churchill once said that the Americans and British are two peoples separated by a common language. The more countries I visit, the more this seems to be true all over the globe. For better or worse, English has become the second language for most of the world.

I never cease to be amazed by people who speak impeccable English in the mountains of Peru or the jungles of Cambodia. But I have found that an accent can make quite a difference.

Recently my wife and I, along with a travel companion, were in the tiny town of Battambang in central Cambodia. We hired a guide to take us up the river to our next destination at Siem Reap. This was to be a six-hour trip followed by crossing Lake Sap, the largest lake in Central Asia.

Battambang is an extremely poor area, and our mode of transport was a very small and battered boat, not much larger than the three of us. With six bags lashed to the bow, four travelers and the boatman, I figured we were overloaded by at least a ton. We frequently had seen four or five people on a single motorbike so no one but us was concerned about our weight.

We had been on the water only a few minutes when our pilot made for shore and hopped from our boat to another. Our guide said not to worry, he would only be a minute. He then added, “We need to pick up live chickens for their legs.”

My wife and I exchanged glances. We are pretty open-minded, especially when traveling in the developing world. However, it was obvious there was little room in our tiny vessel for live chickens.

If we had to take them along, we were willing to hold them on our laps — there was no place else to put them. The thought even occurred to me that perhaps the chickens were needed if the boat’s tiny engine stopped in the middle of nowhere.

I had a vision of us holding them over the side of the boat while their tiny legs paddled away, guiding us to safety. After all, our guide said we needed them for their legs.

We proceeded to make numerous jokes about live chickens towing us to shore if we capsized or about eating them if we became marooned in the jungle. Meanwhile, our guide just gave us puzzled looks.

Finally, my wife turned to him and asked, “How many chickens are we taking?” At first he seemed totally bewildered by this question, then a large smile spread over his face. He bent over and began to laugh uncontrollably.

My wife turned to me and said, “I’m glad he thinks us holding live chickens on our laps for six hours would be funny.” When he finished laughing, he looked at us and very loudly enunciated: “No live chickens! What I said was, we need life jackets for the lake!”

It took a moment for this to sink in. “Life jackets for the lake” when filtered through a Cambodian accent came to my ears as “Live chickens for their legs.”

Suddenly we all found this to be profoundly funny and for the next six hours chicken jokes abounded.

Whenever we made eye contact, our guide would laugh, shake his head and say, “America, so funny.”

The Way of St. James: El Camino de Santiago
Next Post: Milwaukee Revisited: What to See and Do