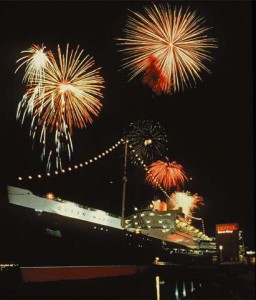 The Titanic may be the most famous ship in history, but the majestic Queen Mary, which is permanently docked in Long Beach, California, is an even bigger ship with a fascinating history all her own. Unlike the Titanic, the Queen Mary is still with us, now as a hotel, a collection of restaurants, private celebration rooms, a wedding chapel and much more.

The ship is marked by tall tales, extravagant stories of celebrities, war-time stories and even ghostly hauntings that are recreated in wonderful tours that share not only tales of the paranormal but the historical, as well.

Now permanently docked and open for visitors in Long Beach, California, the Queen Mary is more than 136 feet long than the Titanic and 34,908 pounds heavier than her ill-fated counterpart that sailed some 20 years before her. And in her day, the Queen Mary was unlike anything the ocean had known. Yet if true be told, neither Queen Mary herself nor the current Queen Elizabeth ever actually sailed on the ship.

In the Queen Mary’s heyday, the rich and famous considered a transatlantic crossing aboard the Queen Mary the only way to travel. Notable passengers included Greta Garbo, Gloria Swanson, Clark Gable, David Niven, Bing Crosby, Elizabeth Taylor, Aristotle Onassis and Mary Pickford, among many others. Bob Hope was known to ply his golf swing from the upper decks, and Fred Astaire danced in the ballroom.

Celebrities were frequent travelers on the Queen Mary…notably, Queen Mary’s eldest son, the Duke of Windsor (formerly King Edward VIII) and his Duchess. The Duchess took 88 pieces of luggage on one visit and had to book a stateroom for the luggage alone!  In those days, however, changing several times a day was the norm for the first class passengers.

All 800 first class passengers could be served at once in the largest dining room built within a ship. This dining room appeared in “The Natural” with Robert Redford, using it as a hotel suite, and also in the movie “The Poseidon Adventure.”

When she was first conceived, some actually thought such a ship impossible to build. It took 3 ½ years and cost 3 ½ million British Pounds to complete her in the shipyards of Scotland. Thousands of people throughout Britain worked on her, bringing to bear hundreds of years of experience in the art and craft of shipbuilding.

Queen Mary herself pressed the launch button that released her massive namesake into the River Clyde in 1934. Stamp collectors were so anxious for her postmark that the crew had to load 6,000 sacks of mail! By 1938, she achieved the transatlantic crossing in just under 4 days—a world record she held for 14 years.

But the luxury ocean liner did her duty in wartime, too. At the outbreak of World War II, “Queen Mary” was conscripted into service and transformed into a troopship overnight. Her luxurious fittings were removed, and bunk beds were installed for the military passengers, who could be transported 5,000 at a time. Eventually, 16,000 troops could be accommodated, and no ship, before or since, has carried so many people. Sleeping berths occupied drawing rooms, loungers and even drained swimming pools. The berths were stacked six high and were shared by two or three men who slept in shifts during the 4-day Atlantic crossing. At the same time, the once-elegant dining room was converted to a 24-hour mess hall.

On the outside, the ship was camouflaged with gray paint and was so fast she was able to out-maneuver German torpedoes, becoming the scourge of the Nazi U-Boats. So fast and effective was she that Adolf Hitler offered $250,000 and Germany’s military honor to the captain of the boat who could sink her. But nobody could.

Winston Churchill even used the ship as his sea-borne headquarters and even signed the D-Day invasion plans while secretly on board.

The Queen Mary carried American, Canadian and Australian troops, transported German and Italian POWs, and served as hospital ship and bridal transportation all without ever firing a gun in anger or losing a single passenger to enemy action.

By the end of the war, “The Grey Ghost” as she was fondly called, had carried more than 800,000 troops, traveled more than 600,000 miles and played a significant role in virtually every major Allied campaign.

In February 1946 she began her “Bride and Baby Voyages” and transported more than 22,000 war brides and their children to the United States and Canada. After the war, the Queen Mary resumed her elegant status, but with air travel an increasingly more safe and affordable alternative, her days of transatlantic voyages were numbered.

In 1967 she sailed for the last time from Southampton England to her new permanent home in Long Beach, California. The city of Long Beach paid $3.45 million for her with plans to turn her into a museum and hotel.

The next highest bidder had intended to sell the ship for scrap. Fortunately, today she is listed on the National Register of Historic Places and is run by a non-profit organization.

Visitors today are invited to again enjoy her 365 Art Deco staterooms and a host of  quaint shops. There are eight full suites and furnishings including rich, wood paneling (56 kinds of wood were used to represent the 56 British possessions around the world), vaulted ceilings, Art Deco built-ins, original artwork and, of course, portholes for outside rooms. There’s even the Royal Wedding Chapel that can hold up to 200 guests, if the mood strikes you. Hotel rooms begin at $75.

Many people believe the Queen Mary to be haunted, so the ship recently encouraged the speculation with the introduction of the “Ghosts and Legends” tour. This is an interactive, state-of-the-art, special effect attraction that blurs the line between what’s real and what isn’t, and dramatizes actual paranormal and historic events reported over the past 60 years. It takes skeptics and believers alike to never-before seen areas of the Queen Mary that are supposed to be haunted. For the first time, the public can see the six-story high boiler room; even during her sailing days, access to these areas was restricted to crew members only.

The $4 million experience utilizes special effects and passengers “survive” encounter after encounter as they attempt to escape the unexplained phenomena in the ship’s eerie lower decks. Then, the shudder of two ships colliding rocks the cavernous boiler room area, sending passengers “running for their lives” as a deluge of water seem to burst through the hill.

Officials say a ghost needs to be seen four dozen times before it is included in the tour.  The last ghost is believed to be of a sailor trapped in 1966 in a closing door. In all, it’s believed 50 people have died aboard the ship (many were during the wartime and many were GIs, when no records were kept). Most poignant is perhaps the little girl who drowned in the swimming pool. Several visitors have seen her on the tour. The Art Deco pool is still there but is no longer in use. This pool has been described by paranormal experts as the vortex for ghostly activity aboard the ship and the location where spirits from other realms enter the ship.

Over the years, there have been documented report of women dressed in vintage bathing suits wandering the decks near the pool, the sound of water splashing, children’s laughter and watery footprints leading into the changing room.

Several workers died during an engine-room explosion, and in 1942, several deaths again occurred when the Queen Marcy collided with HMS Curacao, slicing the smaller ship in two. The small vessel sank in a very short time, but the Queen Mary was under strict orders not to stop for any reason and was unable to pick up any survivors.

Visitors seem to really enjoy this tour and there’s always someone who quips that although he didn’t see any ghosts on the tour, he did see his money disappear.  Alternatively, someone will say he wasn’t scared of anything until he saw the prices!  In truth, the prices are actually very reasonable.

At the ship’s launch in Clydebank Scotland in 1934, Lady Mabel Fortescue-Harrison, a prominent English astrologer, predicted: “Most of this generation will come, including myself, when this event occurs.  However, the Queen Mary, launched today, will know its greatest fame and popularity when she never sails another mile and never carries another passenger…”

Harrison died in 1956 but her prediction could not have been more accurate. Today the Queen Mary receives more than 1.5 million visitors per year…(How did she know?  Now that’s spooky.)

Her designer, Sir John Brown of Glasgow Scotland, who also designed the Queen Elizabeth, the QE2 and the Royal Yacht Britannia, said the Queen Mary was one of the greatest achievements of British flair and craftsmanship.

She no longer crosses the Atlantic, but the Queen Mary still continues to “transport” her passengers through a journey of history, romance and discovery. She is, without doubt, the grandest ocean liner ever built.