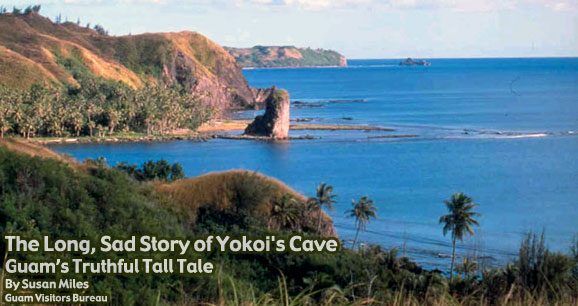 My Recent Trip to the Island of Guam

There are stories that we hear that sound too bizarre to be true. More often than not, we put them down as nothing more than urban myths.

However, one of the joys of travel is the unexpected discovery that some of these tall tales are true. I made such a find on a recent trip to the island of Guam.

This resort island, designated a US territory, is approximately 1,550 miles (2,494 km) south of Japan. Bordered by the Philippine Ocean to the west and the Pacific Ocean to the east, Guam is a popular holiday destination for overworked Japanese.

Those versed in military history will know Guam as the staging point for the US forces victory in the Pacific after successfully invading and recapturing the island from the Japanese in 1944.

The US military have remained on Guam until the present day, with Anderson Air Force Base situated in the north and a Naval Station in the southwest of the island.

The presence of these military installations may help explain the proficiency of American-style restaurants like Hard Rock Café, Planet Hollywood, TGI Fridays and department stores on an island that is only 30 miles (48 km) in length.

The Strange Yet True Story

But away from the beachfront hotels, the designer outlets and the steakhouses, a strange but unique story of World War II is retold.

In the south of the island, amongst the lush jungle interior, the Ugum River gently cascades over a series of waterfalls, known as the Talofofo Falls.

The falls make for a picturesque location to enjoy the lush beauty of the Guam landscape. But the real interest of the area lies at the end of walking trail 10 minutes from the base of the falls.

Here, the heroic yet tragic tale of Shoichi Yokoi, a World War II Japanese soldier is recorded and remembered by a simple plaque and Buddhist shrine.

As the US forces invaded and steadily reclaimed Guam in 1944, Japanese forces retreated to the cover of the island’s jungle terrain.

The Tragedy of this Tale

Three soldiers, including Shoichi Yokoi, took refuge in the jungle surrounding the falls, constructing a simple and cramped cave in which to hide from the invading forces.

The tragedy of this tale is that the Japanese soldiers’ resourcefulness and ability to stay hidden meant their presence went undetected by the US forces.

Their self-imposed isolation in the Guam jungle ensured that the surrender and eventual conclusion of World War II went unnoticed by this intrepid trio.

Yokoi’s two comrades, Jiji and Nakahada, eventually died of food poisoning during their jungle hiding. However, Yokoi amazingly survived 28 years in his cave before being discovered by local farmers in 1972.

The actual cave built by Yokoiand his fellow soldiers has since collapsed. Its original location is obliterated from view by the lush jungle growth.

In its place a replica cave has been created, nothing more than a hole in the ground, nestled beside the shrine and memorials to the three soldiers.

It is interesting to watch visiting Japanese tourists pay their respects at this memorial to their Japanese hero.

Irony of this Story

He is admired for his ingenuity and resourcefulness to survive for nearly three decades, invisible to the outside world.

It is hard to stand at this site and not dwell on the irony of this story, for although Yokoi did eventually return to Japan, the loss of half a lifetime to this futile and unnecessary feat is the ultimate tragedy.

This important phase of Guam’s history is remembered in other points along the island’s coast. On the east coast, a short drive from the resort area of Tumon Bay in Agat Bay is Ga’an Point.

Here, the Guam, American and Japanese flags fly side by side overlooking a mounted WWII Japanese artillery gun, one of the few preserved after the recapture of the island in 1944.

Farther north along Highway 1 at Asan Beach is the “War in the Pacific National Park.”

Here, descriptive plaques detail the landing by the US forces and show photos of what this now tranquil and peaceful beach looked like only hours after the Americans landed.

To learn more about the story of Sergeant Shoichi Yokoi and his 28 years hidden in the Guam jungle, you can visit the Guam Museum in Hagatna where the tools and implements he fashioned to aid his survival are on display.