Peering over our dive boat, floating over Stingray City, a series of shallow sandbars found in the North Sound of Grand Cayman, Cayman Islands, I watched as dark shadows moved below. Giant gray tablecloths swooped under the boat. Yet, I had imagined the little stingrays you can touch at the aquarium. These here in the islands were of another universe.

Stingrays have long tails, or rays, to defend themselves, but supposedly don’t attack at these tourist-laden feeding grounds. I watched the giant ghosts convene, their beady eyes like knowing marbles atop of their gray swampy bodies. Their bellies were as white as snow, with large, toothless, gaping craters for mouths, muscular enough to rip dinner out of shells, or worse.

I was going to dive with these amazing creatures. After a deep breathe, I geared up and took the plunge for the last scuba dive of my honeymoon. Swaying with the current, 12 feet underwater, I sat cross-legged on the sandy bottom of the Caribbean Sea, 500 miles south of Miami. 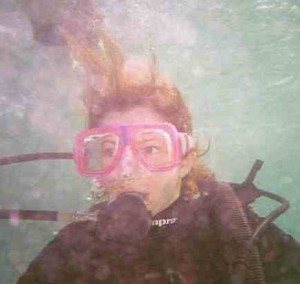 The water ran cold down the back of my black neoprene wetsuit while hordes of the giant prehistoric-looking stingrays soared through the water all around me, looking for bloody bits of squid and octopus.

My husband was totally absorbed in his own scuba antics, and I watched as he eagerly snapped underwater pictures of the giant monstrosities.

Then the sonar stingrays moved in toward me, smothering me with their giant forms. One chomped down on my arm so hard I thought a shark bit me. Fortunately, the bite was over my wet suit, so no blood trailed behind me, and my arm remained attached.

I screamed out loud, though underwater, in pain and shock, but my husband remained completely unaware of the attack. He had no idea what could befall him any minute, and I was at a loss to communicate the danger without alarming him. I watched him dance with a new stingray, trying to kiss it.

My thoughts were interrupted when a large, pink, plastic fin whacked me in the head – from a snorkeler swimming above me. My regulator popped out of my mouth. Instinctively, I grabbed it, brought it back to my mouth, exhaled the water out and resumed breathing with relief.

Visibility disappeared as divers kicked up the sandy bottom. A guide from the boat swam toward me with a container of bait, but I held up my crossed index fingers and swam away.

Yards away, my husband motioned me near. Handing me the underwater camera, he posed for a picture with his new, slimy aquatic buddies.

Back on the boat, my husband inspected the huge black-and-blue welt on my upper arm. There were also other divers on the boat with battle wounds. One man had a bloody bite at the edge of his round, protruding belly, which was not quite covered by his T-shirt.

At home, I proudly showed off my mammoth bruise, a relic of my ocean adventure. My arm was sore for months to come. I returned to the rhythm of my humdrum reality.

A few months later, as I stared at the sterile white walls of my windowless workplace, I thought of the Cayman Islands. And I couldn’t help but laugh. It’s not every day that you’re attacked by a gigantic, wild sea creature.

The Best Places to Go On Land in the Cayman Islands

Cayman Turtle Farm
The biggest turtles you’ll ever see, plus some you can touch. Endangered species are raised and released back into the sea. 345-949-3893

Te Queen Elizabeth II Botanic Park of the Cayman Islands
Visit the endangered Blue Iguana and bask in the beauty of Cayman’s blossoms. 345-947-3558

Pedro St. James
A national historic site called “the birthplace of democracy in the Cayman Islands.” The view from here is gorgeous! 345- 947-3329

Rum Point Beach
Enjoy a siesta in a hammock on the beach while you get away from it all at this hidden oasis.

Olde New Castle: Where America’s History Lives on Every Street
Next Post: My Chef’s Tasting Menu Lunch with Wine Pairings at Carneros Resort in Napa