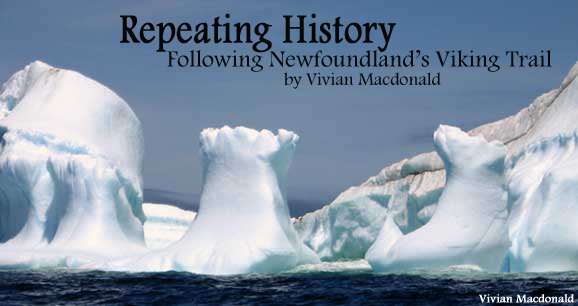 As our boat approaches the iceberg, the strains of lush orchestral music float over the waves. Travel in Newfoundland is filled with adventure.

“It wouldn’t be an iceberg without the theme from Titanic,” says Paul Alcock, who clearly has a warped sense of humor.

We are aboard the Gannett III, owned by Alcock, his father, Louis, a former cod fisher who is at the wheel, and his uncle Jack.

Alcock, a biology graduate from MUN, otherwise known as Memorial University of Newfoundland, was looking for the way and means to stay in his native Newfoundland rather than leaving the island for work elsewhere.

The Gannett III, which sails out of St. Anthony, is the successful solution.

“I’m a born and raised Newfoundlander,” Alcock tells us with pride.The iceberg is beautiful. It glows in the early afternoon sun.

The power of a take-your-breath-away moment is stunning. The boat slowly circles the berg, at a safe distance (these things can roll at a moment’s notice), each facet lovelier than the last.

Once the music ends, there is silence but for the click of cameras.

Alcock begins his monologue – articulate and amusing. He talks about the geology and geography of his home province and about the marine life. Although it’s early for whales, we are lucky.

“What we’re looking for today is a spout or blow of six or eight feet, like a puff of smoke, that will be slow to fade out. So if you see something like this, don’t be shy. Holler ‘thar she blows’!”

There are no big blows, though. It’s the minke whale that we spot. It weighs about 4 to 5 tons, we are told, as it swims beneath our 25-ton boat, creating a little wave action.

It’s Alcock who alerts us. “Whale at one o’clock,” he shouts. “One-thirty Newfoundland time.” (It’s an old Canadian joke, the ½-hour time difference between Newfoundland and the mainland.)

The Magnificent Nature of Sea

As it was at sea, silence is frequently the case along Newfoundland’s Viking Trail as visitors are left speechless by the magnificence of nature’s artistry.

The 400-kilometer (249 mile) route is between Gros Morne National Park on the west coast of the province to its northern tip and L’Anse aux Meadows, the ancient site that is the first authenticated presence of Europeans in North America. Both are UNESCO World Heritage sites.

The Viking site, which dates to 1000 AD, is 40 kilometers (25 miles) from St. Anthony. It was discovered in the 1960s and, it is speculated, could be Leif Ericson’s short-lived Vinland camp.

A visit begins at the interpretative center where an audio-visual history lesson is available. “Listen, and I will tell you some stories of a place called Vinland.”

So begins the tale of the Nordic seafarers and their connection to Newfoundland.

The story continues with a guided tour of the open, windswept area where the remains of three dwellings, four workshops and an iron-working smithy are found.

As we begin our walk across the barren terrain, known as tuckamore, a fine sculpture stands stark against the sky, symbolizing the meeting of the Vikings and the aboriginal people.

The arms of the arch do not touch, however, explains our guide Scott Howell “because their worlds did not touch” but existed side by side.

There may have been a reason: “The Vikings were just a little paranoid,” which also explains their choice of site at the end of the Newfoundland world where they could see for miles across land and sea.

There is another advantage to the site for modern people: The tannic acid in the bog has helped preserve organic materials such as wooden barrels, thus adding to our knowledge of the early Nordic world.

The acid also helped to preserve “a nice big pile of garbage,” says Howell. “Garbage is treasure to an archaeologist.”

At the end of the tour, we huddle for warmth – it’s an unseasonably cold June – in a replica Viking dwelling, entertained by a local “Bjorn the Beautiful” who regales us with stories of bygone days – in a Newfoundland accent, of course.

It’s warmer as we drive south toward Gros Morne. The route winds through spectacular countryside  – the forests and barrens of the north, with vegetable gardens planted in the ditches, which are fertile and accessible, giving way to the rugged coastline near Port aux Choix.

We stop for a visit with folk artist Ben Ploughman, who creates one-of-a-kind 3-D wooden pictures “to tell a story.”

His background in petroleum geology is evident in the large depiction of an offshore rig just inside the door of his studio.

He is a charming, affable man whose whimsical sense of humor comes through in his work.

His Twelve Angry Fishermen, for example, portrays a row of 12 men in rain-weather gear peeing into the ocean, their comment on the cod fishery moratorium.

A two-hour drive from Port aux Choix, in the heart of Gros Morne, is the town of Rocky Harbour, a lively little place with easy access to all areas of the park as well as convenience to accommodations, food and drink.

We stayed at the Gros Morne cabins, simple and clean, overlooking the sea and a short walk from downtown cafes and restaurants.

The best of these is Java Jack’s Café and Art Gallery where there isreal coffee (latte, cappuccino, espresso) and baked goods for breakfast, a great gift shop and art gallery and an excellent restaurant with big-city style menu.

The following day we head for Western Brooke Pond, which is actually a fjord (Newfoundlanders have called many a body of water a pond – or a brook or a bight or a tickle).

It’s a three-kilometer (1.9 mile) walk to reach the dock from which boat cruises embark, part of it on a boardwalk over marshland, part on the forest floor.

This ‘pond’ is like none you’ll ever see outside Norway – massive billion-year-old cliffs plunge into the waters of the fjord, waterfalls cascade down the cliffs from ponds atop the plateau, holding passengers spellbound as the small boat sails the narrow passage.

The next day we explore the southern area of Gros Morne, out to Woody Point and Trout River.

Once again we find the splendor of the park in the Tablelands of the interior and coastal waters of the peninsula.

The artistry and accompanying challenges of nature here – and elsewhere on this island known as The Rock – have inspired many an artist: painters, carvers, weavers, knitters, potters, photographers, writers, musicians.

Almost every town and village has a studio and/or shops that display the talent of those such as Ben Ploughman, and Joan and Charlie Payne who own The Hunky Dory in Woody Point.

Charlie Payne is third-generation Woody Point and his wife, Joan, is from Norris Point across the bay.

Charlie Payne works in wood, and is a musician, and Joan works in wood and fabric. They run the shop in the summer  and do their art in the winter when it’s very quiet in Woody Point.

The town, 72 kilometers (45 miles) from Rocky Harbour, is a lovely place to stop for lunch, poke about the shops and spend time admiring the clapboard “salt box” homes that are the traditional style here in Newfoundland.

The Old Loft restaurant overlooking Bonne Bay is the perfect place for lunch.

It is a restored fishing loft with rustic, wooden furniture, friendly people and fresh, fresh, fresh fish and seafood.

Just outside the town is the impressive Discovery Centre housing a museum where visitors can learn about the forces of nature that have shaped the land and an excellent art gallery where local artists exhibit their work.

Trout River is a tiny fishing village about 20 kilometers (12 miles) from Woody Point, picturesque and quiet “as though time has stood still,” says my travel companion.

Down a steep, narrow hill at the end of the road, it stretches out along the sea with a fine, long beach at the foot of the headland and, at the other end of town, a sheltered harbor from which an active fishery operates.

The Seaside Restaurant at the beach is a fine place for lunch.

Between Trout River and Woody Point is the beautiful, barren landscape of the Tablelands, an area of “complex geology and stunning scenery,” as described by Tourism Newfoundland and Labrador.

The Tablelands is a mountain of flat-topped rock usually found only in the Earth’s mantle and is truly awe-inspiring whether you simply drive through or stop for a short walk or a long hike.

All of the Viking Trail, in fact, is awe-inspiring. As the tourism officials say: “Getting here is the easy part. It’s the leaving that’s difficult.”

Newfoundland and Labrador (the two areas form one province):www.newfoundlandandlabrador.com

Vivian Macdonald is a Canadian freelance travel writer based in Stratford, Ontario.