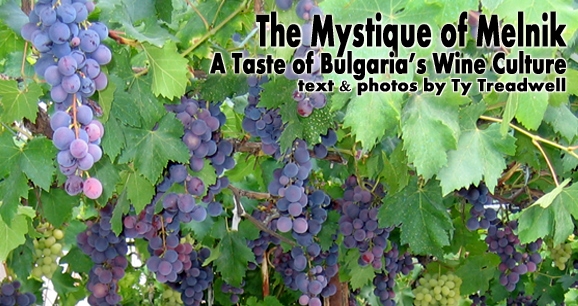 To call the atmosphere in the wine-tasting room elegant would be a bit of an exaggeration.Instead of a table, my wife and I are seated around an empty wine barrel draped with a hand-embroidered red tablecloth.The seats themselves are nothing more than tall chunks of log, which have been cleaned and polished. The walls and floor are rough stone, and besides the half dozen tables the room is empty except for more wine barrels, full ones this time, lining one wall in an orderly row.

Although a few electric lamps have been attached to the walls, they are turned off.  The only light source is a weak stream of sunlight filtering in through the cave opening.I did mention that we were sitting in a cave, didn’t I?

On a hot summer day in Bulgaria it can be quite pleasant to while away an hour or so inside a cool, shady cave with a plate of spicy dried sausages on the table and a glass of robust red wine in hand.

My introduction to the town of Melnik is just beginning, and so far I am hooked.

As the husband of a Bulgarian wife, I’ve traveled frequently to the country over the past six years. I’m well acquainted with its culture and cuisine, which closely resembles that of Greece, although Bulgarians proudly claim authorship of every delicious recipe, which we Americans think of as Greek.

I’ve also become aware of how affordably an American can travel in Bulgaria since the euro isn’t used there and the exchange rate of the local lev weighs heavily in our favor. My first visit to Melnik, however, is a totally new experience.

From the capital city of Sofia, Melnik can easily be reached by a combination of trains and buses.  My wife and I chose to rent a car instead to savor the beautiful landscape at our own pace. As we drove south I was overwhelmed by the wide variety of blossoming trees we passed.

Cherries, peaches, apricots, figs and almonds all flashed by in a colorful blur, their intoxicating smell drifting in through our open windows. When faded signs for Melnik appeared we exited the main road and found ourselves in a new terrain dominated by rocky crags and looming limestone cliffs. Seven miles of twisting, turning asphalt later we finally arrived in Bulgaria’s smallest town.

Melnik lies just 20 miles from the Greek border, a sparsely populated area full of bright sunshine and rich, humid air. Thracians were the first to settle in the region, followed by Romans and then Slavs. It was the Slavs who gave the town its present name, from the ancient Slavonic word mel, which means chalk or white clay.

At one point Melnik was a bustling trade center with a population over 20,000, but a series of economic crises followed by the turbulent Balkan War of 1913 drastically reduced that number, and today there are just under 400 full-time residents.

Melnik is a destination for those wanting to get away from crowds, traffic and buildings taller than two stories. Its lone street is a 450-yard stretch of cobblestones shaped like a lazy S, surrounded on both sides by bright white one- and two-story buildings with red clay tile roofs.

Many of these establishments are either wine shops or restaurants, with large signs and samples of their goods displayed on the sidewalk.  Prices are typical of Bulgaria, with a double room in a hotel averaging US $40 and a fancy dinner for two costing no more than US $15.

The town rests in a bowl surrounded on all sides by pale cliffs and odd-shaped sandstone cones, the so-called “Melnik Pyramids,” which are considered one of the most impressive natural phenomena in the country.

The surrounding hills are a hiker’s paradise and ancient monasteries and other historical treasures lie nestled among the trees, just waiting to be discovered.

While the scenery may be breathtaking, it’s wine that draws thirsty visitors to this tiny town. The region now known as Bulgaria has been active in wine production for nearly 8,000 years – Homer mentions wines from the area in bothThe Iliad and The Odyssey – and Melnik itself has been a major production center since 1346.

While most Americans are unfamiliar with these vintages, Bulgarian wine has been widely exported to countries such as Germany, Denmark and the United Kingdom for decades.

In fact, up until 1990 Bulgaria was one of the largest exporters of bottled wines in the world, second only to France, with wines from Melnik reigning supreme among connoisseurs. Winston Churchill  declared Melnik wines to be his personal favorite, ordering them by the barrel to ensure that he always had plenty on hand.

Seventy-five percent of the grapes grown in the region are the native Broad-leaved Vine of Melnikvariety, sometimes shortened to just Melnik. The lands surrounding the town are the only place in the world this variety is grown; attempts to transplant the grape to other countries have continually failed.

The wine it produces is dense and bold, the perfect accompaniment to Bulgaria’s spicy meat dishes and hearty salads.

Less wine is being exported from the region these days, but that simply gives wine lovers an excuse to journey to Melnik and enjoy its fine wines in their native surroundings. Most of the wineries offer tasting rooms, some of them located in the same caves where the wine is stored.

This is the type of experience my wife and I enjoyed, paying only 25 cents per glass for wine straight out of the barrel. When we tell our waiter that we want to buy three bottles to take with us, they are bottled, corked and labeled right before our eyes.

On our last night in town, my wife and I throw open the shutters of our hotel window to reveal stark white cliffs bathed in moonlight, looming like tall ghosts above the red tile roofs of the town. The evening is comfortably warm, and we decide to take a pre-dinner stroll to boost our appetites.

Choosing a restaurant is difficult, but we finally stop at a small tavern with outdoor tables set up on a terrace overlooking a courtyard.

Dinner consists of salad, stuffed grape leaves and chuski byurek, long red peppers filled with cheese and eggs, rolled in breadcrumbs then fried to a golden brown.  We wash everything down with local wine served in a clay pitcher, as cool as if it had just been delivered from one of the nearby hillside caves.

Thoughts of traveling back to civilization can wait until morning. This particular evening is reserved exclusively for fresh air, a full moon and wine steeped in thousands of years of history.

At the Killing Fields: Revisiting Cambodia’s Past
Next Post: Through an Artist’s Eyes: St. John’s Elaine Estern