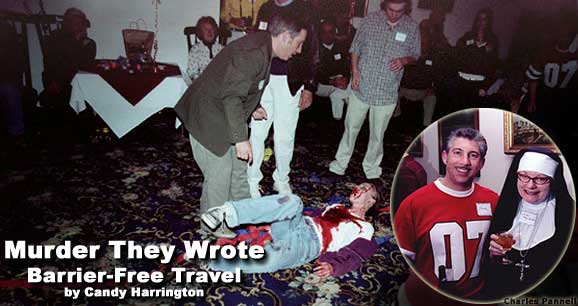 I had a few problems easing into my first murder-mystery weekend. To be honest, I wasn’t quite sure what to expect. There I sat in the parlor of the City Hotel in Columbia, California, trying to make small talk with a woman I had just met.I was expecting some instructions or guidance, but that’s not the way a murder-mystery weekend works. In a sense, all of the guests are part of the show. Throughout the weekend the plot slowly unravels as participants use their best detective skills to try to discover who is a guest, who is just playing a role and, of course, whodunnit.

All murder-mystery weekends have some type of a general plot and, of course, at least one “dead body.” At the onset we were told that we were all gathered at the City Hotel to welcome home “Toni,” the local gal who made it big on the Broadway stage.

Beyond that we were pretty much left to our own devices to figure out the rest. In the end, I just tried to go with the flow.

“So how do you know Toni?” the woman on my right asked. Caught off guard, I wasn’t sure how to reply. I decided to go with an old standard. “She’s an old high-school friend,” I stammered. “Really?” replied the woman. Perhaps you’d like to browse through Toni’s scrapbook.

Despite my clumsy beginning, my detective skills improved as the evening progressed. Soon Toni’s “father” addressed the crowd and thanked us for coming out to welcome home his daughter. Then we all got into the spirit of things, had a few drinks and decorated the room with balloons and streamers in anticipation of Toni’s arrival.

“Shhh,” someone cried out “She’s coming now.” The lights were dimmed and we heard footsteps on the stairs. Very clumsy footsteps, I might add. Then a woman stumbled down the stairs, clutched her chest and “died” right in the middle of the parlor.

Stage blood oozed from her mouth as she lay twitching on the carpet for several minutes before she officially expired. At last, we had our body! And we would spend the rest of the weekend trying to unmask her killer.

Truth be told, we had an interesting cast of suspects from whom to choose, from a whiskey-guzzling nun to three high-school football buddies (Hank, Tank and Frank) who apparently shared one brain.

Our assignment was simple; we were to comb the town, solicit clues from shopkeepers, build alliances, share information and in the end, solve the mystery.

Best of all, the whole weekend was wheelchair-accessible. In fact, according to City Hotel Manager Tom Bender, “If a wheelchair-user signs up, we make sure all of the murder-mystery activities are held in accessible locations.”

Columbia provides an excellent backdrop for this popular event. Located just two hours northeast of San Francisco, in the heart of California gold country, Columbia was originally founded in 1850 as a tent town to house several thousand miners.

Today docents dress in period costumes and give visitors a flavor of gold rush life. A stagecoach roars through town on a regular basis and children play with their hoops and sticks in front of a blacksmith shop.

Access is varied throughout Columbia, and in many cases it is hidden in order to preserve the historic nature of the town. Some businesses have level access, some have hidden ramps, some have small thresholds and some have steps.

On the plus side, vehicle traffic is prohibited in town, so it’s perfectly safe to walk or roll in the streets. Boardwalk sidewalks line the streets, and although curb-cuts are not the norm, there are some access points. Most parts of town are at least partially accessible.

Although lodging in Columbia is extremely limited, the historic Fallon House has one wheelchair-accessible guest room. Room 14, on the ground floor, features wide doorways and good pathway access, and it is the only guest room with a full bathroom.

Access features in the bathroom include a roll-in shower with a fold-down shower bench and a hand-held shower head, grab bars in the shower and around the toilet, and a roll-under sink. It’s simple, but nicely done access-wise.

Columbia murder-mystery weekends are presented four times a year, in January and February. They are priced at US$ 385–US$ 505 (depending on the room) per couple and include two nights lodging, a Friday night reception, three meals on Saturday, brunch on Sunday, entertainment, taxes and gratuities.

It’s a great deal and lots of fun.

Darjeeling: India’s Treasure of the Hills
Next Post: The Thrill of the Chill: Ice Hotel Québec-Canada