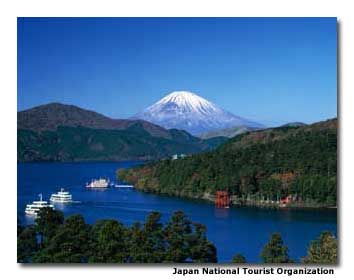 If there is ever an example of Japanese patience, persistence and dogged behavior to make something difficult, it is the annual pilgrimage to climb Mt. Fuji. Every year, from the beginning of July to the end of August, Japanese and foreign visitors alike attempt the climb to the summit of Mt. Fuji, at 12,460 feet (3776 m).

It appears to be the ambition of most Japanese to try the climb at least once in their lifetime— some brave souls even manage the adventure several times. As a temporary resident, I felt compelled to at least try this most symbolic of all Japanese challenges.

I always wondered why my enthusiastic talk of climbing Mt. Fuji was met with unenthusiastic responses from my Japanese friends. For me it seemed like the quintessential experience to finish my 12-month residency in Japan.

My friend Yoshie begrudgingly agreed to join my planned expedition after admitting that, as a lifetime resident, it was a feat she had yet to accomplish. But her feelings towards the event were reflected in her encouragement to my other friends to join the climb. If she had to suffer through it, so should they!

Having journeyed by tour bus for five hours from Tokyo, with just a brief rest stop for a mid-morning, curry-stuffed pocket, we arrived at the “5th Station.”

This is a collection of chalets, restaurants and stores where day trippers to Mt. Fuji can travel to, easily and proudly, announcing they have been on the mountain. The 5th station is at 5,860 feet (1,776 m) and just short of the halfway mark to the summit.

For the brave and the foolish, this serves as the rally point to commence the climb to the summit. The more sedate and wise in character can purchase proof that they have at least “been” on Mt. Fuji, by selecting from the extraordinary array of souvenirs on offer. From the Mt. Fuji-shaped cookies, biscuits and even pies that proclaim “I reached the 5th Station,” the Japanese tradition of buying souvenir gifts for friends and family is easily satisfied.

The visitors who adopt this civilized approach to experiencing Mt. Fuji, can look on with smug amusement at the dozens of tour groups of climbers, as they get their last minute instructions and go through their warm up exercises, before purchasing their official Mt. Fuji trekking pole from one of the 5th station souvenir stores.

In truth, this “trekking pole” is no more sophisticated than a roughly cut walking stick. The poles add to the color of the parade up the mountainside as they are adorned with a choice of Japanese or American flags. Alas, any other nationality must apply a Kennedy-esque approach and declare themselves either Japanese or American for the duration of the climb if they want to “fly the flag.” However the poles prove more than just decorative, providing much needed leverage and leg support as the climbers make the long steady ascent up the mountain.

With my flagless wooden trekking pole in hand, adorned with the complementary tinkling bells, a day pack full of bottled water, “Pocari Sweat” (a Japanese brand of a sports drink that looks like its name but tasted pretty good), snacks and spare clothes, I fell into line, school-group style, to begin the adventure.

The first stage was a pleasant hike along wooded, tree-lined trails before hitting the exposed mountain face and beginning our descent via a series of never ending switchbacks. Our group was a Japanese tour group of 25 climbers ranging in age from late teens to early 60s.

We included a clique of 20-something girlfriends enjoying a weekend adventure, various families, some energetic seniors, with a scientist from the U.S., and one jet-lagged Aussie (me) thrown in for good measure.

Our guides were three safety conscious mother hens, who covered our front and rear as we hiked in formation. The regularity of their roll calls at each rest break took on a singsong nature, as our presence was confirmed with our names called with the -san ending, and answered with the obligatory “Hi” (Yes). To the call of “Miles-san,” I answered in Japanese over and over again during our long, long climb.

The schedule for the climb is centered on the desire to reach the summit to enjoy the sunrise. It sounds good in theory, yet it requires a rather unusual itinerary to support this aim; which requires starting the climb the day before at midday, stopping for a rest and a sleep in the late afternoon, and then climbing again from midnight until sunrise, descending back to the 5th station by late morning.

Day one of our hike was a pleasant Saturday afternoon ascent. Our group was in good spirits as we headed off just after midday. At 4:30 p.m., just as we were getting into the rhythm and pace of our steady climb, we reached our cabin for the night at the 7th station. At an altitude of 2,776 meters (9,160 meters) I had imagined a small rustic structure, lined with cozy bunks, perhaps in line with the type of dormitory accommodation we enjoyed on school camping trips.

But as I waited with my group at the entrance to file in, the comedy of the sheer number of climbers entering before me made me realize that I would be sharing this accommodation with not just several dozen people, but several hundred!

Our bunks were four shelves that lined our corridor length room. Turning over or sleeping on my side would be fraught with danger. Sleeping Japanese-style on your back, with a hard neck pillow for support seemed to be the only way to save any embarrassing snuggle with a fellow climber.

After an efficiently served but still rather tasty meal of curry and rice, we retired at 6 p.m. to our shelf-bunks for some sleep. Given the limited space of our sleeping space and the early time of our bedtime, sleep was neither restful nor forthcoming.

As I listened to the nasal gurgles of one of my nearby bunk buddies, I contemplated phase two of our adventure—a midnight wakeup call followed by a 3,100 foot (1,000 m) ascent in pitch-black, which was estimated to take three hours, allowing plenty of time to take in sunrise from the summit.

As I stumbled out of the cabin, pulling on my hiking boots as I went, I was stunned to see the number of people milling around preparing for the nighttime climb. Besides our own large cabin complex, the mountainside was dotted with dozens of similar sized and styled accommodations, from which literally hundreds of hikers had now emerged.

The switchback trails now took on a fairyland appearance as the zigzag pattern of the path was outlined with the lamps and flashlights of the eager climbers. I worried that my lack of training and hectic travel schedule prior to the climb would hamper my ability to make the summit.

However, the crowded trail ensured a pace that including more waiting than walking. For every two steps we took, we were rewarded with a two minutes rest, such was the density and number of climbers on the trail.

The altitude rather than the exercise seemed to be my undoing. Feeling dizzy and lightheaded less than 15 minutes into my midnight hike, I was left struggling for breath on the side of the trail. But thanks to the inventiveness and thoughtfulness of the Japanese, help was conveniently at hand from one of the many convenience stalls in the form of an aerosol can of oxygen. This clever little device was no larger than a can of hairspray and came with its own built-in oxygen mask. Once I worked out how to get a spray of oxygen and had taken a few gulps of water, I was a mere 2,000 Yen (US$ 18) lighter but ready to push on.

In the dead of night, my hardy group slowly inched our way in the cold, windy darkness towards the summit. There was little at this altitude to distract us by way of scenery, as it was summer. There was no snow on the mountain and the mountainside was carpeted with gray gravel-textured rock, with the odd substantial boulder to add a stretch and scramble to our climbing style. There was not a bush, or shrub or tree in sight.

While I took on a blinkered approach, focusing on one step at a time, my friend, Sally, had the energy and determination to build on her collection of Mt. Fuji stamps. Each station on the climb can be marked by a burnt seal into your wooden walking stick, and she happily marked each station. I can imagine Sally pulling her much-adorned walking stick from a cupboard in decades to come to prove to her grandchildren what their adventurous grandma did in her youth. I am also guessing the phrase “that crazy Aussie Susan made me do it” will feature in the story!

What should have taken three hours, in the end took more than five before we finally stumbled over the last rocky, steep incline to reach the summit. The sunrise came not with a glorious blaze of color, but with a gradual change in the sky from milky gray to milkier gray.

The summit, like the various station points along the ascent, was packed with huts and mingling crowds of climbers. We stayed long enough to enjoy some longed for respite from the cold in one of the huts, enjoying a cup of hot chocolate and leaving a phone message for the folks back home before beginning the four hour heart-pumping descent back to the 5th station.

In total, my Mt. Fuji adventure took some 22 hours, During 16 of these hours, I was exposed to the elements. The other five hours were spent in near total darkness as I hiked, waited and hiked some more to the summit, a total climb of 6,200 feet (2,000 m).

I was told that climbing Mt. Fuji has a deep, spiritual impact on those who attempt the adventure. I assumed this was in the sense of accomplishment and the sunrise reward at the summit. However in the cold, dark, silent and numerous pauses during our odyssey, there was little more to do than just think. Still, that’s not a bad reward in itself.

Christmas Traditions: The Best Christmas Markets in Germany
Next Post: Where is the Best Place to See the Northern Lights?