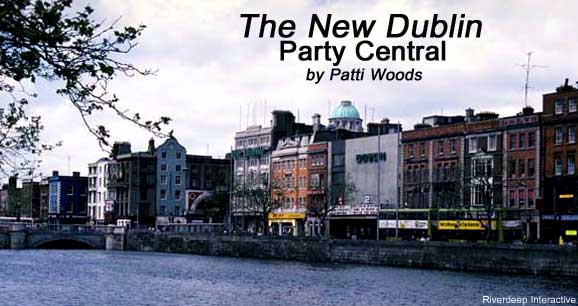 Forget Las Vegas. Don’t even think about Rio. The new party town is the capital and largest city of Ireland — Dublin. Just as it doesn’t need to be Mardi Gras to celebrate in New Orleans, it doesn’t take St. Patrick’s Day to get the pubs full and rocking in Dublin. But before you start conjuring up images of gray-haired men in tweed saddling up to the bar to drown their sorrows in a pint, guess again. Though rich in history, Dublin is quickly becoming a young city, thanks in part to its booming economy.

While agriculture was once the country’s predominant industry, things have changed dramatically in the last decade. Today, Ireland is the world’s second-largest software producer. Yes, Ireland; Yes, software. With companies like Microsoft, Intel, Dell, Hewlett-Packard and Gateway setting up shop throughout the Emerald Isle, young professionals from across the EU are flocking there for jobs. In fact, 50 percent of the population of Ireland (5.5 million) today is under the age of 25 — which means the streets of Dublin come alive every evening when the city’s 1,000 pubs are flooded with partiers.

The drink of choice is beer, mostly Guinness, and the trend among women is to order a Guinness with a splash of black currant juice. Mixed drinks are available, but this isn’t the place for flaunting your martini. Beer is definitely where it’s at, whether in a pint, a half-pint or a glass.

Law of the Land

First-time visitors to Dublin may be surprised by some of the pub laws, particularly the fact that last call is 11:30 p.m. Monday through Wednesday, 12:30 a.m. Thursday through Saturday, and 11 p.m. on Sunday. For a city with so many pubs and such an imbibing reputation, that seems somewhat incongruous. But never fear; for those in the know, certain clubs have special “after hours” licenses where you can continue the conversations you started.

Another law that may come as a surprise is the smoking ban, which was instituted in March 2004. All enclosed workplaces in Ireland — pubs included — are now smoke-free. In order to deal with this rule, some pubs have covered and heated “beer gardens” where the smoking population can congregate.

The character Leopold Bloom from James Joyce’s Ulysses, pretty much summed it up: “A good puzzle,” he said, “would be to cross Dublin without passing a pub.”

That’s no hyperbole. Whether you’re looking for a small, dark, hole-in-the-wall with a chap crooning about cockles and mussels or a three-floor über-club filled with egos and attitudes, Dublin has it all. You really can’t go more than two blocks without finding some sort of watering hole. It’s fun to randomly see what you find — or check out these notables:

While there is an actual pub named Temple Bar, the real thing is actually an historic area in the heart of Dublin city. The Temple Bar district is a maze of cobblestone streets touted by Temple Bar Cultural Trust as Dublin’s “cultural quarter” — and rightfully so, with its frequent outdoor concerts, festivals and events. Once the sun goes down, this area of town bustles with the electricity of loud music and young singles as they go from pub to pub in search of new friends and fun.

For a more traditional experience, visit Johnnie Fox’s Pub (www.johnniefoxs.com), known as the “highest pub in Ireland.” About a 20-minute drive from the center of Dublin, the pub is located in Glencullen, in the Dublin Mountains, the northern end of the Wicklow mountain range. (Lugnaquilla is its highest peak, at 3,039 feet (926 m). Here they offer “hooley nights,” evenings of traditional Irish music and dancing, and a four-course dinner with plenty of options, including fresh seafood. Touristy? Yes. Fun? Definitely.

Step back into 19th century Paris when you enter this enormous pub (www.dublinafterfive.com/daf.asp?PID=5) on Dawson Street, located in the heart of the city just off Grafton Street, the main shopping thoroughfare. With its Art Deco interior and glass atrium, you’ll feel like you’re in a scene from Moulin Rouge. This is definitely the place to be, as evidenced by the body-to-body crowds that congregate on Saturday nights. And beer is still the drink of choice, despite the feeling that you should be ordering an absinthe.

Let’s face it: no trip to Dublin would be complete without a visit to the Guinness Storehouse (www.guinness-storehouse.com). This is where you can learn all about Dublin’s most famous beer and the family that started it all. The popular legend is true: Arthur Guinness did sign a 9,000-year lease for the property in 1759, for the sum of £45 a year. Visitors can see the original contract sealed in the floor of the entranceway to the Storehouse.

With admission to the Storehouse, each person over 18 gets a clear Lucite trinket that contains a single drop of Guinness with a plastic ring attached. The ring can be traded at the end of the tour for a free glass of “the nectar.”

Throughout the building, visitors can view exhibits of the brewing process and even learn about how to drink in a socially responsible manner. The core of the building was designed to look like a giant pint glass, stretching from the ground floor up seven flights to Gravity, a bar offering a 360-degree view of the entire city.

Guinness’s Brewmaster Fergal Murray, whose job it is to teach the barkeeps throughout Ireland how to correctly pour Guinness, has taught the barkeeps at Gravity his six steps to pouring the perfect pint: They start with a dry, clean glass, hold it at a 45-degree angle, let the tap do the work and don’t let it touch the glass, allow the stout to settle, and then top it off with a dome and a foamy shamrock. The perfect Guinness or — as the Irish call it — blonde in a black skirt.