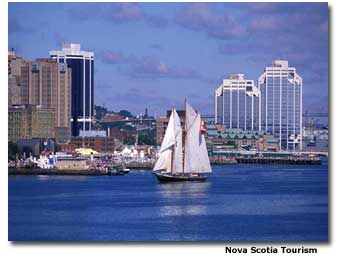 The Titanic and Halifax

In the early hours of April 15, 1912, the largest ocean liner in the world, the unsinkable R.M.S. Titanic, began to sink after hitting an iceberg in the North Atlantic Ocean on her maiden voyage. Within hours, one of the worse maritime disasters the world would ever know had unfolded. Hundreds of lives were lost in the chilly waters.

The town of Halifax, in Canada’s Nova Scotia province and on its Atlantic coast, was the nearest large seaport. Halifax ships set sail as soon as they heard of the disaster. These seamen faced the grim task of retrieving the dead and salvaging what they could.

Maritime Museum of the Atlantic

The remains of 200 of those poor souls were recovered and now rest in cemeteries around Halifax. Artifacts of the doomed liner are also on display in the Maritime Museum of the Atlantic on Halifax’s seafront.

Halifax, nicknamed the “Warden of the North,” is a city with a rich and colorful history. The city was founded in 1749 by the British, who saw the strategic importance of the natural harbor, one of the largest in the world. For more than 250 years, Halifax has been one of the most important seaports in the world. In both the First and Second World Wars it was the main staging area for the convoys that carried men and munitions to the conflict in Europe. It also served as the gateway for millions of European immigrants to Canada in the 19th and early 20th centuries.

In that time, it has seen its share of tragedy and sorrow, including the aftermath of the loss of the Titanic.

Disaster has also struck Halifax itself. On December 6, 1917, a munitions ship bound for Europe exploded in the harbor.

The blast was the largest man-made explosion known to history. It would only be surpassed by the atomic bombs used almost 30 years later. More than 1,500 people were killed immediately and thousands more injured and left homeless, as almost a quarter of the city was destroyed in the blast and fires that followed. Halifax persevered, however, and rebuilt itself literally from the ashes.

Perhaps because of its past, there is a perception of Haligonians as a staid and reserved people. What one would expect, considering their very British heritage? Nothing, however, could be farther from the truth. Haligonians may work hard, but when the day is done, they also like to play hard. Halifax is certainly the place to party. With its hundreds of restaurants, taverns, pubs and clubs, Halifax has one of the most vibrant live music scenes in North America.

The town has a great deal to offer visitors, and each year, thousands take advantage of its offerings. There are arts, entertainment, fine dining and excellent local music. A rich sense of history has been carefully preserved in the dozens of museums and restored and preserved buildings and structures that stand side by side with their modern counterparts. Nature lovers will be drawn to the dramatic natural scenery that is just a short distance from the heart of the city.