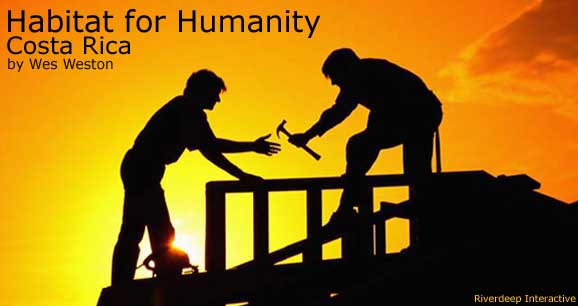 The sun beat down with such intensity I was breaking out in a sweat just sitting in the shade. I didn’t mind the heat so much, I was just glad to be outside. However, it did impede the speed of our progress at the construction sight. It was grinding work, between digging, mixing concrete, laying blocks and bending rebar, all of which I personally had little to no practical experience in. I’ll admit that building houses was not in my job description.

I sat with my back against a tree and poured a half-bottle of cool water over my head. I broke into a smile not because I felt more refreshed, but because I was truly happy. To much welcome, a gentle breeze suddenly swept across the landscape and took my thoughts with it. My mind began to wander. How did I get here … ?

For several years I had the dream of living abroad, learning a different language and culture. Wasn’t there something more to life than routine and monotony?

At times I would often wonder if most people were really waking up in the morning inspired by the work they were doing and how they were living their lives. I needed to make a change. I wanted to become actively involved in something positive that would provide me with a sense of purpose.

I finally took the initiative when I traveled to Costa Rica on a whim, and found myself volunteering with Habitat for Humanity International. Can one person really change the world? I wanted to find out.

Habitat for Humanity International is a nonprofit, ecumenical Christian organization dedicated to eliminating substandard housing and homelessness worldwide, and making adequate, affordable shelter a matter of conscience and action. It was January 2005, and Habitat had started a new International Volunteer Program (IVP) for long-term volunteers.

I was the first to go through the program. My official title was the Volunteer Coordinator for Latin America & the Caribbean. I felt this to be a tremendous opportunity, as the organization was built and exists on the support of volunteers.

Starting out I was a bit on edge, but in due time I found my groove within the Habitat framework. It was unbelievable — I was actually enjoying office work. I took part in the development of materials such as a volunteer manual, interview guides and evaluation forms, and worked with a task force for the continuous improvement of the IVP program. I even did an on-site volunteer training in El Salvador.

Yet the greatest part about my job was getting to work alongside other volunteers such as me. People who were there not because they had to be or were paid to be, but were there simply because they wanted to be. As far as the volunteers were concerned, my role was to coordinate housing and arrival logistics, conduct orientations and support them throughout their stay.

There was such camaraderie among the volunteers I would often take it a step further, and plan weekend excursions. Working with Habitat gave me the confidence to feel I could accomplish any task, but more importantly, it gave me a genuine sense of fulfillment in being able to work hard at work worth doing.

As often as possible I would try to take a break from the office and take the volunteers on build trips to Habitat construction sights throughout Costa Rica. It was extremely heartwarming to be able to see firsthand the culmination of the work you’re doing. Out at the site we would get to work alongside the benefiting Habitat family, who was always very receptive, helpful and appreciative of us being there. 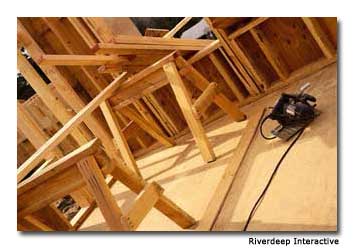 The scene was a fantastic amalgamation of cultures, economic backgrounds and beliefs. Yet the common bond that tied us together so tightly was the simple notion of building a home.

Esparza is a small town alongside the Pan-American Highway in Costa Rica, whose city limits you would pass in just a few short breaths if you were riding on a bus. I arrived in Esparza on a Sunday, along with 10 volunteers from the Northern Ireland Memorial Fund. I was to act as the liaison for this group over the course of 10 days, during which time we would begin construction on a Habitat home.

The home was going to a single mother, Maria, who would be living with her two sons and two daughters. Up until that time the family had been sharing a rented house in town with extended relatives. They were a family of 10 living under one roof.

As I stepped foot in the doorway of the home Maria shared with her relatives, I could practically see the entire residence from my vantage point in the doorway. It was hard for me to comprehend this huge family sharing this 3 bedroom/1 bathroom home. Surely, the Habitat home would offer the entire family a reprieve from their current living situation.

When we arrived at the worksite the first day, we found a foreman and Maria’s 2 sons, Marlon and Dede. Every benefiting family that partners with Habitat commits to putting in roughly 400 hours of “sweat equity” on their home or on other Habitat projects. At first the two boys, ages 19 and 22, were shy and introverted, but throughout the week our group got to know them, laughing and sharing stories with no more than gestures and friendly smiles.

Several times during the week Maria and her daughters walked over to the build site to bring us fruit and juice. What started out as an empty lot turned into a home that was almost ready to be roofed by the week’s end.

Even though there were obstacles of language and culture, each one of us made a connection with the family. When dealing with life-changing events, it seems evident people form a bond that is stronger than most. For that family in Esparza, the building of that home was certainly going to change their lives.

Just seeing everyone working, laughing, smiling and sharing created an atmosphere so rich with emotion it made me reconsider how I defined wealth. The house was symbolic of much more than just a place of residence. It represented a unity, a coming together and an inherent understanding of equality that we’ll carry with us for the rest of our lives. As cliché as it may sound it’s true. We were not just building homes, we were building lives.

Internationally or domestically, conflict resolution or human rights, poverty or the environment — it’s disheartening to think that there are so many competing needs. However, it doesn’t matter where you begin to start making positive contributions, just so long as you make the decision to start, which is ultimately the toughest decision you’ll have to make.

I chose the movement of eliminating poverty housing. Did I eliminate poverty housing? Not even close. Did I succeed? Absolutely. The serenity of my experience taught me that I alone cannot do away with poverty housing, which led me to the answer I was looking for.

Perhaps one person can’t change the world, but the world can certainly change for one person. And it’s this domino effect, that if spread across the globe we can, collectively, achieve the unimaginable and create a world that reflects the warmth of mankind, instead of its indifference.