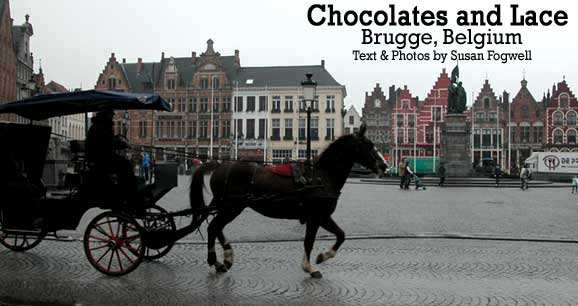 Combining Amsterdam with Brugge would double our fun, my husband, John, and I surmised, as we hopped onto a train at Amsterdam’s Centraal Station. Two hours later we changed trains in Antwerp and were slicing through flat Belgian farmland. Light snow covered the landscape, which was dotted with grazing horses. As we got closer to our destination, villages of gabled buildings with narrow cobbled streets passed by our window.

It wasn’t long before the train stopped in Brugge, one of the best-preserved medieval towns in Europe. The city is the capital of the West Flanders Province, and in 2000 Brugge was added to the long list of UNESCO World Heritage sites.

Belgium is world famous for its decadent, rich chocolate and fine handmade lace. During our five-minute taxi ride into the city, I fell in love with Brugges. Everywhere I looked, colorful buildings were replete with heavenly chocolate shops, inviting restaurants and toasty teashops with fireplaces glowing inside the windows.

The taxi pulled up in front of the Hotel Heritage, a small, elegant hotel that was once a Georgian mansion. Only steps away from Market Square, the hotel features classically appointed French décor with antique-style furnishings.

To take the chill off, tea is served in the sitting room, off the lobby, in front of a crackling fire. In our room, two sets of French doors were swathed from floor to (high) ceiling in golden-yellow fabric. Terry robes were provided, and the room even had a computer for our use.

The best way to absorb Brugge is by getting lost on the cobblestone back streets, I figured. Grabbing two umbrellas on our way out the door, we set out to explore the gothic town that grew wealthy on the fabric trade in the 11th century.

At one time, Brugge was a focus for international trade. High-quality English wool was turned into garments and exported all over the known world. By the 14th century, the population had grown to the size of London; with a population of 35,000, it was one of the biggest cities in the world.

In the 15th century, Brugge was the favored residence of the Dukes of Burgundy, while England and France trudged through the 100 Years War. It was also home to artists Jan van Eyck and Hans Memling. By the 16th century, Brugge’s Golden Age abruptly ended. The economy had collapsed and the Burgundian court left town. Occupied by the Germans in Word War I and II, the city remained below the radar of tourism until the 1960s. Today, it prospers on tourism.

Market Square is home to one of the city’s most distinctive medieval landmarks, the Belfry Tower, a former city treasury. This 289-foot (88 m) bell tower has stood over the square since 1240. A 366-step climb to the top offers a view of the town’s storybook rooftops and outskirts. On a clear day, the coastal towns along the North Sea can be seen in the distance.

A revolving line of horses and buggies in the center of the square whisks visitors off through the cobblestone streets of Brugge for historic city tours. The carriages pause mid-tour at the peaceful Begijnhof, a group of houses and a museum surrounding a garden where, beginning in the 13th century, women chose to spend their lives under vows of obedience and chastity, but not poverty.

Two of the most-visited sites in Brugge are the Groeninge Museum, which has one of the best collections of Flemish art in the world, and the Memling Museum, housed in the chapel of St. John’s Hospital, one of the oldest preserved hospital buildings in Europe. Visitors can tour the wards and pharmacy of this 13th century hospital and see furniture and surgical instruments of this time. The chapel displays paintings from the collection of German-born artist Hans Memling.

Brugge is undoubtedly one of the best places to explore the making of chocolates. Belgians have been making chocolate confections for centuries. Although the Spanish brought the bitter cocoa drink to the continent from South America, the Belgians added sugar, vanilla and cream, creating a chocolate craze.

While strolling around Brugge, we scanned chocolate shop windows. We wound up on Steenstrat, the main shopping street. An open door and a creatively decorated window caught my eye, so I stepped into Verheeke. An impressive selection of chocolates, pralines and marzipan displayed in a large glass case was tempting, and in the back of the shop were lovely packaged gifts of chocolates and decorative tins.

I walked out with an assortment of chocolates filled with Grand Marnier, rum and strawberry and raspberry creams. I couldn’t resist buying assorted marzipan creations, either. There must have been more than a hundred other flavors.

During medieval times, people drank beer instead of water, as water sources were often contaminated. Belgium is well known for its beer making, dating back to the Middle Ages. From potent to cherry-flavored, the country boasts more than 600 types. The family-owned De Halve Maan Brewery is among places to sample the local beer.

Onze Lieve Vrouwekerk (Our Lady’s Church), topped with a 396-foot-tall (119 m) tower — the second-highest church tower in Belgium — is a memorial to the power and wealth of Brugge in its heyday. The church’s highlight is a small statue of the Madonna and Child, by Michelangelo. Soon after the Madonna and Child was finished in 1505, a wealthy Flemish merchant bought the close–to–life-size statue and had it shipped to Flanders.

We then continued down Steenstraat to Simon Stevinplein square, home to the shop Lace Paradise. On the back wall was an exceptional large tapestry depicting King Arthur’s court. Smaller, machine-made versions were approximately USD $275. The sales clerk told us that the handmade tapestry I had been admiring on the wall was priced at more than USD $12,000.

At dinner time, we made our way to De Koetse restaurant on Oude Burg, a back street off Market Square, where we were seated in a snug room with a view of the narrow street. We both ordered a bowl of tomato soup, which came with fresh, homemade whole-wheat bread. The extensive menu had mussels served three different ways: plain, in marinara sauce or in a cream sauce. A heaping serving of muscles arrived in a blue bucket. My husband’s grilled steak looked as good as a steak in Buenos Aires, just a smidge smaller.

While we visited during winter, springtime, when daffodils and tulips are in abundance, bursting with vivid colors, is a popular time for many visitors.

To see the city from a different angle, visitors can take a boat ride through the peaceful canals, or bike to the town of Damme, four miles (7km) northeast of Brugge, near the River Zwin.