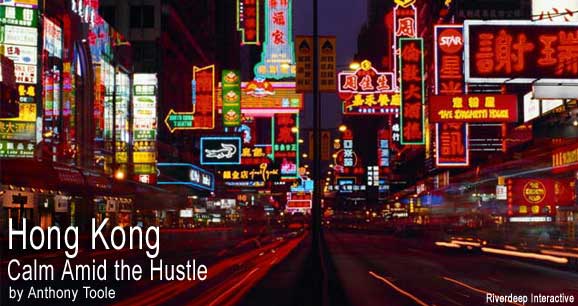 As we approached touchdown, the heat haze thickened to a brown pall hanging over the city. The shuttle train to Central Station was clean, fast, smooth and quiet. It carried us across reclaimed land, past tree- and shrub-covered hills and suburbs of tall concrete. Thus, in half an hour, Hong Kong established itself as a city of glaring incongruities.

The name means “Fragrant Harbour,” and probably derives from the scents of trees and flowers that once adorned the hills and shores. The flowers are probably still there on the hills, but their scents are now swamped by the fumes of traffic, the seductive smells of cooking and the somewhat repellent odors of live poultry and raw meats in the open markets, all compounded beneath the umbrella of commerce in this most densely populated city on the planet. The incessant noise even penetrated the double windows of our 18th-floor hotel room.

Our window looked out over the marina of the Royal Hong Kong Yacht Club and across the water to Kowloon. Though the water was about 160 feet (50 m) away, we found it impossible to reach. This part of the city made few concessions to the pedestrian. Only in streets too narrow for a car to pass could we walk in some comfort.

Hong Kong is a congested maze of high-rise canyons. Shiny, glass-walled banks and multi-story hotels mingle promiscuously with concrete residential blocks, from which the paint and stucco peels and drying clothes hang from balconies. Bamboo scaffolding clings to walls. Narrow passageways are closed into tunnels by jutting air-conditioning units.

Trees along the streets, overhung by shop signs and balconies, seem to survive against the odds. Direct sunlight never reaches the bottoms of these canyons, which are illuminated only by diffuse scatterings of reflected light. And the traffic is intense. Cars, buses and taxis jostle for position on the streets.

Pavements are packed with people in a hurry. And amid it all, the occasional old lady or gentleman in peasant garb shambles past, pushing a loaded wheelbarrow along the roadside, oblivious of the traffic, and looking ancient enough to say, “This is my home, and I was here long before you.”

We took a tram to the ferry terminal. The tram was as congested as the city. Passengers entered at the rear and slowly drifted toward the front, dropping the standard HK $2 fare into a receptacle beside the driver, before exiting. If one accepts the crush, then this is a quick, efficient and very cheap way to travel between Causeway Bay and Hong Kong Central.

In the Central district, hundreds of girls and young women, migrant workers from Indonesia or the Philippines, sat in doorways, thoroughfares, subways, along sidewalks and across roads that were closed to traffic. Many sat on newspapers or blankets.

A large number were eating. Some were dancing. All were chatting incessantly. Most were employed in restaurants or hotels, and this was Sunday, their day off, when they were free to meet with friends and catch up on gossip or share news from home.

Kowloon appeared more spacious and airy, quieter and less relentlessly hectic than Hong Kong. A broad pedestrian precinct surrounded the Cultural Centre, Space Museum and Theatre. On the quayside, an impromptu drum ensemble containing co-opted children and visitors entertained the crowds relaxing on the steps of the Hong Kong Museum of Art.

Several wedding couples and their retinues sought the most photogenic backgrounds against which to record their unforgettable day. The Avenue of Stars, which curved out over the water, recognized the achievements of homegrown celebrities, some of whom had made it to Hollywood.

The next day we returned to HK Central and threaded a course back and forth through the street markets that clogged the narrow passageways linking Des Voeux and Queen’s roads. Here, the congestion became claustrophobic, with merchandise hanging from racks that stretched wall to wall. These were streets of the hard sell, where stallholders, to make a sale, argued prices down to the level of the genuine bargain. Silks, in particular, proved well worth buying.

The tram to Victoria Peak climbed the hillside at a ridiculous angle through dense jungle and past residences perched on impossible slopes. The floors are angled to prevent standing passengers from sliding to the rear of the coaches. At the top is a complex of shops and restaurants, and a water sculpture that brought squeals of glee from children.

Back in the city, our bus was held up for about 20 minutes to allow the passage of a march by protesting migrant workers, not something we expected to see, even in this most capitalistic outpost of Communist China.

Hong Kong is an overwhelming city, and a two-day stopover leaves one with little more than an impression of its character. Yet from two viewpoints, the noises, the smells, the congestion, even the ugliness are transcended. Victoria Peak rises above the skyscrapers that crawl up its sides. From the top, the harbor becomes a millpond, and the ferries and boats that ply their trades with Kowloon and China transform into toy ships.

And as the Star Ferry to Kowloon pulls away from the shore, canyons shrink, peeling stucco vanishes, people disappear and buildings merge into a pattern against a backdrop of wooded hills. Hong Kong then becomes … there is no other word for it … beautiful.

Morocco: Deep in the Heart of Kasbah Land
Next Post: The Price of Enlightenment: 12 Days in an Indian Monastery