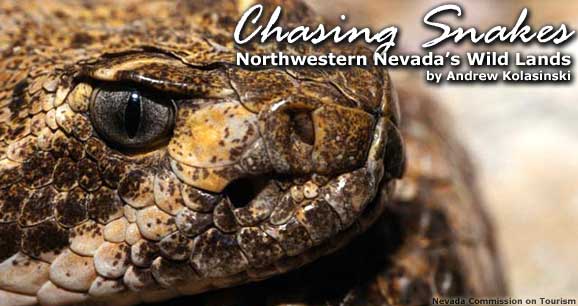 By the time I catch up, Bruce is running back. Where he was standing, a three-foot (.9 m) western rattlesnake is rising up to strike, rattling its tail in warning.

“He doesn’t like you very much. I’ve never seen one get this aggressive,” says Jim, as he strides over to the snake and expertly catches it with a specially designed long-handed gripper.

“I think he just wants a closer look at me,” says Bruce.

After showing us the snake’s beautiful diamond pattern and counting the segments on his rattle, Jim releases the feisty reptile into a clump of sagebrush.

Jim is a herpetologist and biology instructor at Clark College, near Portland, Oregon, and he’s the reason I’m out in this desert chasing, and being chased by snakes. He convinced me this would be fun.

Every June, the two brothers take a trip into Nevada’s backcountry. A part of these trips is dedicated to gathering specimens for Jim’s college laboratory, where he keeps dozens of types of snakes, lizards, turtles and frogs.

This year, he doesn’t need any more specimens. We are just catching them to take a look, make some notes and release them, away from the hazards of the highway. I’m assured I’ll get a look at some truly beautiful reptiles, such as the leopard lizard and the king snake.

It’s not the type of holiday most people think of when they consider Nevada. Las Vegas and Reno are packed with exciting casinos and nightclubs, but for a different side of Nevada, the state’s northwestern corner, with its Thousand Springs Canyon (a mini Grand Canyon), mountains and mesas will take your breath away.

Our base camp for exploring is the Virgin Valley Campground, an oasis in the Sheldon National Wildlife Refuge. The campground is maintained by the Dufurrena Mining Company, which operates within the refuge. The drive in takes you past company offices and equipment yards, and you can camp free for up to 14 nights.

The campground has outhouses, drinking water and a hot springs swimming pool to soothe and refresh travelers. The adjacent rustic shower house and other outbuildings are beautifully constructed of red sandstone, built under President Roosevelt’s Depression-era make-work program.

Before the turn of the 20th century, the valley was a watering hole for cattle and sheep, and some vestiges of ranching still operate on the outskirts. Remains of homesteads and ranch houses are scattered through the preserve.

A series of ponds is home to bass, crappie and other warm-water fish, as well as abundant bird life. The surrounding desert is alive with life.

Most campers come to hike the backcountry or to ride around on horses, dirt bikes, mountain bikes or ATVs. Many are rock hounds.

There are several opal-mining operations in the refuge. Dufurrena Mines extracts tons of precious fire opals from open-pit extractions. For a small fee you can filter the tailings and be almost sure to come out with gems. Opals are also found here in their natural settings, if you know where to look.

Our camp neighbors, Dave and Kathy, show us their jar of opals. They come in their RV every year to gather gemstones. They keep the stones in water to preserve them from drying too fast.

“These opals are about 4 percent water. If they dry out too fast, they’ll crack and discolor. You have to dry them out slowly,” Dave says.

Later, around a sagebrush campfire, it becomes clear our purpose in this desert is a bit unusual.

“Let me get this straight; you guys want to run into rattlesnakes?” our neighbor Dave asks.

The conversation turns from opals to rattlesnakes to Indian arrowheads, which Dave and Kathy keep finding while rock hunting. These artifacts are protected by law, and must be left where they’re found.

For thousands of years the area has been home to Native Americans. The Kidutokado band and the Tsoso’odo tuviwarai still live here. Along Highway 140, on the Oregon side, you can see an ancient site with evidence of occupation going back 13,000 years.

The core of an extinct volcano called Fort Rock looks a bit like Australia’s famous Ayer’s Rock, and was once an island in a glacial-melt lake. Clovis points (spear heads), moccasins and other artifacts have been found at Fort Rock.

Virgin Valley is accessed from Highway 140. The nearest stop for supplies is at Fields, Oregon, about 30 miles north, on highway 205. Lakeview has more services, and is about 70 miles west. At Denio you’ll find a classic cowboy bar with the appropriate name of “Bar.”

Camping at Virgin Valley isn’t the only accommodation option. Winnemucca, Nevada, is a couple hours’ drive away. Here you’ll get a taste of what Las Vegas was like in the early days. There are casinos, but they’re small-scale operations.

The Winners chain has a Winnemucca facility, complete with 24-hour casino, hotel, restaurants and bars.

True to Nevada’s gambling culture, the rooms, meals and drinks are bargains — anything to get you in the door of the casino.

The region is dotted with alkaline lakes, surrounded by bone-white salt flats. These lakes are intermittent bodies of water whose existence year-to-year depends on the winter snowpack in the mountains above.

The edges of these miniature seas are good places to spot dust devils — tornado spirals of sand, salt crystals and debris. Dust devils, moving as if possessing a will of their own, add a touch of mystery to this landscape.

The desert colors dazzle my eyes. Rocky outcrops and layered sediment cliffs in shades of red, orange and pink break the view of snow-capped mountains. Looking at this forbidding wasteland, I recall Mark Twain’s description of Nevada as a land so inhospitable that, “Birds are compelled to carry their own provisions when flying over.”

Back in the wild desert, my friends Bruce and Jim are closing in on another specimen, a four-foot gopher snake sunning itself in the middle of the road. A mimic of the western rattler, the gopher snake has a hiss that sounds just like a rattlesnake, and it behaves with a ferocity you‘d expect from a more dangerous creature.

“He can’t really harm us; his bite isn’t toxic. He just acts tough,” says Jim, as he gently pushes the angry gopher snake off the road, out of harm’s way, and safely back into the desert.

Our reptile search results in sighting six western rattlers, about a dozen gopher snakes, a western fence lizard and half-a-dozen whiptail lizards. Jim says the temperature, about 95 degrees (35˚ C) in the afternoons, has been too cold to bring out more numerous and exotic species, such as the collared, leopard and horned lizards, and the magnificent king snake.

I decide I’ll have to come along on next year’s reptile safari. Hopefully it will be a little warmer.

In Search of the King: Elvis Presley’s Graceland
Next Post: Joie de Vivre in California: A Weekend in La Jolla