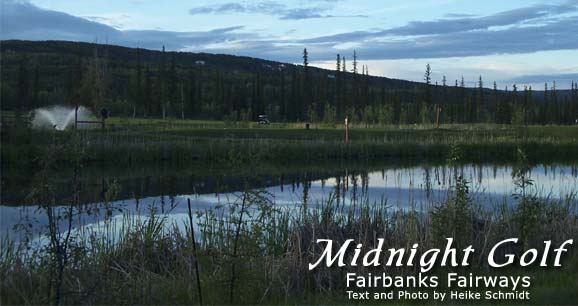 My watch shows 10:48 p.m. — perfect tee time. Long shadows are creeping over the grass. White mist is rising from the ground. The boreal forest beyond the fence stands pitch-black and silent. Untamed taiga woods — habitat for wolves and bears, moose and raven — begin right past the mesh.

All songbirds are long sleeping soundly. But the Fairbanks Golf & Country Club in this central Alaska city awakes to a bustle and hustle right now, in the late evening hours as the midnight sun is glistening in the sky, bright and clear.

Magnificent golfing weather! In the height of summer, the Fairbanks Golf Club is one of the few in the United States to stay open until midnight without artificial lighting. Here, the last tee time for the 9-hole course starts at 11 p.m.

Just a few years ago, the club was even open around the clock. Now, there are only a couple of minutes left to get to the tee-off. So I shoulder my heavy bag and start marching toward the course.

I am not the only one taking advantage of the convenience of a tee-off time that doesn’t conflict with office hours. Tour buses from a cruise line come to a screeching halt in front of the club house. Out climb excited tourists on shore leave.

Golf clubs clatter, electric carts jolt over bumpy pathways. Laughing, chatting and shouts of jubilation echo over the course as one of the happy players manages to drive his ball across the water hazard first and directly into hole number 6.

A grinning Eskimo caricature sporting snow boots with a golf club in his gloved hands is the mascot of the Fairbanks club that appropriately opened its 9-hole course to the public on the summer solstice of June 21, 1946. “Farthest North” is printed in bold letters above the smiling Inuit cartoon character.

And my car GPS unit shows an impressive latitude of 64º 52′ north in the club’s parking lot. This is as far north as Siberia or the southern tip of Greenland.

However, if you unfold a city map of Fairbanks (population about 30,000), you will quickly see that the North Star Golf Club — offering 9- or 18-hole courses — is actually located a finger’s width even farther north (64º 53′) and can rightfully claim to be “America’s northernmost” golf course.

Back at the Fairbanks Golf & Country Club, wild roses grow exuberantly alongside the well-worn fairways. Stray balls are forever lost in a jungle of bushy ferns and dandelions. Narrow gravel paths have in places become slick mud holes where rainwater cannot penetrate the permafrost ground, which partially thaws during the short summer.

Trying to get away from the pesky mosquitoes in a golf cart while splashing through knee-high puddles and slippery silt, preferably without getting stuck, is quite similar to going on a jeep safari. Every zipper is pulled up as high as possible for protection from the blood-thirsty unofficial “Alaskan State Bird,” and my pants are securely tucked into my socks.

When playing this course, you may not be able to see your fellow players against the low-standing, blinding sun. But don’t worry; you will always be able to sniff them out. Insiders are smart enough to use odiferous mosquito repellent extensively here — which locals refer to as “Alaskan cologne.” Be sure to do the same, or you will come home chewed up by the ever-hungry little creatures.

Mosquitoes may not be the only wildlife you are bound to encounter on the course. A moose had been spotted a few days earlier being chased by a black bear straight across the greens. And a curious gray wolf was known to stalk nightly golfers from hole to hole. Small predators such as eagles, hawks and the occasional lynx are often spotted.

The neighboring North Star Golf Club has even introduced an adventurous special rule to deal with visiting fauna: If a raven or red fox steals your golf ball from the playing field, you may introduce a substitute at the scene of the crime without picking up penalty points. There are not too many places in the world where players seriously need to consider live animals, in addition to sand bunkers and water traps, as official hazards.

The midnight sun is a natural phenomenon that only can be observed in the polar regions of the world. Because the earth’s rotational axis is tilted, one of the poles is leaning toward the sun for approximately six months out of the year.

At the North Pole, for example, the sun does not dip below the horizon between March 20 and September 23. The farther away one is from the North Pole, the shorter this phase of permanent daylight.

At the Arctic Circle (latitude 66º 33′ north), the sun does not set for a period of 24 hours on June 21 only. At the Arctic Circle and locations slightly south — such as Fairbanks, which is 200 miles (320 km) south of the circle — due to refraction, the sun gives the appearance of being continuously visible for a couple of days.

This is why locals cut back on sleep and get crazy about late-night golfing. Take Brent Curtis, for instance, whose personal golfing marathon amounts to 15 non-stop hours on the course. “In the next six-month-long winter, that’s for sure,” he says with a broad grin, “there is enough time to catch up on snoozing.”

If You Go
The last tee time for the 9-hole Fairbanks Golf & Country Club is 11 p.m. during June and July.