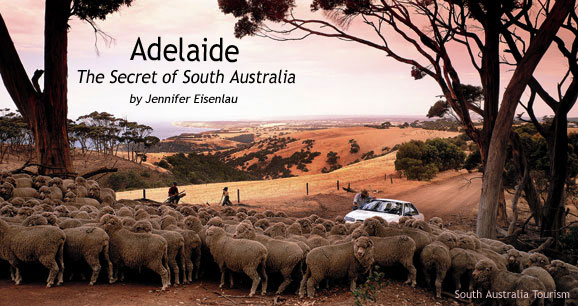 My friends, two very urbane Australians with a hip North Sydney apartment, gasped when I told them of my travel plans.“Adelaide?” she asked. “By choice?” he inquired. Of course by choice. Why not? I wasn’t sure why they seemed displeased by the notion of Adelaide, situated on Australia’s southern coastline, 124 miles (200 km) northwest of Melbourne. It’s not as if they’d ever been there. According to Bill Bryson in his travel narrative In a Sunburnt Country:

“Adelaide is the most overlooked of Australia’s principal cities … for it rarely makes the news or gets a mention in anyone’s conversation. It is to Australia essentially what Australia is to the world — a place pleasantly regarded but far away and seldom thought about.” Bryson wryly writes that Adelaide is “ … unquestionably a lovely city. Everyone is agreed on that, including millions who have never been there.”

I wanted a pleasant and fun place to take my young son. And as for me, I love wine. Adelaide seemed a good choice for us: There’s a zoo, lots of free museums, a 1,800-acre greenbelt encircling the city and approximately 50 vineyards nearby. The Barossa Valley, where more than 25 percent of Australia’s wines are crafted, is just a half-hour’s drive from the city.

Adelaide is charmingly friendly. Locals were eager to show us the city, which was settled by immigrants in the 1830s, not convicts, as in most of Australia — a fact that locals are quick to point out to visitors.

We enjoyed roaming the streets, which are laid out on a grid, so finding places is easy. The many Victorian-style houses are attractive and tidy, and they sport beautiful gardens. In contrast to the British veneer, this city is thoroughly modern and diverse. At the University of Adelaide, we saw Asian students with iPods and skateboards strolling or cruising past ornate, century-old buildings and gardens.

Desk clerks and waiters were chatty and helpful. While looking for the children’s book Possum Magic by Adelaide writer Mem Fox, the Borders clerk asked if we had eaten any of the treats mentioned in the text. After a nice conversation, she pointed us in the direction of Cole’s Supermarket, where we found lamingtons — pieces of sponge cake coated in chocolate and rolled in coconut — the first of many delicious Aussie cakes we would sample on the trip. All part of my research, of course.

A trip to the grocery store confirmed what I had suspected: Adelaide is affordable. Even ignoring the favorable U.S./Australia currency exchange ($1 US = $1.30 Australian), Adelaide offers good deals on lodging and dining, and it is less expensive than Sydney or Melbourne, two cities of similar size and scope.

For example, the 5-star Medina Grand Treasury, located in the city center, offers one-bedroom apartments with breakfast for $AU 207 (US$ 157). For visitors, the affordable Discover Adelaide Card (AU$ 48 / US$ 36) offers eight passes to 14 of the city’s attractions, such as the Adelaide Explorer City Tour and the Adelaide Zoo.

We were delighted to discover that most of Adelaide’s museums are free, including The South Australia Museum, The Migration Museum, the Art Gallery of South Australia and the National Wine Center. And to make things even easier, the museums stand shoulder to shoulder along North Terrace. There’s even a free bus called the Bee Line (99B) that loops around the city.

At the Museum of Natural History and Science, my son and I viewed a giant squid that stretched four floors, modeled on a dead squid found floating off the Australian coast; saw every Australian animal known to science in a taxidermy display; and ogled giant gold nuggets and rare opals. We were delighted to take part in an Australian learning experience when we listened in on a curator’s talk with a group of Aussie school kids in their school uniforms, complete with bush hats.

Adelaide is even a little bit foreign. On a tour of the Central Market — the Southern Hemisphere’s largest fruit and produce bazaar — with Susie’s Boutique Tours, we had the opportunity to see, smell and taste Adelaide’s Italian, Russian, Asian, French, Turkish and Aboriginal cultures. We sampled all sorts of free goodies, only to whet the appetite for lunch later at Lucia’s — one of the country’s first pizza parlors.

After a few days in the city, we drove 28 miles (45 km) northwest to the Barossa Valley, looking at the vineyards and stopping for cellar-door samples. The trip was enhanced by a tour of the National Wine Center in Adelaide. At an educational wine tasting (AU$ 5) I learned how to identity a merlot’s flavor, clarity and bouquet. The whole family/wine theme came together as my son and I played with the interactive wine computer; we made virtual chardonnay. Our batch was, according to the virtual wine connoisseur who sampled our wine, “Utterly appalling!” Fortunately, the case of shiraz I bought — made by the oenology students from the University of Adelaide — was utterly yummy (and only AU$ 5 per bottle!).

I returned to Sydney and told my friends that they had to visit Adelaide; Bill Bryson was right! Adelaide offers, he states, “a dash of classiness and respectful venerability that Sydney and Melbourne all too often discarded for the sequined glitter of skyscrapers.” I raised my glass of shiraz in a toast to Adelaide — I couldn’t agree more.