The old and new buildings in Berlin merge together like the history. The city is perfectly balanced, between the buzz of people flying by on bikes while not feeling crowded like other big cities. I was hoping to immerse myself in history, but Berlin, Germany is a thriving city that offers more than an insight into its past. 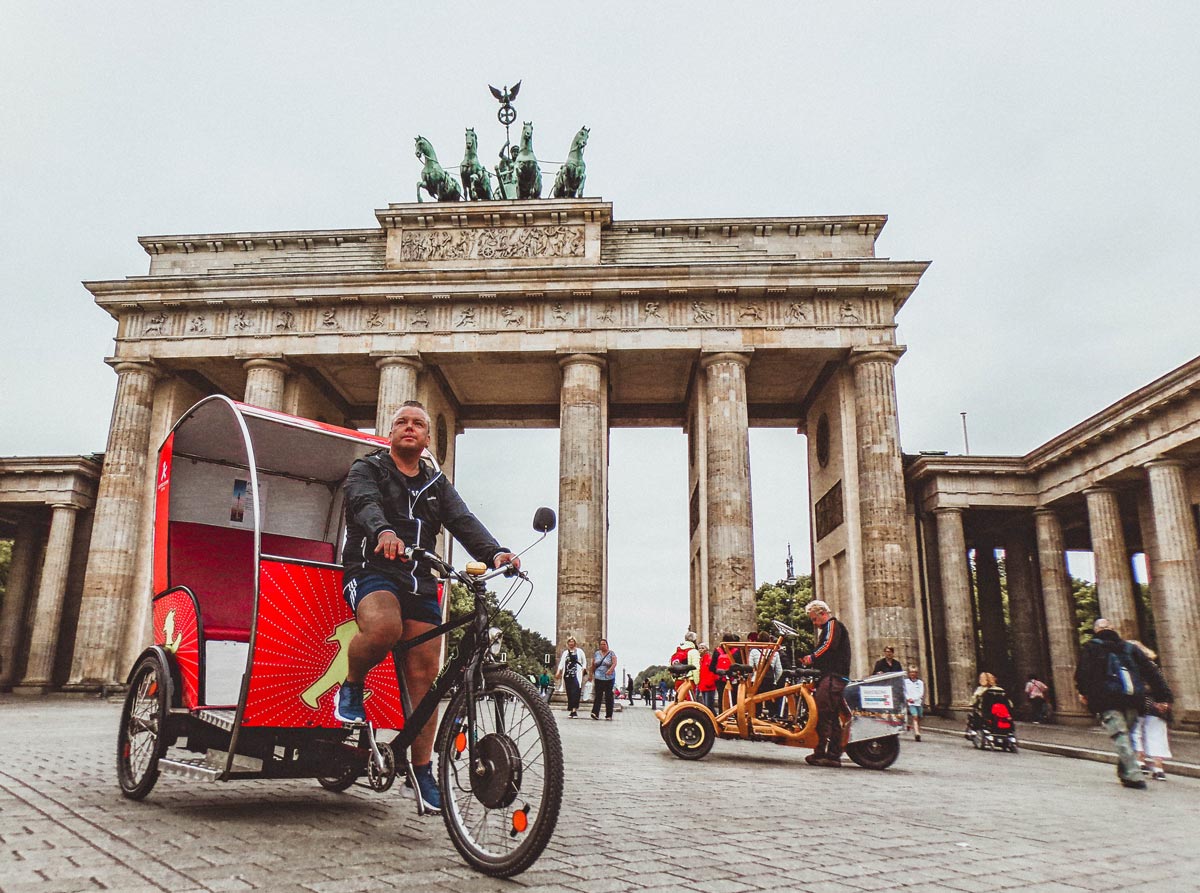 How to Get Around Berlin

Staying in the Mitte neighborhood, Berlin’s landmarks were no more than half an hour by foot, so we took our time strolling through the city.

Walking through different neighborhoods and people-watching give a real sense of the atmosphere, and in Berlin each area has a different feel.

There are bikes and scooters scattered at every corner, and they can be paid for through PayPal for a quicker way around the city.

The buses are reasonably priced if you prefer to go straight to your destination.

While I enjoyed walking, the city is too big to walk everywhere, so we explored a different area each day of our visit.

Our first stop was Brandenburg Gate. It is one of the most impressive architectural feats in the city with a noteworthy history. The Brandenburg Gate is especially impressive at night when the lights cast shadows on its columns and carvings etched inside and out the looming structure.

After strolling down the tree-lined walkway through the Gate, we headed across the road to the Reichstag, which stands impressively with its spectacular glass dome bringing this classical building into the modern age. The outside of the building is a stark contrast from its modern interior and the view of Berlin from the terrace or dome is a bonus.

A short walk down the road is the Memorial to the Murdered Jews of Europe, which commemorates the six million Jewish victims of the Nazi Holocaust. While interesting to see the 2,711 concrete blocks and the undulating pathway dividing them, it is not a sombre or respectful place.

Rounding one of the stones we met a young man dancing, and there were people taking selfies and standing on top of the stones. While having a space to ponder the tragedy is thoughtful, this memorial doesn’t reflect the horror, although possibly no memorial would.

Facing the memorial is Berlin’s biggest park, Tiergarten. It has 12 memorials, a zoo, an aquarium, and a tearoom, to name a few of its features. Strolling through the almost 519 acres of park you wouldn’t know you were in the midst of a bustling city until you catch a glimpse of the buildings rising above the tree line.

As we lounged on a bench and rested our weary feet, dogs chased each other through the trees, people sailed past on bikes and people lay sun-bathing on a temperate September day.

Several other parks dot the city, or you can head out farther for bathing lakes or Charlottenburg Palace and its gardens on the outskirts.

Check out the Many Museums in Berlin

On our second day, we stumbled across the Topography of Terror. It is a free, partly open-air exhibition. Positioned on the site of the previous headquarters of the SS and Gestapo, it provides information on this terrible time in history during the Nazi reign, which ended in May 1945.

Outdoor billboards run along part of the former Berlin wall and detail the campaign to exterminate Warsaw. Video footage of the wreckage of Warsaw is particularly harrowing.

After this detour, we headed to Berlin Story Bunker. Situated in a huge World War II concrete bunker, it is a little claustrophobic, adding a sense of eeriness to the subject matter.

There are three floors of exhibits, starting with the birth of Hitler until after World War II. The museum includes some of Hitler’s paintings and takes a refreshingly unbiased approach to the man.

With more than 150 museums in Berlin, it can be hard to pick. At Museum Island there are five museums where we spent most of our third day.

The one to pick if short on time is the Pergamon. It showcases the city of Babylon. Reconstructing the deep blue gate of the city, the Pergamon transports you back to a decadent Middle East.

Museum Island is worth a visit for its market and green areas even if you don’t want to go into any of the museums. We lay on the grass beside Berlin Cathedral, soaking up the sounds of a balmy Berlin day, as people took photographs beside the fountain and couples sipped wine.

There are a few places to get good views of Berlin, including the TV Tower and the Reichstag. But my favorite was the Welt Balloon. Near Checkpoint Charlie (which is only worth a visit for the informative billboards), this hot air balloon is anchored to the ground and takes you up 150 metres (492 feet). I held on to my husband as the wind shook it ever so slightly. Did I mention I’m afraid of heights?

However, it was worth gritting my teeth because of the sprawling view of Berlin and the adrenaline rush. You can get a clear view to delineate the division of east and west Berlin by the style of the buildings.

While we were floating above the landmarks, an environmental rally was taking place, with tens of thousands demonstrating at Brandenburg Gate. The raised voices reached us in the balloon.

Get a Beer in Berlin

After facing my fear in the balloon, I deserved a drink. When in Berlin you should take advantage of their laws on public drinking and sit in a park with a beer.

As it was getting dark, we headed to Augustiner, a restaurant where the waitresses wore lederhosen and served steins of German beer. We sampled sausages and cabbage, which we couldn’t finish. The jovial atmosphere (not surprising since they serve steins) was great for people-watching.

Get out of Mitte

The Kreuzberg district is just outside Mitte and boasts a hipster vibe. Its boutique cafes and walks along the canal offer a popular alternative to the central zone.

I was drawn to Berlin for the history, but the city is living in the 21st century. While the past is acknowledged, it offers the perks of a big city with quirkiness and a unique style.

If You Go to Berlin

Author Bio: Since she lives in Northern Ireland, Rebecca Boyle tries to go somewhere sunny as much as possible. She is a qualified Journalist and trained chef who writes on everything from travel to politics, all while holding down a 9 am-5 pm job.