From the top of the hill, it was as if you could see all of the Baja; as if it went on forever. Salvador, my pro-bono tour guide, had brought his group of tourists to a ranch where we gathered our things and prepared for an hour’s hike to our allotted destination: the cave paintings.

The ranch was owned by a doctor. The land was preserved by the government. Cats and chickens were scattered everywhere, living peacefully amongst each other amidst finely kept gardens. Rows of aloe vera led us to a downward trail lined with rocks and boulders. As we began our descent, the group petered off into smaller packs, mine of course, consisting of none but Salvador and myself.

It was enough in itself, just being in the desert, being engulfed by it. Feeling the mountains swallow us whole as we made our way deeper into the valley. Not a sound but the gentle wind and the crunch of rough soil beneath our feet. Giant, rusted coloured boulders protruded from lush, vibrant green shrubs. Trickles of crystal clear water guided us through towering rock faces.

The sun was hot, but the wind was brisk, and when we reached the caves I felt a jab of sadness knowing our exploration had reached its climax. As the members of our group dispersed among the ancient drawings, I felt a hand press lightly on my shoulder. It was Salvador.

Oh boy. I couldn’t say I didn’t see this coming. I smiled and wiggled my way out from under his chubby handed grasp and into the crowd, awing at the cave’s timeless wonders.

The paintings were almost unfathomable. Images of cows, fish, witch doctors, and hand prints. Everywhere hand prints. Salvador preached theories of what each drawing could have or may have meant, though I hardly listened. I wasn’t interested in hearing a bunch of people’s hypothetical understanding of a past we’ll never truly have a knowledge of.

All I wanted to do was sit and relish in knowing that hundreds of thousands of years ago, someone just like me was sitting exactly where I was, maybe painting a turtle on a rock wall, maybe being oddly pursued by an old man, or maybe just simply being, letting the soft Mexican breeze soothe her soul as it brushed its way gently through her unkempt hair.

The man with the attitude took a step too close to the paintings. Salvador sternly asked that he keep a respectable distance. He pretended not to hear, but he had heard. We had all heard. Again, Salvador repeated his plea, this time walking towards the man. Holding his ground, the man leaned closer to take a picture with his pretentiously large camera, waited for Salvador to meet him, then overtly rolled his eyes and stepped down.

It was time to go.

As we gathered together once again to begin our journey back, Salvador hesitated.

Caves: two for one…

The second cave was another forty-five minute hike. I looked at the old ladies and wondered if it were best we leave them behind and let nature run its course. After all, that’s what these Mexican natives would have done. If we were here to see their handy work, we might as well implement their way of living while we we’re at it.

As Salvador led us deeper through the canyon, the sun grew larger in the piercing blue sky, and poured down upon us. We each shed layers and walked a little slower until we came to a wired fence sprinkled with signs of no entry. Salvador assured us it was not a problem as he pried the wires apart and held our hands as we awkwardly maneuvered our way in between and through; my hand being the last, was held tighter and just a touch longer.

He was right. The second caves were smaller, more intimate, and much better. A sense of insignificance washed over me as I lingered amongst the presence of history. I didn’t want to leave.

But alas, the sun was beating down, and the grannies in the bunch were beginning to liquify. I took a large inhale both physically and visually before we made our way back to civilization.

Back at the ranch, little did I know, Salvador had prepared lunches for everyone to enjoy at a stone picnic table amid the chickens, the cats, and the impeccable gardens. Ham and cheese sandwiches wrapped in tinfoil, with a banana and tiny bags of sugar coated candies to share; a clear indication that these tours were solely geared toward gringos. The pride in his eyes, as everyone bit into his hand crafted kaisers was adorable. He was adorable. Despite his mildly inappropriate desire to be close to me.

I went to the washroom to responsibly prepare for the long and bumpy journey homeward and returned midway through a conversation, quite arousing.

“No, you’re right. I have heard that Mexican coke is significantly better than American coke.”

My eyes widened and my ears perked at the seventy-something woman’s alarming, yet entirely enthralling statement. Another chimed in,

“It’s in the production. Mexican coke is just better quality.” The table nodded in agreement.

I was dumbfounded. And yet impressed. Now this was a conversation I could tuck into. Until, that is, Salvador reached for the bottle of Coca-Cola he had since shared in my absence and began topping up the table’s plastic cups. I immediately burst into laughter, drawing everyone’s attention.

“Context is a remarkable thing.” I explained. After a moment, realization was met with an accumulation of laughter, the old ladies leading the pack. Salvador chuckled silently and began packing our things.

He smiled and motioned for us all to return to the van.

This is the tour that never ends…

We said goodbye, Salvador and I, to the last of our group at Hotel Serenidad. While his navy van idled, us inside, he said hesitantly,

“Would you like to stay for a drink at the bar?”

I had read about Hotel Serenidad on quite a few websites while searching for the best in Mulege. Its bar was deemed top grade when it came to margaritas. I looked at my lonely tour guide and though there were a million and one reasons to say no, I said yes.

As we wandered through the hotel towards the bar, Salvador was greeted warmly by many, both staff and guests alike. He was good at his job, and I could sense his emanating pride with each salutation. 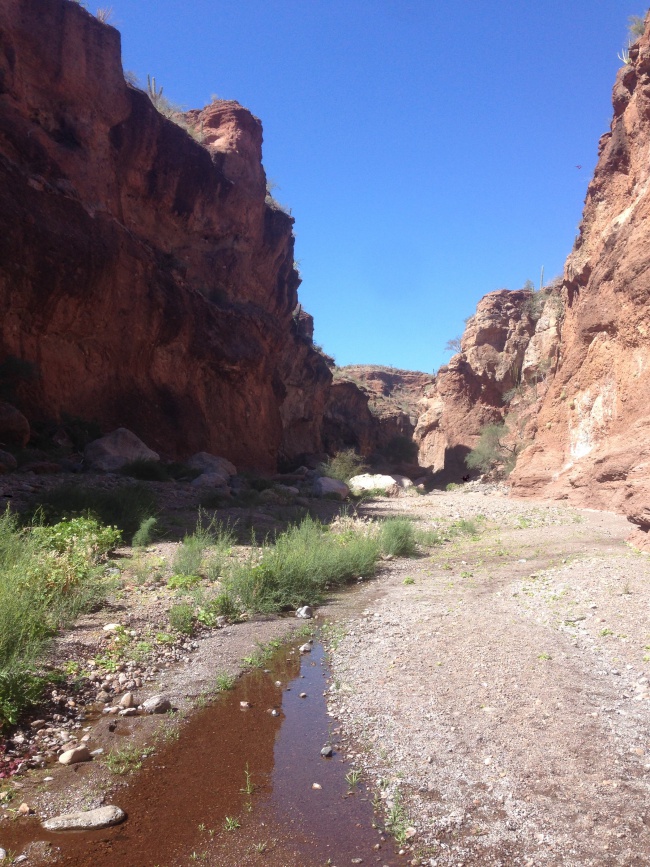 He ordered me a margarita and himself and gin and tonic. When we sat at the bar, I saw his mood suddenly shift. He became solemn, his mind seemingly elsewhere. I found myself forcibly guiding our conversation, trying to bring him back from wherever it was he had gone. We talked briefly of his children, where they were and how little he saw them, but mostly we sat in silence.

It was strange at first, this change in him, but what was more strange was how comfortable I became in our silence; how comfortable we both seemed to be. As I slowly sipped the fishbowl of margarita before me, I no longer tried to fill our space with words. It was as if we had both agreed that just being next to someone was enough.

The ride back to Van Morrison was the same. Quiet, yet pleasant. As the road wound and met with the river, Salvador told me how, on most nights, the beach just outside town is filled with music and dancing and asked me to join him and a bottle of tequila.

It was a tough call. The day had seemed innocent enough, though the miniscule, often completely ignored reason in the small corner of the back of my head was screaming for a hard pass. The idea of oceanside live music, locals shaking their hips, their feet spraying warm sand in their wake as the sun set over swaying palm trees sounded far too picturesque. So once again, I agreed.

The price one pays for free things…

We pulled up to my camping site. I got out and so did Salvador. He gave me a hug and told me he’d return before sunset to take me to the beach.

And then he tried to kiss me.

“I’m so sorry.” He immediately backed away, his head hung low, his posture sunken. A look of mortification, almost fear, fell over him and I suddenly felt sad. He looked so small and fragile, like somewhere between raising a family and losing it, he had forgotten the kind of man he was. He was a proud man, I could tell. A kind man, and a good man. But a sad man. And I was a fleeting ray of optimism that he just didn’t know what to do with.

“I’m very lonely.” He wouldn’t look me in the eye.

Once again we found ourselves wrapped in silence.

He shook his head and made his way around the van.

The next day, after spending the afternoon wandering in and out of shops and through the narrow streets of Mulege, I stopped in the town square for a refreshing agua fresca, and there he was. He saw me and hesitated, unsure of what to do.

Click here to read more of my adventures at The Wanderess: Baja Bound by Campervan

Chelsea Beamish
At the green age of 22, Chelsea Beamish found herself alone in the humid depths of New Delhi, resulting in a flourishing relationship with blogging. Though a Canadian native, this friendship has lead her bounding across the globe for 8 years. Chelsea’s writing is known to take you from the mundane confines of your barcalounger to a world of humourous misadventure; be it among the cobbled streets of London, scaling breathtaking heights in Cape Town, or blazing trails on horseback through the deserts of Mexico.
Latest posts by Chelsea Beamish (see all)