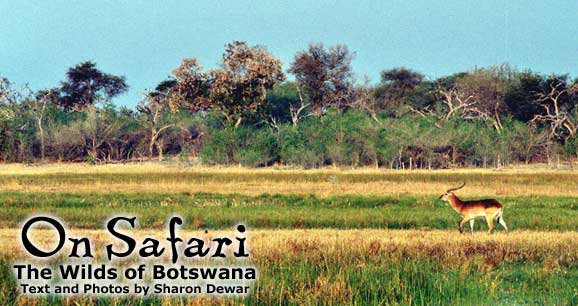 In Botswana, the army of elephants stood stiffly, alert and imposing, their powerful gray silhouettes facing our open-air Land Cruiser.

It was our second night on safari, and the sky was dark and foreboding as we drove alongside Botswana’s Khwai River, a tributary that feeds into the Okavango Delta, on the northern border of the Moremi Game Reserve.

Hundreds of elephants filled the river, bathing and drinking after the heat of the day had subsided.

Seemingly endless herds continued to arrive, like phantoms, mutely making their way from the brush to the water. We had parked next to the river to quietly observe the herds.

I sat silently, wrapped in darkness, with three other safarigoers and our guide.

The calm and tranquility was abruptly shattered when a vehicle careened down the dusty road, obviously in a hurry and with little interest in watching elephants or concern for startling them.

Meeting with Our Guide

Our guide, Dave Carson, sensing the animals’ surprise and tension, remained calm, but on high alert. “Are you ready for a show?” he asked.

I held my breath, not knowing what to expect. The elephants panicked and tore through the water, trunks in the air, trumpeting and screaming.

Nearly 30 enormous animals stampeded toward us, looking like a wall of doom and sounding like a rushing waterfall.

My heart raced; I couldn’t breathe. Mere feet from a mass collision of flesh on metal, the tirade of elephants veered to the left, running behind our vehicle and disappearing into the bush.

I heaved a hot breath and sighs of relief were heard all around.

Adrenaline coursed through my veins, and I realized then that African safaris are not for the faint of heart.

Little did I know that this would be the first of many heart-racing adventures ahead.

It was my first trip to Africa, a land of dreams and Discovery channel shows, rugged and untamed.

I wanted to witness one of Earth’s last wild strongholds — a feral frontier — before it’s gone.

Botswana, in south-central Africa, I was told, is the place to do just that: a land teeming with wildlife, but few tourists.

A friend and I had planned our getaway for September, one of the best times to visit the area.

The southern-hemisphere winter is nearing its end then, the weather is pleasant and it’s the dry season, which means that the remaining water sources are sure to be abundant with wildlife.

Beginning of Our Adventure

Our adventure began at a small airport in Maun, gateway to the Okavango Delta, the world’s largest inland delta, where the waters of the Okavango River meet the Kalahari Desert, transforming the landscape into a gigantic 5,000-square-mile (12, 950 km²) swamp.

In the village of Maun we met the rest of the tour group and our safari guides. We boarded two Land Cruisers and departed on a rugged five-hour journey to Moghoto Camp, a private campsite near the Moremi Game Reserve.

As we journeyed through barren desert toward one of the delta’s wet, outstretched fingers, the landscape transformed from lifeless desolation to wildlife haven.

I watched, mesmerized, as a monstrous, confident, wild-elephant bull sauntered across the dirt road mere feet away.

He strutted slowly, with uncanny silence, his enormous gray feet kissing the earth without a whisper.

Impala gracefully leapt through golden grasses alongside grazing zebra and waterbuck. Within the marshy reeds and lilies of the waterway, a hippopotamus bubbled.

Then eyes peeked out, slow, curious, intense. Purplish-gray nostrils breached, snorted, and then submerged, disappearing under a glassy surface.

Three large, tawny figures took shape among the ocher grasses alongside the road. Lions! A large, commanding male shot up and stared at us with daunting yellow eyes.

We were in awe. He was not, however, and quickly fell back down with a thump and went to sleep.

Not far from the lions, our campsite was tucked into a cozy grove of acacia trees. A cheerful staff greeted us with a candlelight dinner.

To my surprise, it wasn’t typical campfire fare. Instead, we were treated to butternut-squash soup, quiche, fresh-baked bread, vegetables and wine.

My tent was as delightful and extravagant as the meal — a roomy tent adorned with thick, comfortable beds, a hurricane lantern and nightstand.

Most surprising, and certainly a bit of a relief, was its attached primitive bathroom and shower. After seeing the lions, the idea of leaving the tent for a midnight visit to the latrine wasn’t appealing.

Despite the comfy beds, sleep was nearly impossible, as I lay awake reeling with excitement, listening to the fascinating foreign sounds of the night.

Deep guttural moans from lions in the distance, the choruses of painted reed frogs like a symphony of bamboo wind chimes, the nearby whooping of hyena.

Hippos’ rowdy honks, groans and snorts were comical-sounding, like hundreds of whoopee cushions.

How the Morning Begins

With the morning came a whole new world of music from the birds chattering to the drone of thousands of bees in the treetops.

Each morning began at 5 a.m. with a hasty breakfast, then a game drive at sunrise to capture wildlife images by the golden glow of early light.

The hot, dry afternoons easily lent themselves to siestas until the air cooled enough for a late-afternoon game drive. Each evening culminated with a night game drive.

Using a spotlight, we’d seek out nocturnal critters lurking in the darkness, from busybody springhares and porcupines to beautiful and elusive leopards.

Night drives, off-roading and walking safaris are not allowed in Botswana’s national parks and game reserves, but are permitted on privately managed reserves such as the Khwai Development Trust that borders Moremi Reserve.

Both day and night, elephants were everywhere. They seemed to linger around every bend and be hiding behind every bush.

Botswana’s elephant population is currently estimated at around 120,000 — the largest concentration in Africa.

Large swaths of trees and brush in many areas are stripped and savaged by the enormous eating machines, leaving only skeletal remains of forests.

Botswana, like many southern Africa nations, is struggling with how to manage the ever-growing elephant population.

No matter how common the elephants are, the awe of their majestic presence never fully wanes — especially when you approach one on foot.

Our guide turned out to be an exceptional tracker, studying prints in the sand like a forensic detective at a crime scene, determining the animal’s age, gender and how far away the animal was simply by looking at a footprint.

Amazingly, his estimations were spot-on. As we came to a clearing, two large bull elephants appeared on the horizon.

Stealthily we stalked, admiring them from only 20 feet (6 m) away. We were filled with both fear and beguilement. Watching the bulls so closely from ground level was breathtaking.

A peculiar blend of adrenaline and a sense of total serenity was the prevalent feeling while living in Botswana’s wilderness.

Within days we observed enormous herds of cape buffalo, zebra and antelope. We sat in awe as two African fish eagles engaged in a tangled mid-flight courtship, talons locked together, tumbling earthward.

We witnessed the ferociousness of lions ambushing and killing an unlucky warthog right in front of our eyes.

On another day we saw how the entire ecosystem teams up against the predators, as a male lion was nearly killed by a hippo while crossing a river, and then was charged by bull elephants when he eventually made it to land.

I was forewarned that the magic of Africa would forever change me; it would be stirring in my blood. Indeed, it’s true.

A traveler will typically pay between US$ 300 and US$ 800 or more per day for an organized safari tour, depending upon the time of year.

Pack lightly. Travel throughout Botswana and southern Africa is often aboard small bush planes that adhere to a strict luggage weight limit of 26 to 33 pounds (12-15 kilos).

Make sure your agent has been there, so you know exactly what to expect.

Video: 3 Important Tips for Driving Abroad
Next Post: Up Close and Personal: The Galapagos Islands