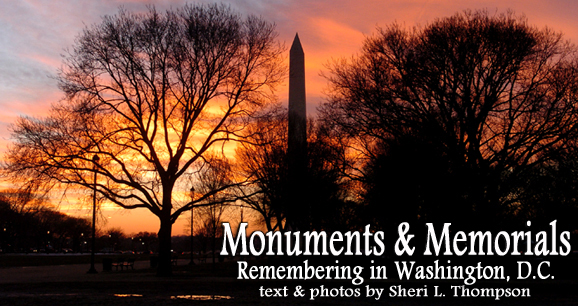 Despite the buzzing pace and constant change that defines much of Washington, D.C., I wanted to delve into the heart of this city where time slows down and the past is revered.

My journey through history begins at the National Mall, a sweep of grassy land stretching over 2 miles (3.2 kilometers). Bordering the U.S. Capitol  to the east and with the Lincoln Memorial defining its western edge, “The Mall” is in close proximity to numerous monuments and museums.

The Washington Monument, the tallest silhouette in the skyline, is prominent from a distance and magnificent up close. At more than 555 feet (169.3 meters), the stone obelisk towers above me. On this particularly windy day, the flags encircling the structure  snap fiercely to attention. Dedicated in 1985, more than  30 years after construction began, Robert Mills’ design included stones donated from a variety of cultural, social and professional groups as well as foreign nations. The stature of the piece is quite telling as it commemorates the nation’s first president, George Washington, who, as Henry Lee stated, was “”first in war, first in peace, and first in the hearts of his countrymen.”

I detour to Constitution Gardens, a 52-acre (210,440 m2) park adjacent to The Mall and referred to as “a living tribute.” Crossing a short wooden bridge, I step foot onto the small memorial island designed by Joseph Brown. In 1976, the nation’s bicentennial, this little haven was dedicated to the 56 signers of the Declaration of Independence. Positioned in a semi-circle on a brick walkway, individual blocks of granite are inscribed with each signature along with their trades and cities.

Back at The Mall,  the National World War II Memorial, designed by Friedrich St. Florian, is a massive plaza located directly between the Washington and Lincoln memorials. Not only are soldiers remembered here but also civilians involved in the war effort at home.

It would take hours, or even days, to fully absorb the entire structure. Fifty-six granite pillars encircle the plaza, each with the name of a state or U.S. territory. The “Rainbow Pool” in the center of the plaza consists of a circular set of fountains. Brass eagles, archways, stone
wreaths, inscribed quotes, relief panels and military seals are just a few of the commemorative details.

However, the most striking feature, immediately seen from within the plaza, is the 9-foot (2.7 meter) high Freedom Wall. A panel is dotted with row after row of gold stars, 4,043 in all,  each star representing 100 fallen soldiers.

By this time, my heart is heavy and my head is full. I find it impossible to separate the history I’ve learned from the ghosts that accompany it. I head back to the hotel. 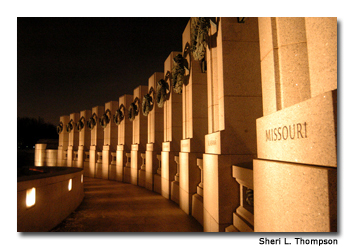 After dinner, I again wander toward The Mall. The Washington Monument, illuminated and severe in the night sky, makes it easy to find my way. As I walk westward, I pass the pillars of the WWII Memorial, each lit from the base on both sides, casting an array of fierce shadows upward.

Strolling along the lengthy Reflection Pool, I note the stillness of the water. Others are also wandering near the pool, yet there’s a peaceful silence. As we pass one another, a polite nod and smile are exchanged but it’s as though no one is willing to break the serenity with chatter.

Finally, I arrive at the steps of the Lincoln Memorial, built to honor the 16th U.S. president. The white marble columns are so brilliant they appear to be nearly glowing. While it had looked quite regal from across the pool, the memorial was increasingly awe-inspiring as I edged closer.

Henry Bacon, designer of both the building and the pool, had used a Greek-style temple design for this 99 foot (30 meter) structure. Inside,  words from Lincoln’s Gettysburg Address and an inaugural speech are inscribed on the lit walls of the sanctuary. Colorful murals, created by Jules Guerin, are painted above the inscriptions, depicting the freeing of slaves and unity between North and South.

The nearly 20×20 foot (6×6 meter) marble statue of a seated Abraham Lincoln demands my attention. Sculpted by Daniel Chester French, Lincoln is sitting in a no-nonsense manner on a throne, with a somber facial expression  as he gazes toward the pool. I turn to look in the same direction and take in a spectacular view of the Washington Monument reflection distinctly laid out in the water. 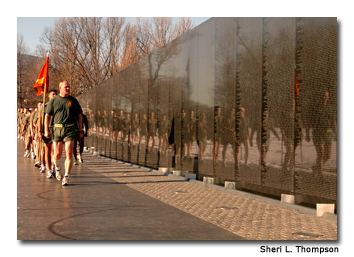 The next day, I have a final stop to make before leaving town and walk in the brisk morning air to the western perimeter of Consitution Gardens. As I walk across the grounds I see the sleek slabs of black granite edge out from the earth from two directions, angling upward until they meet in  a long V.

Designed by Maya Lin and completed in 1982, the Vietnam Veterans Memorial Wall leaves behind the controversy surrounding this divisive war and focuses on honoring the lives lost. More than 58,000 names of those killed  or  missing are  etched into the polished sheet. At this early hour a man stands intently before the wall, a pensive look on his face. He leans toward the stone with his forearms, places a piece of white paper on it and, with pencil in hand, rubs the paper over one name in particular.

As I turn to go, I hear yelling and chanting near the gardens. A group of jogging Marines arrive and, the moment they reach the memorial, immediately slow to a walk and go silent. They continue along the path in front of the wall, many glancing over as they stride by.

Looking back at the wall, I’m struck by the haunting reflections of these military men and women, clearly visible in the glossy surface, behind the thousands of names they pass.