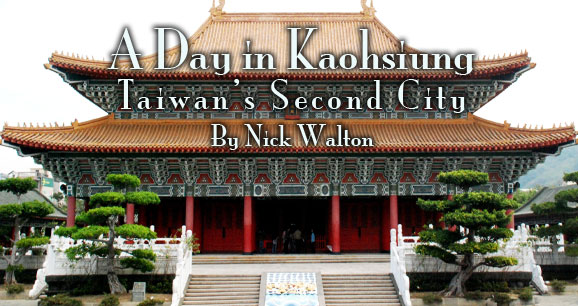 It seems a fitting entrance, approaching a city with such a rich maritime history by ship. From the top deck of the Silver Whisper cruise ship, Kaohsiung, Taiwan’s second-largest city, materializes from the early morning mist.

First the landmark 85-story Tuntex Sky Tower rears its head above the clouds. Then,  quickly, cliffs loom at the ship’s sides, wind-whipped black sand beaches seem within reaching distance and the cruise liner passes through a tiny harbor mouth into a bustling port, where tankers, freighters and battleships line up in neat rows.

Home to the Taiwanese navy as well as light and heavy manufacturing, Kaohsiung grew with Japanese industrial know-how from a tiny fishing village to Taiwan’s second-busiest port. Ships of all sizes chug up and down orderly shipping channels, like lanes in an Olympic-size swimming pool, squeezed between the mainland and the slim, picturesque island of Cijin.

It’s not just sailors and fishermen who have traditionally called Kaohsiung home. The region has always been popular with pilgrims traveling to its many Confucius, Taoist and Buddhist temples, and now sun worshippers are heading to Kenting National Park, south of the city. The development of a high-speed train from the capital Taipei has cut travel time from five hours to 90 minutes, allowing Kaohsiung the chance of a tourism renaissance.

As the ship is nudged into position by tugs, tiny ferries flitter across the harbor to Cijin Island. Acting as a natural breakwater for the port, Cijin has a completely different feel from the rest of Kaohsiung, more like a wafer-thin seaside retreat, with low-rise homes and waterside promenades. 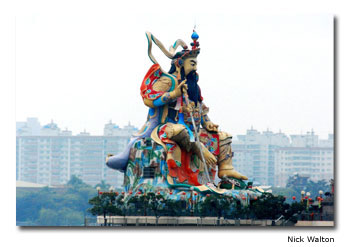 Visitors looking to escape the city madness can take ferries from the romantically named Love and Glory piers on the Love River, which spills into the harbor, or opt for  the less romantic route through the harbor tunnel. They can dine at seafood restaurants, take evening walks to the Cihou Lighthouse at the harbor’s entrance, ride in the island’s iconic three-wheel pedicabs, or visit the 300-year-old Tien Hou Temple, dedicated to the Goddess of the Sea.

Temples play an important role in the life of Kaohsiung – not surprising, with the superstitious nature of the seafarers who have called the region home for hundreds of years. The Lotus Pond is a man-made lake named for its abundance of summer time blooms, nestled between Guei (Turtle Mountain) to the south and Banping (Half-Screen Mountain) to the north. On its banks, the Wen Temple dates back to 1686 and remains a popular first stop for visitors ambling along the lake’s western shoreline, which is dotted with temples, shrines, parks and religious schools. A new poetry walk celebrates the city’s literary history, with 15 pieces, all written in traditional Chinese by local poets, inscribed on tablets along the shore front.

At the Wen Temple, tourists from Asia and beyond retreat from the heat to the shade of the entrance courtyard, a sugar cane vendor working flat out at his crusher trying to quench their thirsts. The air reeks of sweet incense mixed with fresh sugar cane and the hint of durians at nearby market stalls.

In contrast to the Wen Temple’s ancient timber columns, incense clouds and worn stone stairs, the twin Dragon and Tiger Pagodas, located directly across the street, look like a mythical amusement park.

Throngs of tourists saunter down zig-zag pathways, raised on stilts above the lake, before climbing into the yawning mouth of a massive turquoise dragon, sprawled on the pier, its lips bright red and its mane pure white. The “insides” of the concrete dragon are decorated with colorful murals of heaven and hell, and as visitors emerge into the light at the other end, they scale one of two seven-leveled, octagonal pagodas (few climb both), which offer expansive views across the lake. Then it’s reverse through a comical tiger, equally as big as its dragon brother, to emerge from a mouth of sharp teeth.

The flow in through the dragon and out through the tiger symbolizes turning bad luck to good, and proves as popular with smiling grandparents as it is with squealing kids, whose yelps echo off the concrete bowels of the mythical beasts. The contrast between the pagodas and the historic Wen Temple is extreme, making these the two most popular shrines on the shoreline.

Farther down the lakefront and reached by a bridge, the Spring and Autumn Pavilions float out closer to the center of the lake, while beyond, celestial Emperor Bei Ji Zi Wei glares down at tourists in all his warrior regalia. The lakeside road is as busy at night, when the pagodas, dragons, tigers and emperors are lit up, as it is during the day. 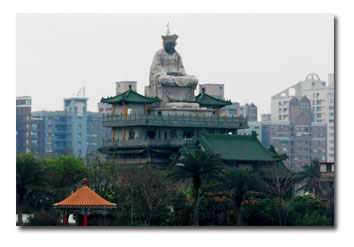 At the end of the Lotus Pond, the massive New Confucius Temple was finished in 1976 and is modeled on the temple at Qufu in China’s Shandong Province, the home of Confucius, although the main building at the center of the complex resembles the Forbidden City’s Taihe Hall. Compared to the Wan Temple and the cartoon-like dragon and tiger, Confucius’ temple is stark in its simplicity; the hall is nearly empty and surrounded by a massive, courtyard which lies bare except for signs on the walls telling of Confucius’ teaching and the temple’s construction.

A more contemporary side to Kaohsiung can be found in the city’s Central Park, also known as Rotary Park. Here, nine local artists have collaborated on a project themed on light. Urban Spotlight is a rejuvenated corner of the park, a tree-lined walk punctuated by innovative light exhibits. As the sun hangs low in the sky, families stroll past the light art and take breaks at an open air café, while other people stream from the entrance of the park’s Mass Rapid Transit station – itself a brilliantly lit and imaginative design – searching for dinner.

Kaohsiung comes alive at night, with cultural performance spaces, restaurants (this is Taiwan after all, famous for its food) and a series of bustling night markets. Travelers to the city can follow their taste buds to the Gwanghua Tourist Night Market, in Lingya district, which has been in operation for almost 30 years and offers more than 100 food stalls serving some of Kaohsiung’s delicacies, including bean curd jelly and milkfish congee. Here the air is alive with calls from waitresses to open kitchens filled with cooks and hot woks and the aromas of Taiwan’s pan-Chinese cuisine. A newer night market, next to the General Post Office, specializes in fashion and locally produced jewelery.

When the Silver Whisper leaves Kaohsiung as quietly as it arrived, the harbor is still busy in the inky darkness of night, as fleets of noisy flood-lit fishing boats depart for a night’s angling. Fishermen wave from decks awash with nets and ropes, while paparazzi-like crowds gather to bid farewell to the ship, from Cijin’s Cihou Lighthouse and from Syongihen North Gate, which stands at the lip of the harbor. As the ship turns south, the harbor’s tiny entrance quickly vanishes into the night, and a city waits to be discovered by a host of new travelers.

Roads to Freedom: Solidarity in Gdansk
Next Post: Treasure Hunt: Art and Nature in Sweden’s Lakeland