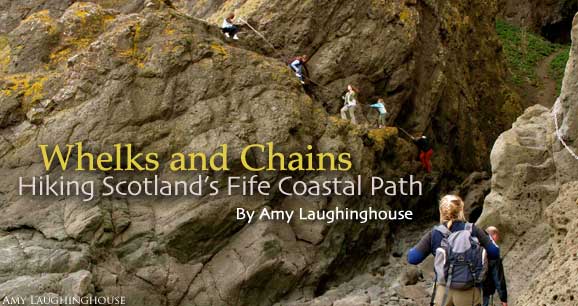 With sweaty-palmed panic and silently questioning my sanity, I’m clinging to a metal chain, using my mud-caked boots to blindly feel for a foothold in a rock face. I had heard that the Elie Chain Walk could be a wee bit tricky.

An offshoot of the Fife Coastal Path – which runs for almost 100 miles on Scotland’s East Coast – the Chain Walk is only a quarter-mile long, but daunting.Heavy-duty chains are fastened to rocks to help hikers across the most difficult parts of the Chain Walk.

A “warning” sign at the start depicts a trio of unfortunate stick figures trapped by the tide, struck by falling rocks and tumbling off a cliff. But as we approached our first gorge, I saw four little girls scampering along the trail like billy goats.

How hard could it be, I thought to myself.Now, having gotten only as far as the second chain, I feel bile rising in my throat and decide that those couldn’t have been children, but tiny Spidey stunt doubles.This should be called the “Elie What-the-Heck-Am-I-Doing-I-Want-My-Mommy Walk,” I reflect, but I suppose that’s too long to fit on the sign. Reluctantly, because I hate to admit defeat, I call ahead to my colleagues to tell them that I’m turning around.

Then the word comes back, “Don’t worry! The worst is over! It’s much easier from here on out.”

They were lying, of course. But I’m glad they did, because it is hugely satisfying (having survived) to reach the end and realize what I’ve accomplished. There are more than half a dozen chains, some strung horizontally along narrow ledges, others leading straight up or down sheer drops more than 20 feet high.

The sea’s rhythmic melody is ever present (unless that was the blood rushing in my ears), and at one point we encounter striking striated rock formations that look like they were formed by a sea monster clawing its way up from the beach. I suppose there would be gorgeous views, too, if I weren’t so focused on the gray stone beneath my hands.

Somewhere between an hour and an eternity later, I emerge on the other side, where long, reassuringly solid green hillsides lead down to the sea. There, giggling and rolling down the slopes, are the girls I saw at the start, accompanied by Jane Burridge of Edinburgh.

“That hike needs an adult,” insists Burridge, before confessing, “My knees are knocking.” I’m feeling a little better about my concerns (cowardice is such an ugly word), until she adds, “My husband does it with our dog under his arm.” Sigh.

Some might dare to undertake that hike toting a Paris Hilton purse-size Chihuahua, but certainly not with a sturdy lug of a beast like Bramble, the lolling-tongued black Labrador that accompanies us on another stretch of the Fife Coastal Path between the fishing villages of Pittenweem and Elie. With Bramble in tow, I’m confident that countryside ranger Tony Wilson, a dry-witted Scotsman with a bushy brown ponytail springing out of a knitted cap, won’t be pulling any mountain goat moves.

We follow a relatively level trail past crescent beaches and scenic castle ruins, serenaded by seabirds and the soft swoosh of the tide, as Wilson keeps up a steady commentary about the geology, flora and fauna.

“It’s one of the best wildlife areas in Scotland,” he says, with coastal islands harboring breeding colonies of seals and a quarter of a million seabirds. “Half of the UK’s population of Eider ducks shelter here in winter, too. There’s one,” Wilson notes, pointing at a brownish bird bobbing offshore. “Well,” he adds, as a sly smile slowly parts his beard, “it’s Eider that, or it’s something else.”

To Wilson, even creatures we can’t see — those below the water — are a marvel. As we walk along a bay, he picks up the shell of a dog whelk and the pyramid shaped shell of a limpet, which has a neat round hole drilled in the top.

“Imagine the limpet is the antelope of the undersea Serengeti, grazing majestically on algae,” he intones, bouncing the shell along. “And the dog whelk is the tiger stalking it,” he adds, edging that shell closer to its prey. “It’s a chase that may last hours.”

When the dog whelk finally “pounces” on the limpet, it punctures a hole in the shell and slowly digests it. Perhaps it’s not as bloody and dramatic as a scene from a National Geographic special, but nonetheless, it’s a very, very bad day for the limpet.

While the tale of the limpet and the dog whelk won’t necessarily set your lips smacking, Wilson is full of handy recipes for plants we pass along the way. “Common sorrel,” he says, proffering a leaf. “It’s usually used to makes sauces for fish.” The sharp lemony taste is due to oxalic acid, which can be poisonous, Wilson reveals after I’ve laid it across my tongue. “But you would need to eat 10 pounds in one sitting to poison yourself,” he adds, seeing me gag mid-chew. “That’s a wheelbarrow load.”

Wilson also ferrets out other edible plants, including garlic mustard and scurvy grass, which is rich in vitamin C and tastes “like rocket, but on steroids,” he observes. Indeed, if I’m ever stranded in the wild, forget British adventurer “Bear” Grylls, who would probably have me choking down snake dung to survive. Wilson is the man I would want in my camp, whipping up a yummy weed salad.

Of course, it’s very unlikely you’ll have to resort to such measures along the Fife Coastal Path, which is chock-a-block with culinary riches. Over a three-day period, I feast at the Michelin-starred Sangsters in Elie, the Wee Restaurant (winner of a Michelin Bib Gourmand award) near the Forth Bridge, and the Anstruther Fish Bar, which won Seafish Fish & Chip Shop of the Year for the United Kingdom.

I ought to feel guilty as I dig into an ice cream cone after polishing off a heaping portion of battered haddock and chips. But if I ever find myself hanging onto a chain on a cliff face again, staring grievous bodily harm in the face, I would hate to think that I’ve left anything unfinished — including dessert.

What to See and Do

Fairmont St. Andrews; telephone 011 44 1334 837000. Located near the city of St. Andrews, famed for its golfing legacy, this 209-room hotel also features a renowned golf course of its own. Turn to the spa and indoor swimming pool to rejuvenate you after 18 holes — or 18 miles on the Fife Coastal Path. For pricing information, visit fairmont.com/standrews.

The Peat Inn by Cupar; telephone 011 44 1334 840206. This cozy inn features eight rooms and a Michelin-starred restaurant which serves French-inspired fare made with fresh local ingredients. For pricing information, visit thepeatinn.co.uk.