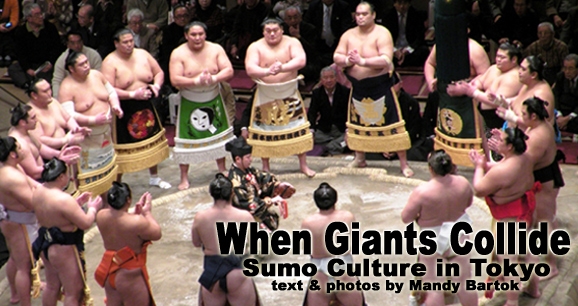 Ichi, ni, san! In unison, the beefy sumo trainees lean slightly to the side and raise their legs to waist level. The hard-packed sand floor shakes ever so slightly as a dozen calloused feet come crashing back to earth. Ichi, ni, san! Thighs quivering, they raise the other leg and, with grunts of exertion, the exercise is repeated.

Ten minutes later, I stretch my own limbs in the back corner of the beya, or sumo stable, as the wrestlers continue their monotonous count. It’s only 8 a.m., but every trainee is sweating profusely. I don’t blame them – they’ve been in the ring since just past daybreak.

I arrived only an hour ago but in that short time I’ve discovered two truths. First, sumo – the ancient sport of Japan – is alive and well. And second, you can forget all those cracks about fat guys in diapers. These men areathletes.

Modern Japan may go ga-ga for her baseball heroes and pack the stands for a soccer match, but it’s sumo that’s still spoken of with an air of prestige and a hint of awe.

While the origins of sumo as a martial art are clouded in mystery, professional sumo began in the 17th century when cash-strapped samurai organized professional tournaments for monetary prizes.

Shinto, Japan’s indigenous religion, still plays a major role in influencing the traditions surrounding the match, from the presence of a Shinto priest in the role of referee to the pre-match purification rituals. Throwing salt into the ring is a common gesture with religious ties and, even here in the stable’s practice area, wrestlers shake handfuls of the white crystals into the dirt every so often.

Catching a glimpse of sumo wrestlers in action outside of their yearly tournaments is an uncommon privilege and not to be missed. Blessed with the opportunity to do just that, I rose with the sun and padded silently down the barely-stirring Tokyo thoroughfares to sit in on an early-morning practice.

Tokyo’s sumo culture centers around the backstreets of Ryogoku, a working-class neighborhood on the eastern side of the capital. Beya are a dime a dozen here, as are restaurants dedicated to keeping the wrestlers fueled. It’s not unusual to see a trainee wandering the lanes in the late afternoon, dressed in his obligatory yukata (cloth kimono) and sandals.

Next to the local rail station, the Kokugikan, an austere yet sprawling arena, is the physical incarnation of every sumo wrestler’s dream. This building plays host to three of the nation’s six grand tournaments every year. It is here, surrounded by throngs of supportive fans, that wrestlers find out – usually in the span of mere 5 second matches – whether these daily training sessions have paid off.

Loose and limber from the stretching exercises, the trainees begin a series of practice bouts. One wrestler is selected to face the others in a continuous onslaught of solid flesh and crunching bone. He remains in the ring until he has faced each trainee, some more than once.

To my untrained eye, the clashes look vicious. Any part of the body is fair game, face and neck included. What apparently looks like near-strangulation to me is merely par for the course.

I’m surprised when one of the slighter wrestlers successfully repels a larger colleague, grappling with his sweat-soaked arms and dragging him down to the earth. In sumo, size does matter, though speed and agility are not to be discounted.

Slim figures have a short shelf life in this sport. However, within weeks the smaller wrestler fills out, due mostly to the heavy diet of the sumo stable. The main source of calories for these agile behemoths ischankonabe, a one-pot dish laden with multiple sources of protein (fish, tofu and chicken with the skin still on are all popular inclusions).

Served in massive quantities and accompanied by generous servings of rice and alcohol, no sumo trainee remains a simple XL for long!

“Which ones are the big winners?” I whisper to my Japanese friend, my interpreter and “ticket in” to this morning’s session. Sumo practices are generally closed affairs and it helps to have a Japanese-speaking friend who can linguistically charm any irascible stable master.

“The yokozuna?” he says, referring to the grand champions of the sport, up to four at any given time. “Not here. This is a small stable with few well-known rikishi (wrestlers). There are no foreigners at this one either,” he adds.

It’s a recent discussion, but one that has prompted strong opinions from everyday Japanese citizens to sumo purists. The sport is being practiced by fewer and fewer native Japanese; Hawaiians and Samoans grabbed the top slots in the 90s while today’s champion hopefuls hail from far-off Belarus and western Russia.

The two reigning yokozuna, though known by Japanese names, are Mongolian. Critics of such international inclusion worry that their homegrown martial art will fall prey to overwhelming foreign influences.

However, sumo stables are  allowed to house only one foreigner at a time. Others see the injection of new blood as a chance to revive a flagging tradition. The verbal sparring drags on in many sumo circles, but here in the beya, politics matters not. It’s simply business as usual.

The trainees gather together for one final exercise, forming a human chain around the edge of the hard-packed ring. As they circle the practice area, I give these heavyweights a nod of admiration before quietly filing out.

Visiting a Tokyo sumo stable is free but often requires a Japanese “chaperone” or significant Japanese language abilities  to navigate the complicated relationship between guests and the stable master. The following stables welcome occasional visitors:

Always phone ahead to confirm your visit and you may consider bringing a small bottle of sake as a gift for the stable master.

Mandy Bartok is a freelance writer and language teacher living in Tokyo, Japan. Her work has previously appeared in Irish Roots magazine and Metropolis, Japan’s number one English language publication.

Overnight in an Earthship: Sustainable Voyage in Taos
Next Post: Béisbol: A Traveler’s Inside Look at Baseball in Cuba