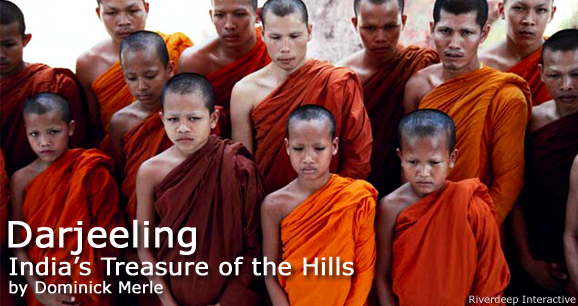 Ahhh…..the fireplace is roaring, a hot water pouch has heated my bed and I’ve just drawn the twin blankets up to my chin.

Oops! Forgot to make sure the windows are locked so the wild monkeys won’t jump in.  They’ve been known to slip into bed and snuggle up right next to you, some claim.

No, this is no daydream or wild hallucination. This is simply India. And India is never simple. By 10 a.m. tomorrow, I’ll be down to a T-shirt and flip-flops, drenched in sun block cream.

I’m in Darjeeling, the so-called queen of the Himalayas in northeast India. On a clear day, there is a magnificent panoramic view of the entire mountain range.  Just outside the city, at a spot called Tiger Hill, the tip of Mt. Everest can be seen in neighboring Nepal. The peak appears to be more a part of the sky than the Himalayas.

At more than 7,000 feet above sea level, Darjeeling can be so nippy at night that hot-water pouches have long been standard bed equipment.  Wild monkeys are also standard burglars and potential bedmates.

A sign in the room of my hotel, The Elgin, strongly advises guests to secure the windows at bedtime to keep out the furry invaders.

Besides the unequalled sweeping view of the entire Himalayan range, Darjeeling’s next claim to fame is tea, for which it is known worldwide.

There are more than 75 tea gardens surrounding the city, and the tea harvested here commands the highest rates at public auctions held each week in Calcutta and London before being exported throughout the globe.

The tea pickers are primarily women from Nepal, who earn less than $2 a day, a paltry fee but much more than they could earn in their own land.

Number three on Darjeeling’s tourist attractions is its 125-year-old “toy train,” a steam engine awarded UNESCO’s Heritage status, the only one accorded a vehicle. One can ride the train from here to Siliguri, about two hours south, as it chugs along at elevations ranging from 500 to 7,000 feet.

Construction of the narrow-gauge line was concluded in 1881.  Prior to that, Darjeeling’s only link to the rest of India was over a rugged mountain road.  The original steam engines are still in use, albeit at a leisurely pace, and snake through colorfully named spots like “Agony Point” and “Sensation Corner.”  Throughout the trip, the Himalayas serve as a dazzling background.

As with many cities, Darjeeling is perhaps best explored by walking. With a population of about 750,000, it has tripled in size since I last visited here 10 years ago.  However, the central square, called the Chowrasta, and the narrow winding roads leading down from it, haven’t changed much.

I stop at the very same bank where I exchanged money a decade ago, and have to sign what looks like the same musty blue ledger in several places before I can proceed to the next two cages upstairs and finally obtain my rupees.

Walking down the side streets I pass a number of familiar businesses and watch the sidewalk vendors (perhaps the same ones) switch their goods from wool caps and scarves in the early morning to sunglasses and sandals by noon.

All along the way are the “deliverymen” or “coolies” as they are known by the locals. A familiar sight throughout the Himalayas, they work as freelance couriers, carrying huge sacks of supplies on their backs.  They walk hunched over with the cloth handles of the sacks over their foreheads to ease the load. They are paid according to distance and weight.

Several monasteries are  on the outskirts of the city, including  the Yiga Choling Tibetan Monastery, built in 1875 and home of an enormous statue of the Buddha wearing a sublime expression.  Most Tibetan versions depict him in aggressive postures.

The name Darjeeling originated at the nearby Bhutia Busty Monastery. Early monks referred to the region as “Dorje-ling,” which translates loosely to land of the thunderbolt, and the name was eventually Anglicized to its present form.

While there are only about 5,000 Tibetans living in Darjeeling, their influence is strong, due mainly to the Tibetan Refugee Self Help Centre on the hill slopes north of the city.  It opened in 1959 after the exodus of the Dalai Lama and his followers from Tibet after the Chinese takeover.

Although the production of handicrafts is the main activity, the centre also trains artisans and operates an orphanage and infirmary for the aged.

There were only four workers when the centre began, but more than 750 refugees are there today, and 900–1200 have left to set up their own businesses in the Darjeeling area. American actor Richard Gere, a well-known supporter of Tibet, is a frequent visitor.

Back at the main square, the sun has set and the locals and visitors have left their benches for warmer climes.  The nighttime “winter” is not far off.  Time to fill the hot-water bags and seal the windows.

Dominick A. Merle is Canadian director of the International Food, Wine & Travel Writers Assn. and resides in Montréal, Quebec.  His travel articles have appeared in virtually every major newspaper in the U.S. and Canada.  He specializes in Asian destinations.