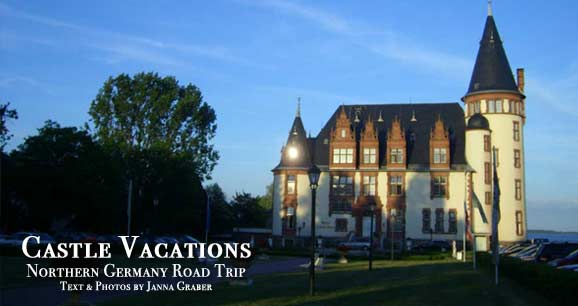 Time flies when you’re zooming down the autobahns of Germany. Actually, I’m the one who’s flying. The speedometer on the BMW 745i reads 160 km/h (100 mph) and climbing, yet the car is so solid it barely feels like I’m going 60 miles per hour.

Audis and other BMWs pass us like we’re standing still. Since there are still no speed limits on some lesser-frequented German roads and the highway is smooth, I let the BMW do what it does best, and push the pedal down a little more.

Thankfully, my mom, who is in the passenger seat, has her eyes on the scene outside the window and not on my speedometer. The landscape is postcard perfect. Fertile farmland, cut bare from harvest, stretches across the horizon. Massive farm equipment dots the fields, farmers out preparing the fields for next season’s crop.

Overhead, the sun burns bright in a clear blue sky. It’s a beautiful day to be in Germany — especially with this gem of a car.

Unfortunately, this engineering marvel isn’t mine. The BMW belongs to my German friend, Torsten, who has graciously loaned it to my mother and me for our girls’ road-trip adventure. But this road trip is different; we have no maps. The car’s navigation system is our only guide.

After giving us a quick lesson on the car in the northern city of Hamburg , Torsten had wished us luck and sent us on our way. The car’s smooth female voice, speaking in High German, guided us through the busy streets. Though I had to brush up on my vocabulary (the German I learned attending school in Austria came in handy!), we were out of the city in just 45 minutes.

Our plan now is a five-day tour across Mecklenburg-Vorpommern (Mecklenburg–Western Pomerania), a German state that once belonged to East Germany. We’ll stay at castle hotels along the way.

Though it’s the sixth largest state, Mecklenburg-West Pomerania has only 1.7 million residents. Bordering the Baltic Sea and with hundreds of inland lakes, the area is a popular destination for European tourists. Strangely though, few Americans make it to this part of the country. It’s my first visit to this region as well, and I’m beginning to wonder why I haven’t discovered it before now.

Our first stop is the town of Schwerin, population 96,500, about 70 miles (112 km) east of Hamburg. The capital of Mecklenburg–Western Pomerania, Schwerin is famous for its fairy-tale-like castle on an island in the middle of Lake Schwerin.

With its golden towers and tall turrets, Schwerin Castle fits my ideal of a perfect castle. Once the Grand Duchy of Mecklenburg-Schwerin, the castle was converted into a palace in the 16th and 17th centuries. Our guide takes us from room to room, providing tales of long-gone nobility. Our necks strain looking at ceiling paintings, and our American minds spin with centuries of history that had previously been unknown to us.

Dazed with information overload, we step back into real life with a stop for lunch at Zum Stadtkrug, a local brew pub. Hans-Ulrich Trosien, the brewmaster, takes a few moments to talk with us, explaining the intricacies of beer making and offering samples of his rich, dark ale. Full of hearty German food, we head back to our trusty BMW to head to a castle of our own … at least for a few days.

After a few false turns in the dark country night, we finally locate Schloss Basthorst, 20 minutes outside Schwerin at the end of a tree-lined dirt road. Like many of the castles in former East Germany, Schloss Basthorst suffered decades of neglect under communist rule. Today, however, it has been lovingly renovated as a boutique hotel.

With its red brick and open-timbered rooms and the elegant air of a grand old lady, Schloss Basthorst is more of a grand manor than a castle. My mom and I share the place with a small group of German businessmen. The evening is so beautiful that they ditch the meeting rooms and talk by candlelight in the back gardens, the soft sound of their laughter floating up to our windows in the cool night air.

The next morning we head for Wismar, a small town on the Baltic Sea. A UNESCO World Heritage site, Wismar was founded in the 1220s, and it became a Hanseatic town in 1259. In 1632, the Swedish army conquered Wismar. The region remained under Swedish control for about 150 years, which accounts for the Nordic look in some of the local people, the annual Schwedenfest (Sweden Festival) and some Swedish words still in use today.

I learn all of this and more from Guenther Faust and Dallas Reese, our guides for the day. While Dallas, an English ex-pat, and my mom explore the town, I follow Guenther, who tries his best to explain the town’s history in basic German I can understand.

We explore the Church of Mary, with its 262-foot-tall (80 m) tower, and then wander through the ruins of St. George, a cathedral that met its doom with American bombs; its restoration is due to be completed in 2010. But my favorite stop is at a local bakery. Since I’ve been craving German pastries since we got here, the four of us circle a small outdoor table, and chat and laugh as we down tortes and Berliner (German doughnuts).

It’s soon time to hit the road again. After driving for two hours, passing only farms and small towns, we come to Schlosshotel Gutshaus Ludorf. Built in 1698 in Danish brick renaissance style, the hotel has an enviable location on the west bank of the Müritz River. Once a dilapidated clinic, the manor has been carefully restored by Keril and Manfred Achtenhagen.

In the process, they’ve uncovered several treasures, including historic ceiling murals found under layers of paint. Each of the manor’s 23 rooms is different, some with open-beamed ceilings. As with many hotels in Germany, our overnight fee includes a full continental breakfast each morning. My mom is pleased to find that, like most Germans we’ve met so far, our hotel hosts converse comfortably in English.

Gutshaus Ludorfis is across from the Müritz Nature Reserve, nicknamed “land of a thousand waters,” because of the huge number of lakes in the region. We pass bikers, hikers and boaters during an afternoon walk through the area. From there, we explore the nearby village of Ludorf, which probably consists of no more than 50 buildings. At the heart of the community is a rare octagonal church dating from the 14 th century. It’s so small I can walk the length of the church in 20 strides.

Later in the day we head to Waren, a charming town that has recreated itself since its communist days. Brightly painted homes, trendy cafes and shops line the cobblestoned pedestrian zone. We stop for ice cream and eat it outside in the warm sun. Our server is an Albanian, who loves living in this part of Germany — and I can see why. Waren is a very walkable city, with just enough size to have everything one would need to live in comfort.

From there, it’s off to the town of Klink, just a 40-minute drive away, for some fun on Lake Müritz. Tokon Sports specializes in group adventures, but they kindly take us for a speedboat tour of the lake. The town along the shore looks so small from this perspective, and it’s a thrill to speed across the water.

Tokon’s staff is young, so they barely remember this region under communist times. They have a fresh, optimistic outlook on their homeland, and I can’t help but enjoy their company.

They drop us off at Schlosshotel Klink, a huge, dreamlike castle that has been turned into a spa and resort. This castle has a more commercial bent, with wedding and meeting facilities for big groups. We dine on fresh fish, looking over the lake from the castle deck. It’s easy to feel like royalty from this vantage point.

We spend our last day in Güstrow, a picturesque town of 31,000 on the River Nebel, just an hour or so away. Like most former East German towns, parts of it have been carefully restored and updated, while other buildings are dilapidated, still searching for owners with the courage and money to restore them.

We tour the town center and then visit the grand Palace Güstrow, a museum that requires much more than the hour we can spend there. Built in 1589 in renaissance style, the castle was a residence for the dukes of Mecklenburg . It fell into disrepair during war and communist times; restoration began in 1963, and was completed in 1981.

At the city’s cathedral, a brick Gothic church built between 1226 and 1335, the most-visited attraction is Schwebende Engel (Hovering Angel), created by expressionist sculptor Ernst Barlach in 1926 as a tribute to the victims of World War I.

Each time I visit Germany, I’m amazed by the changes — and this time is no exception. As my mom and I turn the car around to head back to Hamburg, we pass a lone German flag, perhaps 10 feet (3 m) in length, flying proudly from a window. The flag is a symbol that many countries take for granted, but Germans have always been cautious to display their love of country, for fear of dredging up its shameful Nazi past.

Yet it seems Germany has finally allowed itself to be proud of its hard-fought accomplishments — and what accomplishments they are. In the last few decades, they have brought two different countries and ideologies into one nation, the stronger half holding up the other until it could grow robust again on its own.

And having spent the last week visiting the towns of former East Germany and seeing this amazing progress first hand, I can’t help but be proud of their accomplishments, too.

Accidental Travel in China
Next Post: Humor: The Haberdasher of Hurghada