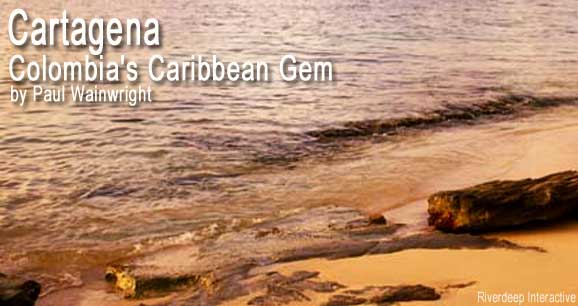 Imagine the high-rise skyline of the Australian Gold Coast. Imagine the bustling hive of activity of Thai beach resorts.

Imagine the architecture of Andalusia. What do you get when you mix them altogether? Surprisingly, a Caribbean beachside city in Colombia.

Cartagena, also known as Cartagena de Indias (Cartagena of the West Indies), is a sun-drenched city in the north of Colombia.

It has a history harking back to the era of pirates and Spanish colonialism, and a present that’s lively and diverse.

It is a combination of the laid-back South American mañana culture (everything will be done tomorrow, just you wait and see!) and the proud, fun-loving Colombian way of life.

Colombia as a travel destination isn’t everyone’s cup of coffee. South America’s second most-populous country, has a troubled past and a present plagued by bloody political conflicts, destabilizing guerrilla and paramilitary groups, mass kidnapping for ransom and powerful drug cartels.

It has an even worse reputation, and is perceived to offer only a few tourist attractions worth the risk. The United State’s Department of State warns of ongoing security concerns for travelers largely as a result of the illicit drug trade.

However, it is also stated that “violence has continued to decrease markedly in most urban areas, including Bogotá, Medellin, Barranquilla and Cartagena.”

Since President Álvaro Uribe took office in 2002, his hardline approach called “democratic security” has notably increased Colombia’s stability and security by significantly boosting its military strength and police presence throughout the country.

Due to the improved security, cruise ships are expected to return to the seaport of Cartagena in the fall of 2007.

Travelers can experience summer, winter, autumn and spring at the same time, depending on their location. The Caribbean coastal lowlands in the tropical north are always hot.

The mountainous region of the Sierra Nevada de Santa Marta, at an elevation of 18,700 feet (5,700 m) above sea level — and a mere 26 miles (42 km) from the coastline — boasts an alpine climate with cool temperatures, typically in the mid-50s or below.

Stepping off the plane in tropical Cartagena though, the heat hits like the shots from colonial cannons as you wonder why you left the stable fall weather of Bogotá to be here.

It only takes the 10-minute drive from Rafael Núñez International Airport, in the neighborhood of Crespo, to the old part of the city, also called Walled City or Corralito de Piedra, to realize the answer:

Mounted cannons on one side, the turquoise-blue Caribbean sea on the other, and straight ahead a horizon filled with apartment buildings that wouldn’t look out of place in the opening of the popular TV show CSI: Miami.

It’s Cartagena’s diversity — physically, ethnically and historically — that fascinates the visitor and may also be the reason why Colombian writer and Nobel Prize – winner Gabriel García Márquez chose the port city as a setting for his celebrated novel Love in the Time of Cholera (1985).

There are two main areas to stay in Cartagena, depending on the number of pesos in one’s wallet and the preference for history or beaches.

Bocagrande (Big Mouth) is the city’s most modern area, with a plethora of restaurants, hotels, apartment blocks, nightclubs and even a casino.

The hotel zone never sleeps. Walk Avenida San Martín, the backbone of the area, at night to witness a bus full of merry intoxicated tourists meandering past, the latest Shakira song blaring from its speakers on a night tour of the city.

The beach in Bocagrande is one of Colombia’s most-visited tourist destinations, and covered with more salespeople per square foot than I’ve seen any other place. Vendors will stop by continually with a variety of foods and drinks.

Days can be spent here, sipping on Colombian beer or fresh juice, eating traditional Colombian fare like arepas (a flat cornmeal cake grilled, baked or fried and often split in half and stuffed with cheese, egg or anything you please), or simply just enjoying the weather and the sea.

But the true crown in Cartagena is the Walled City. Cartagena was founded in 1533 by Pedro de Heredia, a Spanish conqueror forced to leave Spain after killing three noblemen in a brawl.

The city gained importance as a port when the Spanish used Cartagena as a stop-over on their way to Cuba before continuing on to Spain.

The ships were filled with pillaged riches transported to Cartagena on the Río Magdalena, a 950-mile-long (1,540 km) river that runs deep into the interior of Colombia.

In the 17th century, Cartagena was also a slave port, where workers were bought and sold for work in mines.

It was the combination of these two factors that allowed the city to grow and prosper, and led to the architectural beauty that prevails to this day.

Entirely surrounded by walls and just a stone’s throw from the water, Cartagena has the most extensive fortifications in South America.

The UNESCO World Heritage site of the Walled City contains three major neighborhoods: San Pedro, with the cathedral and many Andalusian-style palaces; San Diego, where many merchants and the middle class lived; and Getsemani, the neighborhood for the common people.

The architecture in the old center is mainly colonial style, but there are also republican- and Italian-style buildings here, such as the bell tower of Cartagena’s cathedral, for example.

Some of the two-or three-storey houses boast enormous wooden doors, and many have beautiful colonial-style balconies with flowering vines hanging over their sides.

Only certain parts of the Walled City are accessible to cars. The sound of horse hoofs (pulling carts) on the cobbled roads serves as a colonial-style horn.

In Cartagena’s historical heart, the various plazas, such as Plaza de Bolívar or Plaza Santo Domingo, are great places to have a cold drink and soak up the atmosphere.

Just next to the latter is a church with the same name; Santa Domingo has a domed roof and various murals. Don’t miss the luxury Sofitel Santa Clara Hotel, a renovated 17th-century Clarisse convent.

To cap it off, have a drink at El Mirador, a rooftop bar off Plaza Santo Domingo, with a magnificent view of Bocagrande’s skyscrapers, the glistening Caribbean sea and the Walled City.

Cartagena ’s beauty, much like the rest of Colombia’s, lies in its history and its diversity. Now if you could only get off that beach …