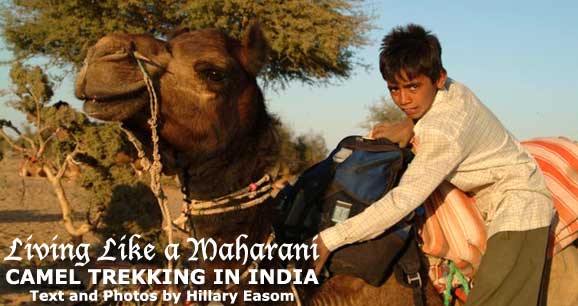 I awoke just after dawn and found that I was only slightlysaddle sore, despite five hours of riding a camel the previous day. A night’s sleep on a plush bedroll under the desert stars was all I had needed to recover. I rolled over and squeezed the pillow to my chest as Juju walked up. “Good morning, Madam,” sang the 12-year-old. “Chai?” I could never resist the warm, sweet and spicy Indian tea. I sat up and reached for the cup. “Thank you, Juju.”

“Welcome, Madam,” he responded with a toothy grin, before returning to the fire, where our breakfast was being prepared.

“Maharani! Good morning!” It was Sham Singh, our guide and chef extraordinaire. He had taken to calling me maharani, which means “queen.” I grinned and bid him good morning.

My husband and I were on a three-day desert camel safari from the western India town of Jaisalmer, which cost 750 rupees apiece (US$ 17). We’d opted for the top-tier excursion package: plush bedrolls, rather than simple sleeping bags, and higher quality meals, rather than just lentils and rice. The daily rate was barely $5 more than the cheaper package. For the meager increase in price, treating ourselves like royalty was a no-brainer.

The sun was quickly warming the sand around us; this would be another hot day. After chapatis and vegetables, Sham helped my husband tie his turban, and I affixed my head scarf to protect myself from the desert heat. We slathered on sunscreen and prepared to mount our camels once again.

I had developed quite an affinity for Khalu, my trusty camel, which was gentle, intelligent and affectionate. I petted Khalu’s neck as he hunkered down for me to climb onto his back. We rode for about an hour before stopping at a small desert village. Immediately, swarms of children raced up to our camels.

“Hello,” the older ones shouted, practicing the one English word they knew. An elderly woman holding a toddler on her hip nearby. I reached out my arms, asking if I could hold the little girl. She passed her to me, and then waved her arms, as if indicating that I should take the child home to my country. Alarmed, I shook my head. I tried to communicate that, although the girl was beautiful, this was her home.

I heard faint music, and wandered off to find its origin. A man and his son were playing simple string instruments in front of their home. They welcomed me, though I shook my head when invited to dance. Other villagers soon joined us, and we reveled in the music, a common language.

Soon Sham arrived and told me it was time to go. We climbed back onto our camels, waved goodbye and carried on through the desert. We were very close to Pakistan, and Sham explained that these villagers were Pakistani refugees, and the adults wanted their children to have a better life.

Our entourage stopped for lunch before noon. While we waited for the meal to be prepared, Juju laid a blanket under a tree, and my husband and I enjoyed a brief nap. Sham amazed us again with his culinary skills. Cooking over three rocks on a fire made from camel dung, he crafted a meal of curry, rice and chapatis that was better than any I’d eaten in a restaurant.

Juju’s smile was especially bright this afternoon. We were going to visit his home. Sham explained that Juju’s family was eager for him to learn guide skills. He’d been sent to work as an apprentice, in the hope that he would become qualified to lead camel safaris on his own in a few years. Now, Sham mostly worked with him on his English language skills, etiquette and setting up camp. Juju was an enthusiastic student.

“Yes, Maharani,” Sham said, “it is important for him to treat guests with respect.” I assured him that we had never received such impeccable service — both he and Juju were wonderful guides and travel companions.

We rode up to Juju’s house in the mid afternoon. After greeting her oldest son, his mother stood shyly with Juju’s nine brothers and sisters and his father, waiting for our introduction. Several of the children had open cuts on their faces and legs, and flies hovered around them. Each had the same radiant grin as his or her 12-year-old brother.

After a visit and a tour of the family’s simple, but tidy sand-and-clay home, it was time to continue, and we said goodbye. Juju wasn’t sure when he would see his family again.

The camels galumphed through the desert for another hour or so before we stopped to make camp for the night. Sham built a fire for dinner. As Juju untied our belongings from the animals’ backs and prepared to set up our bedrolls, I tried to remember being 12 years old. No matter how hard I tried, I couldn’t imagine having been away from my family for indefinite periods of time. But here this was viewed as a special opportunity, an honor. Twelve was not a child anymore. Twelve was becoming a man.

“Chai, Madam?” My young friend handed me a cup of tea, and I savored the spicy aroma before taking my first sip. “Welcome, Madam.”

A couple of hours and yet another magical dung-cooked meal later, we were all seated around the fire. My husband was teaching Juju some English words. He drew pictures in his journal then said the words aloud. The boy was diligently repeating the sounds and translating them for us into his language.

The sun went down, and the desert air cooled. Despite gobs of lotion, my face was sun-kissed, and I felt a chill. It was time to crawl into my bedroll. As I settled in for one last night under the desert stars, I felt grateful to have had this opportunity, to meet these resourceful desert people and to have seen their way of life. A star fell in the sky. I pulled the covers up to my chin and closed my eyes, ready to dream the dreams of a maharani.