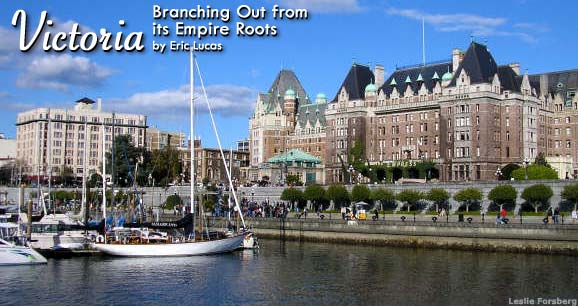 The alley’s so narrow that only a rumor of sun reaches past the two-story warehouses that frame it. Along the lane, oddment shops sell phonograph records, herbal tinctures, bead necklaces, antique handiworks. You can reach your hands to each side of the passageway and brush the old brick walls.

When you step out into the sunny street you’re in Chinatown. Wood-box stands offer piled bundles of daikon (a white radish of Japan), ginger, dried cuttlefish and bok choy. Blue Pacific sky paints the horizon. Cantonese phrases clatter like marbles rolled against each other. “Dim sum lunch every day,” promises a sign above the entrance to Don Mee’s.

It’s early afternoon in Victoria, B.C., dim sum is our goal, and Don Mee’s is reputedly the best in town. Loosely translated as “little treats,” dim sum are indeed that, small plates of dumplings and other delights from which, given a half-dozen, two diners can make a lunch that practically demands a postprandial nap.

Up the stairs we stride — lollygagging is not wise if you want a table at a dim sum shrine — to enter an elegant hubbub of serious gustation. Green walls, brass trim and porcelain adornments temper the clack of platters and chopsticks, the familial ebb and flow of conversation.

We start with shrimp dumplings, the hamburgers of dim sum, and venture onward to taro rolls, spiced wide noodles, shrimp-and-crab cakes. It’s the best dim sum lunch I’ve had since my last trip to Hong Kong, and it reminds me why Victoria is such a wonderfully diverse and culturally flavorful place to visit.

Yes, that Victoria. Capital of British Columbia, Canada. Former outpost of the British Empire. Perched around one of the world’s best harbors at the southeastern tip of Vancouver Island, the largest island on the western side of North America. Home of neo-English parliament buildings (called so even though it’s the B.C. Legislature that uses them) and afternoon tea ceremonies in quaint Victorian parlors.

Though the notion is far from reality, the city still hasn’t shed its Beefeater-and-lace public persona. You can blame Rudyard Kipling for this.

It was Kipling who, after visiting Victoria around 1908, when he was probably the world’s most famous English writer, called it a Little Bit of Old England. “Amongst all the beautiful places in the world, and I think I have seen the most beautiful of them, Victoria ranks the highest,” he gushed. Woe betides those who have an identity stuck on them by a global celebrity!

Although it has a dozen other equally valid (and more genuine) personalities and the city stopped marketing its quasi-Brit character a decade ago, most visitors still come to town expecting scones and jam on doily-clad silver salvers.

But there’s plenty to be said for old Empire sensibilities. At Abigail’s, a marvelously deluxe neo-Tudor inn that’s just a few blocks from the waterfront, the two honeymoon suites include dumbwaiters from which couples can extract their breakfasts without joining the relatively refined hurly-burly of breakfast in the first-floor parlor. Yes, you get scones at breakfast. You can also have cider-and-gouda scalloped potatoes and breakfast lasagna.

Some of Victoria’s other identities:

Progressive culinary capital: Not only is it a dining mecca (with more restaurants per capita than any other city in Canada, supposedly), it’s one of the world’s centers for slow food, the term that embraces production and enjoyment of local, sustainable agriculture, fisheries and cooking. The Vancouver Island Chefs Collaborative was formed a decade ago by innovative restaurateurs to create a market for regional foodstuffs.

Horticultural haven: Everyone knows about Butchart Gardens, a highly stylized formal layout in a former rock quarry that’s among the most famous gardens on earth. But there are dozens of others, ranging from a quiet, low-key native plant sanctuary in the sedate Oak Bay neighborhood, to modest rose gardens at Government House, where the royal family stays when members are in town.

Biking center: You can pick up a bike just blocks from downtown and pedal 40 miles (64 km) west on an old railroad grade to the foothills near Sooke. On a hot summer day, the Sooke River is a great place for a plunge into deep emerald pools.

Oenological hotspot: Two areas north of the city, the Cowichan Valley and Saanich Peninsula, are the newest wine districts in Canada, offering not only cold-climate wines, but blackberry, kiwi, quince and pear versions.

Asian cultural center: Chinese (Mandarin and Cantonese), Indian, Pakistani and Japanese influences abound. Though small, just two blocks, Victoria’s Chinatown is a colorful, bustling district with most of the virtues of its larger cousins in Vancouver and San Francisco.

Yes, I’ve had afternoon tea in Victoria. Rather than dally for tea at the venerable Fairmont Empress Hotel, however, I prefer to get out and walk the city’s core, which wraps around one of the world’s best harbors, facing south into the sun toward the snow-clad ramparts of the Olympic Range across the water and the U.S./Canada border, in the state of Washington. The city was recently declared the best in Canada for walking, and that’s just what we’re doing today.

We start on Government Street, dipping into the shops nearest the Empress that reflect Empire heritage, checking out wool capes and sweaters at Irish Linens; then stepping a few doors away into Murchie’s, a venerable tea purveyor that may be the only place on the West Coast you can buy a tea at CAD $200/pound (US$ 174). James Bay Traders devotes itself to Canadian goods, with fur trader–style blankets and Native-influenced clothing that’s reasonably genuine.

A few blocks farther is Chinatown, and after lunch at Don Mee’s we pause at Silk Road, a hip tea-and-emollients purveyor where they blend such unlikely combos as ginger, grapefruit, lemongrass, vetiver and coriander into an oil whose name, Energy, is inarguably appropriate.

My favorite part of central Victoria, though, is Fort Street, a shopping district that angles north out of the harbor area. It’s an antique row where you can browse among as many silver sets, lace tablecloths, overstuffed chairs and leather-bound books as an old empire might cast high on a harbor shore. Each chock-a-block bric-a-brac outlet might well require a spousal consent statement before selling anything to lone travelers; luckily, neither I nor my wife Leslie is dying to have a silverplate set of soft-boiled-egg knives.

The more modern stores on Fort exert a stronger draw on me. I’ve not before seen a last manuscript by Raymond Chandler that was published a few years back in a classics series. Playback isn’t up to the rest of Chandler, Frances Thorsen tells me, but that’s like saying Beethoven’s Eighth isn’t up to his Seventh or Ninth.

“It’s still Chandler. It’s still better than most anything written today,” she avers.

Thorsen ought to know; she’s the proprietor of Chronicles in Crime, the best mystery book shop I’ve ever been in. Her many hundreds of titles are arranged by sub-genres that make sense only to avid thriller readers: “Male private eye.” Leslie rolls her eyes, but I check the titles to see if Thorsen has sorted accurately, which she has.

Across the street, at Revive, a used kitchenware store, Leslie lingers over a few things that make more sense to her than to me: A 50-year-old flour sifter that is not only antique but more serviceable than modern ones; its hand-turned crank does a better job of moving the flour through the sieve.

I didn’t know that.

“Travel broadens your mind,” she tells me, sweetly, over afternoon revival at a Serious Coffee outlet two doors down.

That night we stroll through old Victoria — Bastion Square, whose name and bulwark stonework stolidly evoke empire — to dinner at an outpost of the city’s new character. Camille’s is new-clasped-within-old, a cozy warren of small dining rooms in a Bastion Square cellar. One of the pioneers of the city’s new cuisine/slow food philosophy, Camille’s has for 15 years melded traditional Vancouver Island foods with innovative approaches that blend European and Asian influences.

Its signature appetizer is a bisque of shellfish, ginger and togarashi (a hot red pepper used as a spice) oil; each spoonful is rich enough to send to the bank. The pork tenderloin comes with a black cumin seed jus; and the free-range venison has a fig glaze and fruit/almond/sausage bread pudding for starch.

Every dinner, Leslie believes, needs a starch, a point of view that would have been utterly familiar to an old Empire cook. Luckily, in Victoria, I can dine within a new tradition that incorporates what’s best of an older one. The venison is delightfully tender, its strong flavor braced by the fig glaze. The bread pudding has as much texture and flavor as a stew. And there’s not a bit of Victorian lace in sight.

Austrian Air: Skydiving in the Alps
Next Post: The Vinho Verde Route: Wine-Tasting in Northern Portugal