Mention Panama and most people think Panama Canal. There is no doubt that the 50-mile-long (80 km) canal that cuts across Panama from the Atlantic to the Pacific, completed in 1914, is one of the most spectacular feats of modern engineering. Any visitor to Panama should do at least a partial transit of the canal or a visit to Miraflores Locks to see the locks in operation.

Panama offers so much more, however: tropical rainforests for wildlife and bird viewing; beaches and islands for relaxing like Bocas del Toro; and mountain villages for hiking. Panama City, located on the Pacific, has excellent hotels, good dining, a few good museums and two wonderful historic areas, La Vieja and Casco Viejo, both rich in remnants from Panama’s colonial past.

The older of these two sections is Panama la Vieja (the old one), located at the eastern edge of Panama City. Founded in 1519 by the Spanish conquistador Pedro Arias de Ávila, Panama la Vieja — the original Panama City — grew quickly to become one of Spain’s most important cities in the Americas.

With its prime location on the Pacific, it served as a conduit for the gold and silver flowing from the mines of Peru and Bolivia that was shipped here, then carried across the isthmus of Panama to Caribbean ports, and then by ship to Spain.

Panama la Vieja had a royal treasury, cathedral, eight convents and monasteries, churches, hundreds of warehouses and scores of elegant mansions, as well as thousands of humbler dwellings. Over 150 years the city grew and prospered, with its population reaching an estimated 30,000 by the middle of the 17th century.

Everything came to an abrupt halt in 1671 when British pirate Henry Morgan and more than a thousand of his cohorts attacked the city, routing the Spanish soldiers defending it, then pillaged and looted the city. A fire completed the devastation. La Vieja was abandoned and left unprotected, in ruins, for more than 300 years. It was only in 1976 that what was left of this colonial capital became a protected historic site. It was declared a UNESCO World Heritage site in 2003.

Some of La Vieja’s most important buildings, the Casas Reales (royal houses), including the royal treasury, customs house, and governor’s mansion, were on a small peninsula separated from the rest of the city by a moat. Today they have all but vanished, except for a few stone walls and foundations.

Nearby, on the other side of the moat, the Plaza Mayor (Main Square) is still visible today, as are substantial portions of other buildings: the impressive Cabildo de la Ciudad (City Hall), the equally impressive Metropolitan Cathedral with its bell tower, the bishop’s residence, several large mansions and the enormous late-16th century complex of the Dominican Order.

West of Plaza Mayor stands the ruins of many of La Vieja’s 16th- and 17th-century monasteries and convents, shoulder-to-shoulder, facing the sea: the Jesuits, the Franciscans, the Mercedarian Friars, Our Lady of the Conception.

There is a superb small museum at the west end of the archaeological site, a 15-minute stroll from Plaza Mayor. Admission is US $3 for a visit to the enclosed portions of La Vieja, including the museum.

After Henry Morgan’s destruction of the original Panama City, the decision was made to rebuild five miles (8 km) southwest on a peninsula, which was more defensible. The new settlement, Casco Viejo (Old Quarter), was enclosed within sturdy stone walls defended by cannons.

Today visitors to this second Panama City can walk along the top of the stone wall to see ships line up in the distance, waiting to enter the Panama Canal. 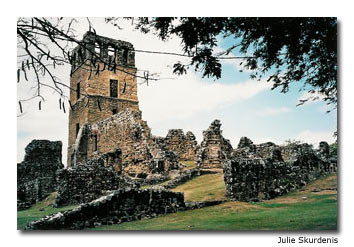 At the base of the wall, in the Plaza Francia, are plaques with the story of the canal and the thousands who died of malaria or yellow fever during its construction. Nearby are stone vaulted dungeons once used by the Spaniards, now housing art galleries and an excellent restaurant, Las Bovedas, appropriately named “the vaults.”

Casco Viejo is a place to stroll through slowly. It’s a relatively small area, and you can see much in just an hour or two. Many of the old colonial buildings are crumbling, although restoration seems to be gathering speed.

Historic parks are interspersed among streets lined with colonial buildings. Parque Bolivar is near where revolutionary liberator Simón Bolívar organized the Congress of Panama in 1826 as he attempted to forge a union of Latin American countries, and Plaza de la Independencia is where Panama declared its independence from Colombia in 1903. Overlooking Panama Bay is the beautiful white presidential palace, Palacio de la Garza (palace of the herons).

The Museo de Arte Religioso Colonial is housed in a chapel of the ruined Church of Santo Domingo, and the Museo Antropológico, located just outside the Casco Viejo section, about a half-mile (.8 km) north, features splendid, well-displayed pre-Columbian statues.

We stayed at the InterContinental Miramar Panama, a high-rise overlooking Panama Bay. The rooms are spacious, with floor-to-ceiling windows. There’s a fabulous bayside pool and an outstanding restaurant overlooking pool and bay.

Be cautious when strolling through Casco Viejo, even during the day (leave valuables in your hotel safe), and avoid strolling at night. Don’t miss the chance of dining at Las Bovedas restaurant, but arrive and leave by taxi.