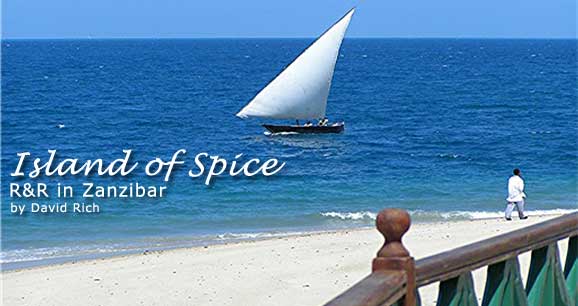 It’d been the trip from hell, stuck for two weeks with an incompetent sociopath punishing his passengers and beat-up Land Rover from South Africa overland through Zimbabwe, Zambia and Malawi, into Tanzania.

By now I was stark raving tired of waiting eight hours between meals and dodging ambling highway hippos after dark in torrential rains.

I had found Mr. Strange (his actual name; I should have known …) over the Internet. The former Baptist minister who looked like actor Leslie Nielson was traveling with his two adult kids from South Africa to Kenya.

I got along famously with his offspring, and pre-paid for the ride after meeting with them because the father seemed quite all right at the time as well.

Then we hit the road and he revealed his true self. When we arrived in Dar es Salaam I grabbed the chance and left our too-strange driver behind, jumping on the ferry to Zanzibar, hoping for some solitary R&R.

The word Zanzibar is magical, but how does reality compare?

Picture an exotic, remote and largely unknown island of spice, the tail that wagged the dog of a vast continent for centuries.

The stronghold of sultans and the central shipping-off point for Africa’s infamous slave trade from 1822 through the 1880s.

The Party Central of East Africa

Today, Zanzibar (in the local dialect of Swahili known as Unguja) has morphed into East Africa’s party central.

With its fine white beaches fronting a paradise for snorkeling and diving, picturesque sailing dhows and atmospheric architecture with a genuine African flair.

After ping-ponging between colonial powers during the Great Wars, Zanzibar and Tanganyika finally grabbed independence in 1964 and merged to become Tanzania (the name is a composite of Tanganyika and Zanzibar).

Today, Zanzibar is an autonomic part of the Tanzanian union, and actually consists of two islands.

As the ferry scraped the dock, a Rastafarian guy buttonholed me, introduced himself as Boniface, and asked what hotel I was off to.

Right away I saw a scam coming, the sort of tout that leaches on tourists worldwide. Yet I was leery of awakening a sleeping sociopath, so I answered kindly, “The Haven,” pointing to the guidebook entry.

Boniface did a double take. “That’s my hotel,” he said. “I run it.” “Get out of here,” I said. Boniface looked twenty-something and raggedy, and I hoped he’d take my request seriously.

But then a tout never accepts the hotel you pick, instead, steering you to the one offering him a kickback gratuity.

“Serious, man. I’ll give you a ride over. And if you don’t like it, though you picked it out, I’ll find you another hotel. Here are the guys riding with me.”

He introduced me to Joey and Justin, Americans serving the Peace Corps in Zambia, teaching the locals to plant fruit orchards for self sufficiency. Justin said, “Nothing like R&R in Zanzibar.”

I didn’t like The Haven and, sure enough, Boniface found me another hotel.

I felt welcome in Zanzibar, with R&R instantly seeping into my veins.

R&R was everyone’s story as they frittered away sultry holidays kicking back in the island’s cosmopolitan capital, Zanzibar City.

With its world-famous old quarter called Stone Town, and soaking up rays on the endless pristine beaches.

I took a more proactive approach, giddy on being AWOL from a certifiable nut case.

I explored the labyrinth of Stone Town’s narrow, winding alleys overhung by balconies; investigated the colorful bazaars; took the famous spice tour raved about in all the guide books; and glanced at a couple of beaches and coral reefs.

Zanzibar City (population about 160,000) is a World Heritage Site with ancient Moorish buildings dating back to the 1100s.

Arab traders began swooping down the African coast in the 8th century, riding the northerly winds for thousands of kilometers in billowing dhows.

A Little History Of Zanzibar

Zanzibar was officially founded as a Portuguese trading depot in the 16th century.

It remained fairly insignificant for the next 300 years, until the Sultan of Oman decided to move his court from Muscat, Oman, to Zanzibar in 1832.

The Arab influence grew steadily, and the strategically important island flourished to become a major center of the East African ivory and slave trade.

United States, British and German trading vessels visited regularly. It is estimated that between 6,000 and 10,000 slaves were traded daily in the early 1800s.

I wandered over to Creek Road, bisecting Stone Town. To the east of the road sit brutal stone blocks with rusty eye rings for tethering human merchandise.

The main slave market was a few blocks to the west, crammed between a massive stone church and a multi-pointed mosque.

I immediately became lost in alleyways of crocodilian crookedness.

So I wandered aimlessly, under jutting balconies and past innumerable displays of African arts and crafts, finally happening upon a crenellated Portuguese fort (known as “Old Fort”) with the remnants of an old chapel inside dating back to the 1550s.

Next door to the fort I entered Zanzibar’s tallest building, Beit el Ajaib, a very large, square-shaped building with several stories, surrounded by tiers of pillars and balconies and adorned with a large clock tower.

It was originally constructed in 1883 as a ceremonial palace, but was renamed the House of Wonders, as it was the city’s first building to have electricity and an elevator.

The House of Wonders hosts Zanzibar’s museum, which is worth the US$ 3 admission for its meticulous history of Zanzibar and fourth-floor veranda offering a 360-degree panorama over Stone Town.

I spent half an hour circling the veranda, trying to pinpoint the many places where I’d already gotten lost.

Also worth a visit is the Palace Museum, originally called the Sultan’s Palace; it was built in the late 1890s as a residence for members of the royal family.

There are also several mosques to visit, an Arab fort, and Anglican and Roman Catholic cathedrals.

On the seafront sits Mercury’s Pub, named after Freddy, a Zanzibar native who never returned after founding what for many is the greatest rock band of the 1980s.

I enjoyed Mercury Pub’s live acts, such as the Cultural Musical Club, a band featuring Zanzibar’s own music fueled by violins, a bass, harpsi keyboard and accordion. (Zanzibar was briefly a German colony.)

My Evening At Zanzibar

Every evening at sundown I’d gather with a hundred others to sample the skewers of a half-dozen fish varieties, squid, prawn and lobster sold from little barbeque stands on the waterfront off Stone Town’s Jamaturi Gardens.

It was a fabulous feast for a few bucks, easily topped off with gelato or watermelon.

I had both while admiring the sunset with silhouetted dhows.

Then I’d wander over to the former British Club, transformed into the venerable Africa House Hotel, for post-sunset toasts with new friends. Then we’d retire next door for jazz at La Fenice.

Photography for a Day

Don’t miss the spice tour, the cheapest kick on the island: eight hours for US$ 10, including lunch and all the raw spices you can ingest.

I tasted vanilla, clove, mace, cocoa, cinnamon, five kinds of pepper and turmeric, and could have done with a toothbrush before lunch.

An interesting part of the tour was being the only male surrounded by female tourists from South Africa, Germany, Finland, the UK and the United States.

The week fled fast, with impromptu parties and sunset reveries. Far too soon I stepped off the ferry in Dar es Salaam.

And there on the shore, waiting for me and the last leg of my prepaid trip, was the madman from South Africa, who instantly banished, at least for the time, my fond memories of the idyllic R&R in Zanzibar.

Dar es Salaam is the aviation capitol of Tanzania, receiving direct flights from most European capitals with connections from the United States. Ferry tickets to Zanzibar cost US$ 30 to US$ 40 each way for foreigners, depending on the ferry line and the hawker selling tickets.

Hotels on Zanzibar range from superb to ratty. The superb include the Zanzibar Serena Inn, overlooking the sea. I liked the landmark Tembo House Hotel, located on the seafront in Stone Town. Also to recommend is the Zanzibar Beach Resort and the Dhow Palace Hotel, which was particularly lovely, with large rooms, antique furniture, fridge and all the accoutrements.

All hotels can be booked and prepaid over the Internet at about 50 percent of the published rates.

A Visit to Sweden’s ICEHOTEL
Next Post: A Time for Healing: Thailand’s Elephant Sanctuary