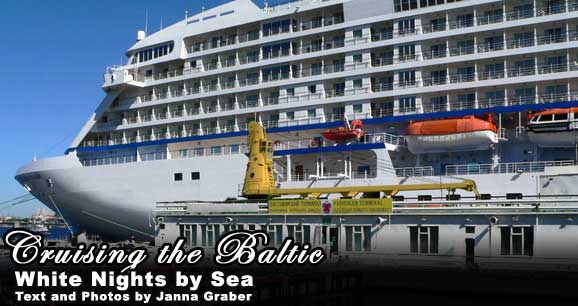 Leaning over the rail of my balcony on Deck 10, I can just make out the images of three men across the Neva River. They are dressed in dark blue coveralls and sitting on wooden crates along the dock, laughing and having a smoke. Perhaps they are taking a break from their jobs in the shipyard. Or maybe they simply want to enjoy this beautiful summer night in St. Petersburg.

And who can blame them? Behind them, the late evening sun casts a soft glow across the grand domes and gold spires of St. Petersburg, a sharp contrast to the gray, well-worn colors of the shipyard. The air is warm, and I can hear the tinny sounds of traffic even from here on the ship.

With the sky still so light, it’s hard to believe that it’s 11 p.m. But this is the “Land of White Nights.” During summer, the sun never fully sets in this Russian city. Instead, a warm pink and blue hue fills the heavens during the deepest night hours.

I could be asleep in my comfortable suite on the Radisson Seven Seas Voyager. My stateroom is spacious and elegant, with all the comforts of home. But who can snooze when there is so much to see?

Our mid-sized ship is docked in the deep channels of the Neva River inside the town once known as Leningrad. Home to 5 million people, St. Petersburg is a major cosmopolitan city — yet it’s unlike any town I’ve ever seen before. A past filled with dichotomies has left its mark on every street corner, from the over-the-top grandeur of Peter the Great’s palatial residences to the simple, worn buildings of the communist era.

From my deck, I have an excellent view of this land that my country, the United States, once feared. And strangely, up close, it doesn’t look so intimidating.

Just down the river, there are two submarines and a navy ship, relics from Soviet glory days. Russia has no money for new war machines now, so the country makes do with whatever it has, repairing and reusing what it can.

Beyond the subs, dozens of shipyard cranes stand like praying mantises, ready to load and unload the huge barges that cruise up the river each night. St. Petersburg’s location on the delta of the Neva has made it a shipping mecca for centuries. A labyrinth of waterways and canals wind their way through the city.

St. Petersburg’s many bridges rise each night to allow large vessels deeper into the bowels of the region. I watch from my perch as a cargo vessel from Moldavia, piled high with containers carrying who knows what, glides silently past us. A commercial vessel from Finland follows, and then a tall ship from Italy continues the parade. The line goes on and on under the ghostly haze of the White Nights, and I have a front row seat to it all.

The Midnight Sun is just part of the allure of this region of Russia. Some visitors are drawn by the country’s grand past — the history of czars and enormous palaces. Others come for the arts and outstanding ballet. As for me, I am simply curious. I want to see the land that I’ve heard so much about.

Our ship will dock in the Neva River for three days, offering a convenient base to explore the city. Three days is not much time, but my sister, Debbie, and I jump into full exploration mode, trying to get underneath the thick skin that is Russia.

It’s not an easy place to understand. The language barrier is real: Few tourists speak Russian, and many Russians speak only their native tongue. Many of the locals don’t seem to know what to make of the thousands of foreigners who now visit each year. Though I smile at the vendors I buy from, many look away shyly or ignore me completely.

Yet things change, even in Russia. The last decade has brought enormous transformation — from a new market economy to a broadened world view. Evidence of that change is everywhere. Expensive Western clothes stores and trendy cafés line Nevsky Prospect, the city’s main drag, and BMWs share the road with Russian-made Ladas. There are Disney movies sold in the subway stations, and Internet cafés are a common thing.

It seems, at least to me, that these are unique times in St. Petersburg’s history — a time when the town is caught in flux between what it once was and what it will very soon become. And though progress is good, I’m glad to be viewing this Russian jewel now, before some of St. Petersburg’s flavor melds into the global culture of today.

Several cruise lines understand the treasures that lie in the Baltics. Radisson Seven Seas Cruises is one of them. The small luxury line offers itineraries that veer off the beaten path to stop at the often-missed ports of the Baltic nations.

Our cruise sailed from Stockholm, a gem of a city with numerous merits. Fom here in St. Petersburg, it will continue on to Helsinki and Copenhagen. But the two ports that have truly caught my eye have been Tallinn, Estonia (see our Tallinn feature in the September 2005 issue) and St. Petersburg, two once-ignored cities that are just now being discovered by travelers worldwide.

Our ship offers an excellent base for exploring these destinations. During the day, we discover each new port, and then retreat back to the comfort and familiarity of our onboard home. There’s no hassle of moving to a new hotel or worry about finding a place to eat. (In fact, the cuisine onboard is outstanding!)

Admittedly, such brief stops can’t offer a deep understanding of any destination. Rather, the visits are vignettes of life in each port — an afternoon at a cozy coffeehouse in Sweden, a shopping trip in the rain in Helsinki or a two-minute conversation, using only hand gestures, with a smiling fruit vendor in Russia.

For me, these short encounters offer a taste of each location, whetting my appetite to come back later for more. St. Petersburg is no exception.

My sister and I want to see all we can of this Russian city, so we sign up for several tours. I’m usually not into group tours, mind you, but in Russia, they’re a god-send.

Those who want to see the city on their own must purchase an expensive visa for independent travel. If you choose an approved tour — in our case, Radisson Seven Seas had everything arranged — then that requirement is waived.

We’re pleased to find that our St. Petersburg guides are some of the best we’ve seen. They are honest and knowledgeable, answering questions from their own personal perspectives. Best of all, they know their city and people, and offer insight we would have otherwise missed.

We trek to some of St. Petersburg’s most famous sites — the Hermitage (the largest art museum in Russia), Peterhof (the opulent palace of Peter the Great) and the onion-shaped domes of Spilled Blood Cathedral.

But my favorite tour is one that simply shows us daily life in St. Petersburg. We venture deep into the corridors of the crowded subway system, getting jammed into the cars like everyone else, and go shopping along Nevsky Prospect. We learn about vodka from the small, yet well done Vodka Museum, and then shop for fruit at a local farmer’s market.

Our whirlwind three days doesn’t give me a definitive sense of St. Petersburg. Instead, it only raises more questions. But I’ve had a sample of this Russian town, and I know now what I will return for.

A cruise ship never stays in one place for long, though, and soon enough we are following other vessels as they tiptoe through the Neva River, past the shipyards and back out to sea.

The Gulf of Finland is as smooth as glass when we reach the open water. My sister and I pull blankets around our shoulders and head out into the chilly night air, where we watch from our deck as Russia slowly disappears from view.

Tomorrow will bring another port, another land for us to explore. But for now we are content here on the sea, watching as that now-familiar pink haze fills the Baltic night sky.