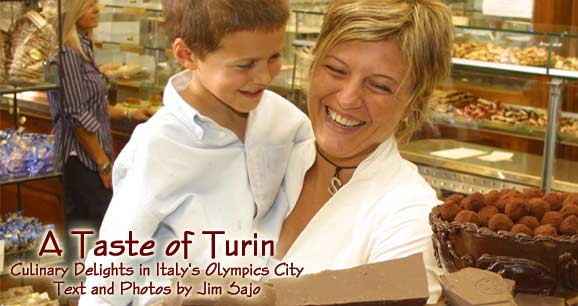 Italy’s Piedmont region is hidden in the extreme northwest, nestled against the French border. One of the most important economic and industrial areas of the country, Piedmont also boasts pristine natural gifts in her mountains and lakes. Perhaps mercifully, this fascinating and beautiful corner of Italy has been bypassed by the armies of tourists who have captured Venice, Florence and Rome. That is about to change.

The capital, Turin, hosts the 20th Winter Olympic Games this month (February 10–26, 2006). Home to 862,000, Turin is at the same time enchanting and modern, regal and bohemian, elegant and raw, glorious and passionate.

With close to 2 million visitors expected during the Olympics, Turin will no longer be anonymous. But forget the 13th century baroque architecture of the Savoy family dynasty, which ruled the city until 1536 when it was occupied by the French. Forget the modern industrial powerhouse of Italy’s automobile industry, and don’t think about the exceptional art collections and legendary nightlife of the city. What will all those people eat?

Fortunately, Italians do not often miss a good meal, and Turin is no exception. But with the enormous variety of bread, pasta, cheese, meat, fish and wine to choose from, you need a bit of advice. The truth is, just about anything will taste good; but I found the best foods of Turin to be truffles, Barolo wine and chocolate.

Turin ’s most famous gastronomic celebrity, the truffle (tartufo), is a fungus that grows just below ground among the roots of hardwood trees. While the black truffle proffers a mild flavor that diminishes with cooking, its royal cousin, the white truffle, has a pungent, powerful taste that stands up to pasta, risotto or any cut of meat. Available in limited areas and only in late autumn, Italy’s most precious white truffles come from around Turin, and are spectacularly expensive.

Truffle collection is shrouded in stealth and mystery. Specially bred dogs sniff out the treasure for their masters. Once removed from the ground and wrapped carefully in delicate linen handkerchiefs, the prize is carried to local markets. They are sold in quiet stalls away from the bustle and din of merchants selling more common goods. Prices for white truffles (which are ten times as expensive as black truffles) routinely exceed US$ 1,000 per pound.

Hours later, your waiter shaves wafer-thin slices onto your meal. The number of shavings determines the price, which will vary from stratospheric to ridiculous. The rich, smoky and aromatic delight is worth every euro.

Wash down your truffles (along with remorse at the cost) with a glass of Barolo, which has a deep garnet color and rich, heady flavor. Barolo is produced from the finest of the regional nebbiolo grapes. Nebbiolo is derived from the Italian word nebbia, for fog. The grapes are harvested in late October, when an intense fog settles into the Barolo region where nebbioli thrive.

Barolo is aged a minimum of three, but more commonly up to eight years before it is sold. Top Barolo wines regularly win recognition at international competitions, and are widely considered Italy’s best. In a typical Turin restaurant, expect to pay US$ 50 to US$ 75 for a good bottle. Some labels will run well over US$ 100.

For dessert, it is hard to imagine a more delicious combination of sins than tasty local chocolate and a fresh-pulled espresso. Turin’s love affair with chocolate dates back to the 16th century, when Emmanuel Philbert of the ruling house of Savoy toasted victory over the French with a cup of steaming hot chocolate.

By the mid-1700s, Turin’s gentry — politicians, popular artists and nobles — met regularly in the dignified atmosphere of fine cafés where they enjoyed bicerin, a mix of hot chocolate, espresso and whipped cream. The drink, named for the small, rounded glass in which it is served, is still a tradition today.

The modern star of Turin’s chocolate industry is gianduja, a smooth delight of chocolate and hazelnuts. The city is filled with small, elegant shops selling every imaginable shape, size and variety of the chocolate, including milk chocolate and bittersweet.

It is easy to fall in love with Turin. The elegant architecture and extraordinary array of museums will satisfy your intellectual curiosity. For more visceral desires, the bohemian bar and music scene exceed expectations. The 2006 Winter Olympic Games will add a layer of intense passion to the already vibrant feel of the city. And everyone will be happy with the three culinary superstars: truffles, Barolo wine and chocolate.

Dining in Turin is a wonderful adventure. Historic, elegant restaurants in the city center compete with the youthful funky bistro scene of the Roman Quarter. The international dining options are some of the best in Italy. You can even enjoy genuine pizza from Naples. Here are four excellent choices:

Regal furnishings and lofty crystal chandeliers exude the elegance of the city’s past. The kitchen serves continental specialties prepared to perfection.

Their version of the local favorite,bagna cauda, “warm bath” (a warm dip for bread and vegetables, traditionally made with olive oil, butter, anchovies and garlic, sometimes cream), should not be missed. The exclusively vegetarian fare, superb presentations and an excellent wine list make Punto Verde a vegetarian’s dream.

The best of many authentic Neapolitan pizzerias, and loved by local residents.

You’ll find chocolate shops on almost every street. Here are three of the best.

Ghigo Pasticceria (Via Po #52/b) is one of Turin’s most famous specialty chocolate stores.

Turin ’s modern history is based on the automobile industry. But don’t try driving your car there; traffic is terrible, and parking is impossible. There are no direct flights from North America to Turin. Once in Europe, catch one of the many discount airlines (Ryan Air, Air One or Easy Jet), instead. Alternatively, travel by train to Milan and transfer by train or bus to Turin.

Purchase a “Torino Card Cultural Olympiad” for US$ 28 (valid for 48 hours), US$ 32 (72 hours) or US$ 53 (5 days) at Turismo Torino Information centers. It grants free entry into more than 140 museums and castles, offers reductions on theater and concert ticket, and allows free rides on all metropolitan public transport, including Olympic shuttle buses. 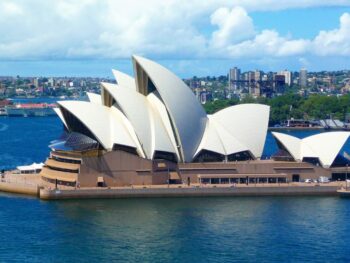