Robert DeLaurentis hasn’t always been a pilot. He was a member of the U.S. Navy for 14 years (4 years active duty, 10 years reserves), retiring as a Lieutenant Commander.

He is also a businessman and entrepreneur, overseeing a group of residential properties and the property management company that supports them — but flying is his passion, a defining part of his purpose, and one of the greatest challenges of his life.

Born in New York and raised in the San Francisco Bay area of California until the age of 10, Robert and his family went on to spend three years living in Indonesia. Returning to the Bay Area after that time, Robert stayed there until attending college at the University of Southern California (USC). After his initial tour with the Navy, he settled in San Diego, which remains his home base to this day.

Through flight, Robert has had the opportunity to visit 53 countries in the past three years. In the summer of 2015, he circumnavigated the globe alone in a single-engine plane, crossing the Atlantic, Pacific, and Indian Oceans. Now, he has taken on a new challenge that is deepening his global perspective: circumnavigating the poles.

Using Biofuels to Fly Over the North and South Poles

Robert is on a mission to share peace with everyone he meets. “The North and South Pole are the two places on Earth where peace has always existed,” he says. “By making this flight, I want to connect the poles and everyone in between with peace.”

He named his plane “Citizen of the World” and will be the first pilot to use biofuels to fly over both poles. He is also carrying a Wafer Scale Spacecraft for NASA and an atmospheric plastics testing experiment for the Scripps Institution of Oceanography.

Throughout his pole circumnavigation, this equipment will be reading the levels of plastic in the atmosphere, giving scientists on the ground more data with which to create environmental sustainability solutions.

Citizen of the World

Robert’s choice to use biofuels for the portion of his flight that is over each of Earth’s poles is in alignment with these sustainability efforts. He is examining what it means to be a “Citizen of the World, for the World,” serving as an environmental steward and spreading peace across the planet. Some in the media have even started calling him the “Peace Pilot.”

“I seek out adventure from 37,000 feet up,” says Robert. “I also seek a balance to share what I’ve learned as an aviator and to learn from others across the planet. There are lessons and wisdom of a life well-lived.

I’m seeing the similarities, not the differences, among the people I’m meeting. My inspiration has been the support that other people have given me. Their belief in me, my mission, and my team. This allows me to take myself and the plane to our absolute and total limits. I ask myself, ‘Is failure even possible with this much love and support behind me?’”

Partway through his current mission, the COVID-19 pandemic struck. Entire countries shut down, and people were asked to shelter in place. Robert was in Spain when the quarantine orders came.

With friends and family encouraging him to fly home and forgo his peace mission, he made an unlikely decision: Robert sheltered in place in Spain, determined to see his mission of global peace and environmental stewardship to completion.

“When COVID-19 first touched down here in Spain — one of the two epicenters of the coronavirus in Europe — and borders started shutting down, it would have been easy to end our Polar Circumnavigation and retreat back to the United States,” Robert shares.

“Many of my friends and some family encouraged me to do this, feeling it would be safer. My team and I made a strategic decision that I would stay here, where we believe we can have the most positive impact and be of the greatest service.”

This isn’t the first challenge Robert and his team have had to overcome. They have had countries deny Robert access to their airspace, so he flew around. They have had large corporate sponsors cancel sponsorship, so they filled in the gaps with their own resources.

Robert has encountered cyclones and extreme temperatures during his flight, and he took extraordinary measures to save the plane and himself. They have had people tell them this flight simply couldn’t be done, and they’ve proved the naysayers wrong.

Taking a stand against the coronavirus and refusing to let it derail this mission of peace was a natural choice for Robert and his team.

“I have made the conscious decision to stand up to this virus,” he says, “taking all the recommended safety precautions and still continuing on with the mission. While anything can happen in the coming days and my team and I are constantly monitoring the situation, we are doing everything in our power to uphold our commitment to inspire people to live their impossibly big dreams — including scientists who are ‘dreaming big’ and working to eradicate the coronavirus.

We want to inspire others through the wonder of flight — in planes and in our minds — and the power of courageous action. We may not be in the air flying at this time, but we continue to soar in the belief that, even with social distancing, we are all still connected. Peace on the ground and in our hearts and minds is worth fighting for, and I am fighting for that peace for and with all of you now.”

Author Bio: Haley Steinhardt is a freelance writer, poet, singer, and mom to one human and four fur babies. She is based in Cleveland, Ohio.

Bike Touring in Coastal Maine
Next Post: Respecting the Nutmeg in Grenada 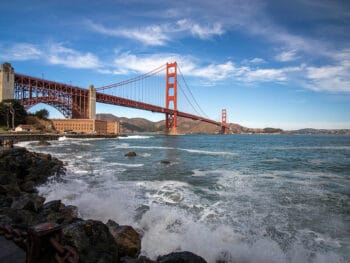