The title of Pat Ruddy’s newest book “Holes in My Head,” is frighteningly misleading until you read the subtitle: “…a Lifetime Dreaming Golf Holes.”

The word dreaming, in this case, is the most active of verbs because the Irish golf journalist-turned course architect writes that he’s been consumed day and night for 60 years with images of golf holes in his head – and then often built them.

“Golf courses are a clear expression of landscape art such as was found previously only in the grounds of great palaces,” writes Ruddy, who has a 50-year design career. “Golf brings people out of the cities and into some of the most amazing landscapes on the planet. Seaside, mountain, cliff top, and parkland settings all enrapture the human soul.”

His coffee table book is more than just colorful, gorgeous photographs his dreams created and others he’s cherished, but also a stroll through his considered musings about the modern golfer matched up against classical courses. “It’s partly biographical. It marks my body of work,” writes Ruddy.

Pride in his baby – Ruddy’s home course and residences

The man himself is unassuming yet definitive. He has no problem classifying The European Club, his home course and signature design south of Dublin, as the best links in Ireland as he personally serves you a slice of apple tart in the understated clubhouse. Ruddy so adores the club that his home, office, and extensive golf library are just upstairs. Sometimes he hits practice shots off his balcony. He can do that, he says, because it’s his place.

Speaking of homes, Ruddy, in the book, reveals the sad story of how he bought his dream home – a Georgian beauty alongside Dun Laoghaire Golf Course designed by the great Harry Colt, one of golf’s original, golden age architects.

“I spent decades enjoying the view and imagining Colt walking that land and planning the golf holes. It was a dream set up,” Ruddy writes. “Then came the bombshell: the golf club had sold its land to developers…and they literally buried poor Harry Colt.”

The classic course was replaced by a complex of five-story apartment buildings.

“My advice had always been one should not buy a property for the view as one does not own the view,” the amiable, self-effacing legend laments in hindsight.

Ruddy is happiest, anyway, at The European Club, his lovely links course, where he works with his adult children Gerard, Sidon and Patrick, who are living proof that when it comes to charisma, the apple doesn’t fall far from the tree.

In truth, Ruddy is at home at any links course.

“Ireland is only one-eighth the size of Texas yet it holds a lofty position in the world of golf as it quite simply has the best seaside dunes courses in the world. These gems are called ‘links’ because they are established on ‘linksland’…that is, the sandy plains and dunes blown up from the beach or deposited by receding seas which now ‘link’ the beach to the inland soils,” Ruddy explains. “There are only 150 true golf links in the world and Ireland has no fewer than 52 on the tidal coastlines standing firm against the ravaging Atlantic Ocean and the pounding waves of the Irish Sea.”

He describes aptly the epic natural settings for the vaunted Irish links golf courses – including his European Club – and some of his other designs including Ballyliffin Golf Club’s rugged Glasheedy Links and the scenic Sandy Hills course at Rosapenna Golf Club – both up in Ireland’s northwest.

“It seems like a miracle that the golfer gets home alive from a round which features play on a complex surface that makes physical and psychological demands on the player,” Ruddy writes. In that vein, he examines the subject of motorized golf carts, which had previously been only an American fixture – and the expense and complexities of operating “ride-on golf cars” at courses. “But it has been said the golf car extends the golf life of veterans by as much as 15 years, so cars are a win-win for the club and the older member who is kept involved and happy and spending.”

People versus the Professionals

Ruddy explains, too, the challenge of designing a course for both the casual/average player and the championship-level golfer.

“On the first tee professionals bomb it up the middle while the club folk shake in terror and knock the ball out of bounds or give it a feeble pop. The first stroke of the day can have a big bearing on the entire round,” Ruddy insists. He recommends players first warm up their swings at the practice ground which, at The European Club, he mirthfully refers to as “Misery Hill.” Ruddy knows golfers much prefer the actual golf course.

“Everyone likes the back-nine at The European Club as the links sweeps down to the seaside and runs right along the waves on holes 12 through 15.”

As for the professional players, perhaps no one has more affection and appreciation for Ruddy than international tour star Padraig Harrington, the Irishman who won British Open titles in 2007 and ’08 just days after competing at Ruddy’s European Club in the Irish Professional Championship. “I took special care in setting up our links to prepare him for the Open Championship. We had lots of rough and got the greens fast and the bunkers deep. Harrington went over to Carnoustie with an advantage on the field as he had just tasted blood on a tougher course.” He did the same the following year when the Open was at Birkdale.

Designing and Building a Legacy

Ruddy’s other great golf creations are mostly playable for visitors and accounted for in his book. Ruddy also carefully and lovingly – like a superstar surgeon seeking first to do no harm – laid his hands and earthmoving equipment on antique designs in order to renovate and restore the design work of esteemed architects and God…or mother nature, if you prefer.

The European Club is ranked among the world’s top-100 courses of any type – links or parkland.

“Every golfer is an architect at heart. Few get the opportunity to live the dream but everyone can get a feeling for such a scenario by visiting with me in the pages of my book,” Ruddy writes. “In ‘Holes in My Head…a Lifetime Dreaming Golf Holes” I’ve now placed on record the major design works of my career together with some random stories.”

Ruddy’s stories, written as if the reader were having a pint with him after a hearty round, will amuse, inform and inspire golfers to visit Ruddy’s course designs in Ireland – or visit the man himself at The European Club. 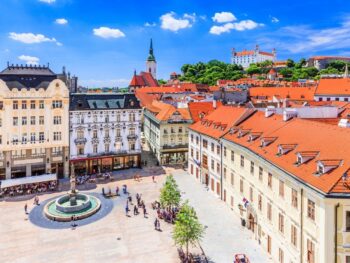