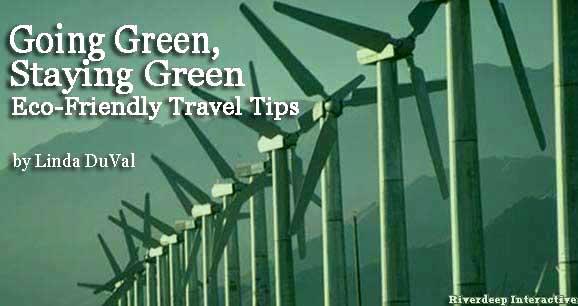 We fly. We drive. We create pollution.

We toss a half-full bottle of hotel shampoo. We add to the landfill.

We have the hotel staff change our still-clean sheets. We waste precious water.As more travelers and people in the travel industry are starting to recognize, if we’re going to continue to explore the world at our current pace we need to become more conscious of the effect our travels have on the world.

It’s no longer just a nice thing to do. It’s essential, say some travel experts.

“Guests are starting to demand it,” says Patricia Griffin, president and founder of the Green Hotels Association, a 15-year-old trade association with more than 300 members.

And the industry is listening.

Many hotels, inns, resorts and other accommodations have stepped up to the plate, environmentally speaking. Though automobile rental companies are offering hybrid cars, and some flight programs are offering “carbon offset” plans that plant a tree every time you fly, it’s the lodging industry that has come up with the most creative and ingenious ideas for protecting the environment.

Hotels that only offer to not change your bath towels and sheets daily are so far behind the curve, they’re practically archaic. Many new and innovative ideas have far surpassed that initial effort – which isn’t to say it shouldn’t still be done.

“As an industry, we need to do everything we can,” Griffin says. “We encourage hoteliers to do more,” she says. “For one thing, it’s the right thing to do. The bottom line for us is pleasing our customers, and this is what they want.”

In fact, guests are starting to expect hotels to do their part, she says. Customers asking about “green” practices have surged in recent years.

One resort – the Lodge at Whitefish Lake in Montana – not only talks the talk, but walks the nature walk. A controversial proposal for a major housing development was averted when the lodge’s owners, Dan Averill and his sons, purchased the 37 acres. About six of those acres soon will be developed into low-density housing and one acre will be used to expand the lodge.

The new owners donated the other 30 acres, known as the Wisconsin Wetlands, back to the Whitefish Lake Institute to be preserved as a natural area. The Averills also pledged $110,000 toward the restoration of the wetlands area.

“The land itself holds (and filters) all the water that runs into Whitefish Lake,” says son Brian Averill. “We felt this was a way to help out both the community and the environment.”

“The fact is, resorts are built in the most beautiful places,” he says. “We just want to keep it that way. We think this will be a model for other resorts to follow.”

The “green” movement in the lodging industry began with baby steps. Travelers might have first noticed it at national parks. Perhaps they saw soap and shampoo dispensers in bathrooms instead of tiny disposable bottles. Recycle bins began making their appearances in public spaces.

Xanterra Parks and Resorts operates lodges in many of the nation’s parks, including Grand Canyon and Yellowstone, and has won numerous awards for environmental excellence. Xanterra’s programs include on-site renewable solar photovoltaic energy systems and a groundbreaking effort to recycle campers’ propane tanks.

“You can’t get all the propane out, and you can’t recycle the metal with propane inside,” says Chris Lane, vice president of environmental affairs for Xanterra. “So we came up with a machine that punches a hole, removes and reuses the propane, and then smashes the metal bottles flat for scrap metal recycling.”

It’s this kind of innovative effort that has netted Xanterra numerous environmental awards.

“The tourism industry has lagged behind some others in environmental awareness,” he says. “In part, it’s because we considered ourselves a pretty clean industry to start with.”

But in the past seven or eight years, the industry has stepped up its part in the battle for a cleaner earth. He’s the first to admit it is, in a good way, self-serving.

“What’s good for the environment is also what’s good for our parks, and for our business,” he says. “Who wants to work for a company that spills oil and pollutes the earth?

“We all have to live on this planet, too.”

Accommodations from Costa Rica to the United Kingdom, from Hawaii to the Gobi Desert, are finding ways to be “green.” Here are some examples:

It is reachable only by air and water. To offset the carbon-creating travel required to get there, the lodge is installing a river-hydro plant and solar panels to meet its power needs. It also only uses suppliers who conduct their own programs of carbon reduction.

The list is virtually endless. New ideas and creative solutions are coming all the time and hotels seem eager to out-do one another, making it not only easy to be green, but easy to stay green.

What can I do?

The Houston-based Green Hotels Association suggests some things you can do to make travels more environmentally friendly. They include:

Walk when possible, or use public transportation. Instead of renting a car, use the hotel van or other available transport. Share a taxi or rent a bike. If you need a car, rent a hybrid, if possible.

When booking lodging, ask the hotel if it participates in “green” practices. If nothing else, it will become aware that being green is  important to guests and may initiate some practices.

Take a shower, which generally uses less water than a bath.

Turn off (or minimize) the air conditioning or heat when you’re not in your room.

Turn off lights and televisions before you leave. Close the drapes.

Rewrap your bar of soap in the hotel bathroom so housekeepers know you want to continue using it. If your hotel provides new soap daily anyway, take the soap home for later use. Leave unopened bath amenities at the hotel; take home partially used ones. Encourage your hotel to refill the little bottles instead of discarding them.

Take only brochures and maps you really need from information stands and offer to share them with others.

Linda DuVal is a freelance writer in Colorado Springs, Colorado.

The Heartland of Fiji: A Visit to Dubalevu Village
Next Post: Getting a Raw Deal: Dining at New York’s Pure Food and Wine