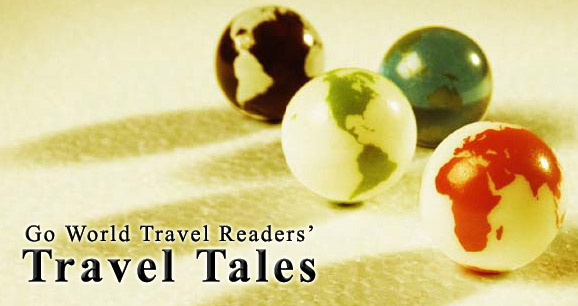 Everyone has a story, especially when we travel. Here are some of the latest travel tales submitted by Go World Travel Magazine readers.

A Friend When in Need

It’s funny the way one person can define a whole country. Take Andrew, from Perth, Australia.

When I was 20, I spent several weeks backpacking through Europe with a friend. As two girls traveling alone, things had gone fairly well for us. Besides a few overly zealous Italian men in Rome, we had felt safe and happy.

Then we headed to Interlaken, Switzerland to stay at Balmer’s Herberge, a wildly popular youth hostel. Just our luck, but we were some of the few young women staying there that night. No matter. We joined a large group of Australian guys who were watching a James Bond film in the main room. The beer had flown freely that night, and soon the “American women” jokes began.

At first we just kept our mouths shut, hoping they wouldn’t notice we were American. But our wide-eyed American naïveté must have given us away, and harassment ensued. Just when we were about to leave in frustration, a quiet young man in the back of the room came to our aid. With a cutting comment to the others, Andrew nodded for us to follow him. We walked to a Swiss coffee shop, where we sat and talked for hours.

Years later, when I was sent to do some work in Australia (the first of many such trips), it was Andrew who came to mind. The drunken boys at the hostel were long forgotten, and it was this kind young man who represented Australia for me. My work in Australia was the beginning of a long love affair with that great country. But that affection began with one young man who was willing to step out and be a friend. — Danielle Martin

My wife, Pat, and I spent an incredible week a few years ago, walking the National Trail along Hadrian’s Wall in the north of England. This 84-mile hike starts on the east coast of England, near Newcastle, and ends in the small hamlet of Bowness on the Solway on the west coast, and offers some of the loveliest scenery and friendliest people anywhere in England.

We set off as a lone couple, but quickly met others with the same goal — completing the hike! After six days of sharing fascinating stories, tired feet, crazy weather and delicious meals with our new friends, we all convened for one final celebration at the Kings Arms Pub in Bowness.

The sun was just setting over the Scottish hills and the warmth in the pub was very special. As the evening wore down, one of the locals, who obviously had downed many a pint here in his day, waved me over to his table in the corner. “You people walked the entire length of the wall?” he said.

When I nodded, he said that we had made history. When he saw the perplexed look on my face, he replied, “The Romans were never that crazy!” — John Scheleur

After 12 hours of touring Nanjing in a bus crammed with cranky teachers, I craved space. As the bi-fold door chuffed open to freedom, our leader (a sprightly woman with the stamina of an ox) announced that dinner would be in three-quarters of an hour, and we must return to the bus in 30 minutes.

As I twitched involuntarily, I heard my seatmate growl under his breath. “Wanna sneak out?” I whispered. “Meet me in the lobby in ten!”

Ten-and-a-half minutes later we ducked into a tiny restaurant that was hidden behind shrubbery, and were given a back table.

We pulled out Chinese-English dictionaries and flipped to the restaurant scenarios. Ordering beer was easy; ordering sustenance required patience and humor. We received a tasty meal, including a wonderful beef-and-peppers dish. Now relaxed, celebrating success, we preserved our memories digitally.

Two nights later we returned. Deciding on the beef-and-pepper dish again, we were informed by a total of five wait staff that the restaurant didn’t serve beef. Ever.

Baffled, I pulled out my digital camera and scrolled to the evidence. “Look! Beef with peppers!” Our waiter leaned in, frowning in concentration. He straightened up with a snap, grinning happily: problem solved. “That,” he pronounced, “was not beef!”

The waiter looked at each of us, smiled hugely, and rubbed his stomach cavity. A lot was left to our imagination. — Cindy Patten

Calabria, Italy: An Unexpected Gem
Next Post: The Heartland of Fiji: A Visit to Dubalevu Village