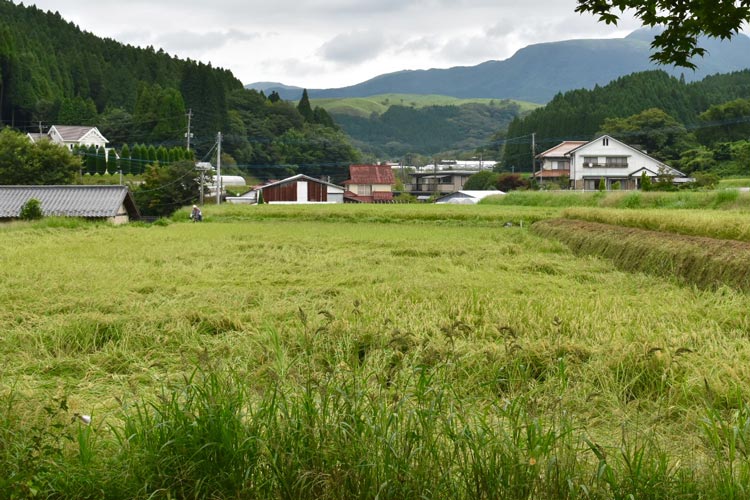 Editor’s Note: While travel is complicated right now due to the current world health situation, we can still bring you inspiring stories of travel around the world. This story is on the beautiful little-known Japanese island of Kyushu. Enjoy! #dreamnowtravellater

The southern island of Kyushu features the Aso Caldera, a large basin that was formed by volcanic eruptions thousands of years ago. Around 70,000 people now live in tiny hamlets around the caldera and make their livelihood from the rich, volcanic land.

Ubuyama is a picturesque village surrounded by ancient fern trees on the banks of the Tamarai River. It is the kind of place that you pass through and gaze out of the car window at local life without thinking to stop, let alone stay the night. However, it could not be more different than large Japanese cities, and local people are extremely welcoming to visitors.

I stayed at Yamanosato Minshuku, a traditional farm guesthouse and restaurant that produces the region’s famous Akaushi beef, one of the most succulent types of Wagyu beef in Japan. It’s a family business and has been passed down through generations. My host, Yuri, was born at the guesthouse and now lives there with her mother, husband and three young daughters.

Yuri looks after the guests while her husband rears cattle on their private ranch and tends to their own rice field. Her mother runs the kitchen, providing hearty Japanese meals from timeless recipes. Even Yuri’s children have a part to play and sell attractive plants and other trinkets from a stall in the restaurant’s foyer.

Over cups of hot green tea, Yuri made small talk and demonstrated her excellent English. She radiated warmth and was curious about my life in Japan. The restaurant was adorned in traditional local wood, and large benches sat neatly under rectangular tables, awaiting the evening’s customers. Many of the tables were set up with small grills where customers can cook their own dinner in a style known as yakiniku.

Yuri led me through a beautiful courtyard at the back of the restaurant to the guesthouse, a traditional wooden building dating back more than 200 years. A large cat eagerly watched koi carp gliding around a pond, surrounded by rocks and Japanese stone lanterns.

Each of the four tatami rooms had original bamboo ceilings and balconies where you could look out to the mountains in the distance. The only sounds were the croaking of birds and the trickling of a nearby stream that supplied water to the rice fields.

There’s a communal bath for guests to use at any point during their stay; the water comes from a local hot spring and is rich in nutrients. There were plenty of fresh towels, traditional bath robes and a selection of toiletries so you really didn’t need to take anything with you and could focus on relaxing.

Before going for dinner, Yuri made up my Japanese futon and even brought an extra mattress for added comfort. The pillow was stuffed with traditional buckwheat which, while it seemed hard at first, is known to provide excellent support for your neck and softens gradually as you sleep.

The room was cozy and felt a million miles away from the bright lights and noise of Tokyo.

The meals were served in the restaurant and I wore a pair of traditional Japanese wooden sandals to walk the short distance across the courtyard. A tray of colorful pickles was neatly arranged in the center of the table and Yuri introduced each one. The great thing about trying homemade pickles is getting to see the creativity behind them.

Pickles are famous in this area and they were as vivid in color as they were in taste. Sampling them was truly an awaking for the senses and I certainly had my favourites. The shiso plant is very prominent in Japanese pickles as both the seeds and the leaf are used separately. Its taste is not immediately obvious, but it has a fragrant after-scent which was unlike anything I’ve tasted.

There was an array of chunky seasonal vegetables and tofu which reflected Japan’s love of healthy, nutritious ingredients. A white dish caught my attention and seemed to resemble a type of lumpy cream cheese, but Yuri explained it was in fact compressed soya beans. It had a salty taste and complemented the rich ingredients of the meal perfectly.

Yuri’s husband suddenly appeared with a sizzling plate of akaushi beef on a bed of diced onions. The red meat was tender and melted on the palate magnificently. Yuri brought some fresh wasabi, which set off the taste of the meat.

The beef comes from red cows which are kept on the family’s private ranch and are free to roam in the wide pastures. The animals are typically between 24 and 27 months so the meat is tender and low in fat.

To accompany the meal, I drank Ubuyama sake, which is made using local rice and spring water from a nearby water source. Yuri frequently filled my bowl with rice, grown in their own paddy field, which tasted clean and less starchy than other rice that I was used to.

After a comfortable night’s sleep, breakfast was served in the same place in the morning. The Japanese breakfast included an array of different pickles, rice and miso soup, as well as more western-style choices such as a fried egg, toast with peanut butter or jam and chocolate bread. For first-time visitors to Japan who may not be used to a Japanese breakfast, the varied selection of items ensured that there was something to suit all tastes.

The family’s hospitality lasted until the moment I left. As I placed my suitcase into the car, Yuri chatted to me in English and recommended a visit to the nearby Ubuyama Farm shop where I could buy many local products. Just like that, my short visit to the farm was over.As I watched the family waving me off, I knew that I would always remember my stay in Ubuyama.

Ubuyama is located about 1 hour 10 minutes by car from Kumamoto Airport or 2 hours from Fukuoka Airport. Visitors should rent a car, as the region is remote and public transport is infrequent. Both Kumamoto and Fukuoka are accessible by train and covered by the JR Rail Pass.

Author Bio: Mark Webster is a British writer, content creator and English teacher based in Kanagawa, Japan. He writes travel pieces for online publication Voyapon, as well as maintains his own travel blog and Youtube channel.

Monaco Grand Prix and Running of the Bulls Stopped in Their Tracks but Racing to Return
Next Post: Long Beach, California: A Year-Round Family Destination