Not many travelers make it up to northeast Laos after partying in Luang Prabang and Vang Vieng, but I’m really glad I did. I counted the endless green rock hills on rattling buses with a purpose – I wanted to see the history buried in the limestone chambers.

It was in the Vieng Xai caves, near Sam Neua and the border with Vietnam, that a secret war was fought.

The natural caves were the perfect place to carve out bunkers, sleeping quarters and offices to shelter the Pathet Lao Communist movement during the Laotian Civil War. This “Secret War” from 1964 to 1973 saw troops battle against the Royal Lao Government, strongly backed by the U.S. military in a bid to stop communism in Southeast Asia.

I’d come from Thailand, so I was surprised at how few foreign tourists made it past Nong Khiaw, which was the outermost sojourn from Vientiane that backpackers would willingly tread. My boyfriend and I had to wake up a sleeping attendant to even get our ticket to Sam Neua and it was a pleasant shock when our bus actually arrived. It still took 12 hours to get there because of the various stops and delays encountered on most journeys in Laos.

We trundled in at midnight and a songthaew driver agreed to take the two dirty and exhausted foreigners in front of him to a hotel for 3,000 kip (about 35 cents). As we pulled in, it became clear that he meant 30,000 kip (about $3.35) and he’d been confused. This was infuriating but we were well away from tourist territory now, so we just paid it.

The woman at the hotel spoke no English, either, so we were having an adventure so deep into Laos that we ran a risk of actually learning the language. We chose the type of room we wanted using rectangle drawings, and it was perfect.

The language problems meant that it was sensible to hire a moped to take us to the caves the next day, as we had no idea what was going on. While we were raiding the local minimart for snacks, a 6-year-old boy called us motherf—ers, so he knew some key phrases. Another strange thing was that in the morning we were cold – actually cold for the first time in Southeast Asia. The gray mist and drizzle in the mornings made me feel like I was back in Manchester again. 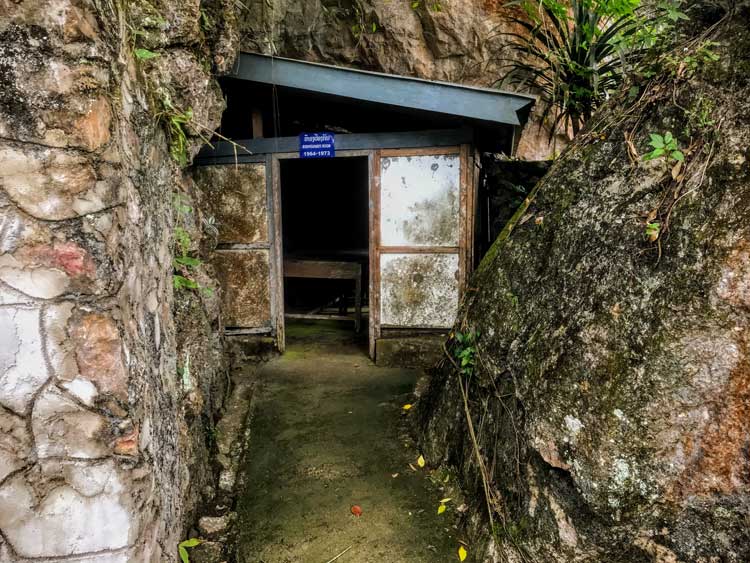 It was so cold on the bumpy road to Vieng Xai that we had to stop to swathe ourselves in sarongs and scarves for warmth. The appearance of two foreigners on a bike elicited loads of smiles and waves – especially from kids on their way to school – which we weren’t expecting at all.

Eventually, we got to the caves and the English language tour wasn’t for hours so we drove around enjoying the hundreds of shades of green around us, while trying to find food. I’m a vegetarian so we couldn’t really eat anywhere without a menu that we could translate, but eventually, we found a noodle place where the woman spoke enough English that my food was, thankfully, meat-free.

We returned to lurk at the entrance to the cave information office, photocopied map in one hand, an audio player in the other, waiting for our tour to begin. A group of Thai tourists were as surprised as the locals to see us there, and nobody expected it when another Brit appeared. He’d had the exact same problems trying to get there as we had with delays and communication problems, but was as enthusiastic to learn about the whispered tales of Laotian history as we. 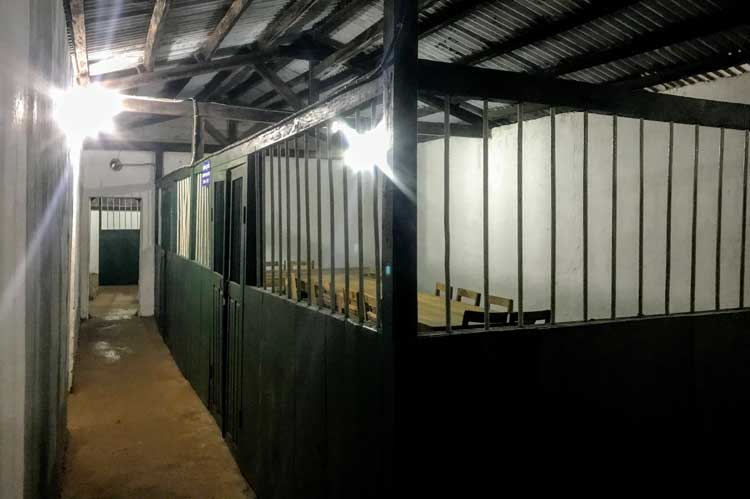 What to See on the Vieng Xai Caves Tour

There are 18 points to see on the tour, but two were closed due to “moss.” That was the only explanation we were given and none of us questioned it. They’re spread out across the landscape so we drove between them on our bike while trying to figure out the grayscale map.

An official guide met us at every cave. His job was to tell us what button to press on the audio guide. It wasn’t surprising that nobody would repeat the stories every day themselves – the device contained an exhaustive oral history recounted by actors and survivors, based on documents from the time.

The stories detailed the life in the caves: They could only leave in darkness, without leaving a trace of their existence. They even farmed in the night. There were 23,000 people who lived inside the network of 480 connected chambers, including a hospital to care for them, as well as the Pathet Lao headquarters for logistical discussions.

Living in the Caves

The “impregnable” caves were considered to be a great strategy. However, there were drawbacks as villagers were afraid of becoming trapped if entrances were destroyed, as well as the threat of being gassed in them. One of the more famous residents was Prince Souphanouvong, aka the Red Prince, a nationalist who joined the movement to fight French colonialism (before the U.S. was involved).

Being inside the stark limestone chambers reminded me of a reconstruction of a war room in a museum – except it wasn’t, it was the real deal. I enjoyed seeing history being told from another perspective, even though I was completely unaware of the alternative narrative.

The caves were impressive in their own right, with views across the karst-studded fields. It couldn’t feel farther away from home, or more unlike a forced trip to the Imperial War Museum. Those who guarded the caves would have stared at the same grassy patchwork landscape for the daylight hours of each and every day.

The U.S. pulled out of Laos in 1973 as part of the Paris Peace Accord and Pathet Lao became a part of the government, later taking the capital of Vientiane – signaling the end of the Second Indochina War. In 1997 the U.S. formally acknowledged its part in the Secret War that was heavily overshadowed by the Vietnam War.

One of the bigger caves contains a theater that is still used today for events like films and weddings. The cave spaces that protected them from bombing for so long still continues to be a part of society, even now that the village lives back out in the open.

If You Go to Laos

There aren’t loads of websites with information about Vieng Xai as it’s so off the beaten track, but these websites will help you along your way:

Where to stay in Sam Neua (https://www.travelfish.org/accommodation/laos/northern_laos/hua_phan/sam_neua/all)

A quick guide to bus travel in Laos (https://www.laos-guide-999.com/travel-by-bus.html)

Download an offline map app like Maps.me (https://maps.me/) to help you get around in an area without much WiFi coverage.

Find out more about the fascinating history of Northeast Laos in this Rough Guide (link: https://www.roughguides.com/destinations/asia/laos/northeast/)

Author Bio: Jen Sizeland is an author, freelance writer and producer with a travel blog that focuses on ethical and eco-friendly travel and living. www.landofsize.com