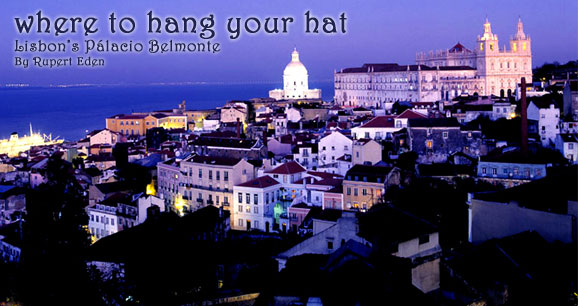 Lisbon, Portugal’s capital, has experienced an unprecedented boom since it became the European City of Culture in 1994, and then hosted Expo 98 and the Euro 2004 Soccer Championship. These events resulted in a huge leap in visitors and paved the way for new roads, hotels, and a modern and efficient metro system.

As part of a major overhaul of Lisbon’s historic patrimony, Mayor Santana Lopes has encouraged businesses and government to convert crumbling palaces and state buildings into mid-sized luxury hotels, museums, art galleries and modern residence blocks. One such grand example is the Pálacio Belmonte.

Imagine a hotel and exclusive business club which takes hours to find, that taxi drivers have never heard of, and where you are greeted by a startled maid in complete darkness in the foyer, and where you and the rather louche receptionist seem to be the only guests. Arriving at the Pálacio Belmonte, a converted palace housed inside Lisbon’s Moorish castle, reminded me of a horror movie where the guests are spirited away never to be seen again.

A tremendous impromptu thunderstorm added to the atmosphere, and rattling, religious icons spooked me even more. As I intrepidly ventured out of my room to explore, I noticed the most curious thing — bookshelves everywhere were filled with nothing but topics of alternative lifestyles. Titles such as, “Radical Agriculture” or “Cornucopia — A Source Book of Edible Plants,” lined the shelves. As I scanned the bookshelves, I noticed that there was an eerie silence — no music or lights, nobody there, no restaurant or bar — just a vast high-ceilinged coffin of a hotel.

Thankfully, when I awoke the next morning, daylight put a new perspective on things and I was relieved to find other guests munching on breakfast. I was ushered outside to a warm terrace overlooking Alfama’s (the medieval Arab quarter) spectacular churches and the southeastern stretch of the Tagus River (Portuguese Tejo), which flows into the Atlantic Ocean from here.

A huge breakfast table was laid out and the waiter asked what I wanted. I ordered a smoked salmon egg scramble and received my request within 10 minutes. As I ate, the sunshine poured down and lit up the lush tropical garden and a stylish black granite swimming pool surrounded by a wooden deck. I recognized the garden from movie scenes in Wim Wenders’ “Lisbon Story” (1994) and Roberto Faenza’s “Afirma Pereira” (1996), which starred Marcello Mastroianni as a lonely Portuguese journalist. Both films had otherwise left little impression.

After breakfast, further exploration of the hotel revealed a totally different picture from the previous night’s nightmare. Nine huge suites and three luxurious apartments all had their own character. Modern bathrooms, built into ancient Roman and Arabesque structures, changed from black granite to black-, white- and green-colored marble.

The original palace was built in 1449, on the top of the even older fortified Roman and Moorish walls, and joined up three towers: a rectangular keep at the western extremity; a corner tower to the north built on Roman foundations; and a pentagonal 7th-century Moorish tower. By 1730, the noble family that owned the palace had commissioned two Portuguese master tile-makers to make 59 hand-painted panels using over 30,000 tiles. Most of these panels survived the 1755 earthquake and today are the hotel’s hallmark.

When Maria and Frédéric Coustols bought Pálacio Belmonte they found a crumbling building in need of decades of loving restoration. No expense was spared as something between € 20 and € 40 million (US$ 26-52 million) was spent on the project, but thanks to Frédéric Coustols’ artistic eye and architectural genius, the palace’s incredible multi-layered history (dating as far back as 130 BC) is now clearly visible.

In one hallway, a perfectly preserved 19th-century bathtub is restored to its original dark blue and fuchsia painted designs and all around original blue and white azulezo tiles depict Lisbon’s lost era. It is no wonder this restoration project got the thumbs up from Prince Charles, who awarded the couple the prestigious Royal Institution of Chartered Surveyor’s award for outstanding restoration.

About 2.6 million people live in the Greater Lisbon area. Despite somewhat reluctantly adapting to the modern world, Lisbon still remains curiously provincial, rooted as much in the 1920s as the 2000s.

Pre-World War I wooden trams trundle up vertiginous gradients, running over ornate mosaic pavements known as Calçada and passing by bustling Art Nouveau cafés, and skirting the medieval Arab quarter of Alfama below the city’s majestic São Jorge castle. Just over three million “Lisboetas” maintain an easygoing and relaxing attitude towards business and life in general, with none of the underlying violence and hustle associated with most port cities of this size.

Lisbon may be slow, but it has a vibrant, multicultural identity linked to its colonial past. There are large communities of former-colony Brazilians and Africans from Angola, Mozambique and Cape Verde, as well as a large Asian community from Macao, Goa and East Timor. Try not to miss Lisbon’s Oceanarium, which recreates the world’s five oceans.

The 2,780 feet (850 m) Vasco da Gama Tower offers panoramic views of the city and beyond towards the sleek 8.7 mile (14 km) long Vasco de Gama bridge linking the Lisbon airport to a new network of national motorways. Foreign and government investments at the former Expo site have stimulated new accommodations, businesses and nightlife, with the hallmark Fado tradition (a type of folk music) as strong as ever.

The Great Earthquake of 1755 hit 10 on the Richter Scale and was followed by a devastating tsunami and fire killing more than 60,000 people and destroying most of the city’s big buildings. Twenty years of frantic reconstruction followed, with no expenses spared, as Portugal was at the height of its Golden Age.

The investment 250 years ago led to many impressive new palaces and churches and a street grid pattern spanning across the seven hills of Lisbon. Some rare gems from Portugal’s golden age survived the disaster including the Torre de Belém, the Castelo de São Jorge and the Monastery of Jerónimos. The heart of the city is the Baixa, or lower town, an area being considered for UNESCO World Heritage Site status.

Modern developments have enhanced the architectural diversity and richness of the city, including the Fundação Calouste Gulbenkian museum complex housing a world-renowned collection ancient and Arab, Modern and Oriental art. The impressive Centro Cultural de Belém is definitely worth a visit.

Half an hour’s journey south of Lisbon finds windswept sand dunes stretching along the Costa da Caparica. Or, you can head north past the coastal resorts of Estoril and Cascais before reaching the lush wooded heights and royal palaces of Sintra and the gigantic monastery of Mafra, which took 60 years to build. It was famously featured in José Saramago’s epic novel “Baltasar and Blimunda.” (He was the recipient of the 1998 Nobel Prize for Literature.)

Flavors of Mexico City: Where the Locals Eat
Next Post: Cody’s Famous Father: Travel in Wyoming