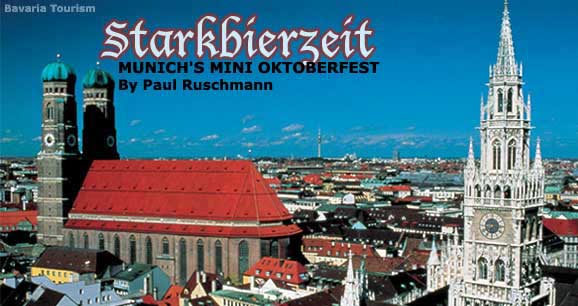 You’re no doubt aware of Oktoberfest, but have you heard of Starkbierzeit? It’s German for “strong beer season,” a mini-beer festival held every March in Munich. During the first two weeks of March (dates vary each year), Münchners take a break from Lenten self-denial, and breweries bring out their most potent beverages. Beer halls celebrate with traditional food and entertainment during this popular event, which locals call the “fifth season.”

The festival goes back to the Paulaner monks who, according to legend, began brewing an extra-strength beer to sustain their strength during Lent, when church rules forbade them to eat between meals. Their beer, first brewed in the 17th century, went by a number of colorful names, including “liquid bread,” “holy father oil,” and “gentleman’s beer.” It gained a word-of-mouth following among locals, and eventually became known as Salvator.

Salvator got a big boost from Napoleon who, after conquering Bavaria, sold church-owned property, including the Paulaner monastery, to local businessmen. The monastery ended up in the hands of Franz Xavier Zacherl, who turned it into a beer hall and started mass-producing the monks’ beer. Zacherl offered Salvator to the public, shrewdly promoting it as a cure for the wintertime blues. Münchners answered the call, descending on his beer hall in droves.

Salvator is classified as a Doppelbock, which means an extra-strength version of the Bock style. “Bock” in Germany, is a generic term meaning strong beer. Just how strong are Doppelbocks? They start at 7.5 percent alcohol by volume. And because their strength is concealed by a strong malty flavor, they can sneak up on even experienced drinkers.

Munich’s other breweries soon followed Paulaner’s lead and brought out their own versions of Doppelbock. But as a tribute to the original Salvator, they gave their versions names ending in “-ator.” This tradition is still followed in Germany, and has spread to craft breweries in America.

The first day of Starkbierzeit is Bavaria’s answer to baseball’s Opening Day. The keg-tapping ceremonies are attended by a star-studded audience, which drinks fresh Salvator while laughing along with comedians poking fun at German politicians. Local television stations broadcast the festivities, and most of Bavaria tunes in.

The most famous Starkbierzeit address is Paulaner am Nockherberg (Hochstrasse 77), which was built on the site of Zackerl’s beer hall. Because it stands on the Nockherberg, the highest point in the city, locals who attend the festivities say they’re answering “the call of the mountain.” The beer hall was badly damaged by a fire in 2000, but last year its owners put the finishing touches on a brand-new facility in time for Starkbierzeit.

Although Paulaner’s décor is modern, tradition is still followed: Salvator is dispensed in ceramic mugs, which keep it cold and fresh; and the Blaskapelle, or brass band, plays a mixture of Bavarian marches and pop classics like “It’s a Long Way From Tipperary.” And there’s everything one expects at a beer hall: sturdy beer maids, grilled chicken and pig knuckles, and plenty of Salvator, of course.

Paulaner isn’t the only beer hall that celebrates Starkbierzeit. Across town, the enormous Gothic-style Löwenbräukeller (Nymphenburger Strasse 2) has been welcoming guests since it opened with pomp and fanfare in 1883. Löwenbräukeller pours sweetish, but potent, Triumphator Doppelbock; serves traditional comfort food; and puts on a nightly Bavarian variety show featuring yodelers, handbell and spoon players wearing traditional Lederhosen; and, the highlight of the evening, a stone-lifting competition.

Each night, the area’s strongest men fortify themselves with a mug of Triumphator and try to hoist a 500-plus-pound (226 kg) stone and keep it aloft. Legend has it that Hans Steyer, the “Bavarian Hercules,” picked the stone up with one finger, a record likely to stand for all time.

Other beer halls join in the fun as well. Unions-Bräu Haidhausen (Einstein Strasse 42), owned by Löwenbräu, turns out a version of Doppelbock called Unimator and serves it in a downstairs brewpub. At Weisses Bräuhaus (Tal 7), which has been linked to brewing for centuries, the Starkbierzeit offering is Aventinus Weizenstarkbier, an extra-strong version of wheat beer. Another downtown location, Augustiner Keller (Arnulf Strasse 52), a downtown beer hall decorated with dark, wood-paneled walls and deer antlers, serves up Maximator — a good accompaniment to the reasonably priced food served there.

But the most intriguing Starkbierzeit venue might be Forschungsbrauerei Jakob (Unterhachinger Strasse 76), which means “research brewery” in English. By tradition, it’s allowed to serve its strong beer, St. Jakobus, a week before the festival officially opens. Forschungbrauerei is a small, family-run establishment whose entire production is consumed on the premises. The brewery takes a bit of an effort to find — it’s in the suburbs, about a 10-minute walk from the commuter rail station — but worth the trip.

Starkbierzeit isn’t widely publicized, which is fine with Münchners. It’s their time of year to revel in Bavaria’s culture and traditions. The festivities are a mini-Oktoberfest without the crowds, a chance to enjoy the local color without scrambling for a hotel room or dinner reservation. If you’re coming, be sure to bring a smile, a hearty appetite, and a taste for strong beer.

Dallas in Style: Travel in Texas
Next Post: Walking Through Lava