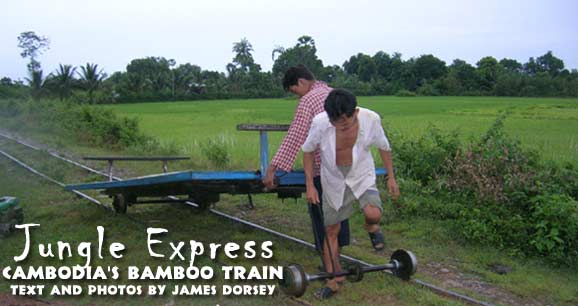 Deep in the Cambodian jungle I was rewarded with the kind of experience only those who wander far afield can find. Locals call it the Norry Train, but to everyone else it is the Bamboo Train, and it is great and simple fun.

During the second half of the 19th century, Cambodia was a part of French Indochina and the French colonists dotted its rainforests with plantations. They grew coffee and banana, among other things, and needed a way to transport this produce from jungle to market. So they built a small-gauge railroad complete with miniature steam engine specifically for this task.

Judging by the size of the tracks, I figure the train must have been akin to today’s amusement-park rides, but in its day it got the job done.

The little train chugged along for half a century until the self-proclaimed communist organization Khmer Rouge came to power in 1975. In their attempt to create an agrarian society, anyone with an education or anything that provided information or even transportation was the enemy.

This included the little jungle train. They destroyed the engine, but left the rails intact, thinking them worthless without the train itself. Years went by and the jungle claimed the tracks for its own.

Today, nearly three decades after the fall of the Khmer Rouge in 1979, Cambodia is desperately poor and in need of any and all modes of transport. Most of its roads are dirt. The local jungle people always knew of the train tracks, and gradually began to clear the undergrowth and land mines that had saturated the area.

The tracks run for about 200 miles (320 km) through the heart of the country, and make a perfect little highway for those smart enough to make it operational. I learned about the train from a guide I hired in Phnom Penh. He had only ridden it once before, since doing so is considered a luxury among many of the local poor.

There are no actual stations or stopping points, but rather, a series of gathering points that the jungle people use; places where they come together to socialize and barter goods. This is also where they board the train.

With no steam engine available, locals collected old axles left from military vehicles, of which there was an abundance strewn through out the countryside. They cut and sized them to fit the tracks, added a wooden platform with a woven bamboo matting for comfort — thus the name — and attached a portable, one-horse-power gasoline engine, linking it to the axles by a rubber strip from an old tire.

The axles sit bare on the track, steel on steel. This creates quite a light show of sparks while the train is careening around a bend. If necessity is the mother of invention, this train should be called “Necessity.”

There are dozens of these little vehicles scattered along the tracks. While it is unlikely they were massed produced, they all look similar, so it is believed that they were for the most part constructed in the same area.

Nothing is actually attached to anything else, like with a nut or bolt, but simply piled onto the tracks like an erector set. When I first rode it, I was told by the other passengers to sit perfectly still, for the entire thing is held together by balance and gravity.

This allows for easy assembly and break down. Yet it also leads to the occasional fatality when the entire thing falls apart going 30 miles an hour (48 k/h) in the middle of the jungle.

Since so many of these trains share the same track, when they meet, the one with the smallest load must yield to the larger one. This is done by everyone simply getting off the train, lifting it off the tracks until the larger one passes, then setting it back onto the tracks and proceeding on one’s merry way.

Upon arrival at the final destination, the train is lifted and turned around, ready to return from whence it came. That destination is wherever the passenger decides is the end.

My wife, a friend and I all rode it together just outside of Phnom Pen one hot and humid afternoon. We sat down gingerly, hoping not to upset things before even getting started. In addition to the three of us, there were five local people with assorted pigs, chickens and two motorbikes on board.

All of this was crowded onto a bamboo platform about 4 by 5 feet (1.2 by 1.5 m) in size. We hunkered down in front as the tiny engine strained to push its mighty load.

A minute later we were flying through the jungle, covering our heads with our hands to fend off low branches and palm fronds. I imagine the train might get up to 30 miles per hour on flat stretches, but once it gets going the only way to slow it down is to cut the engine. There are no brakes.

Cattle roam freely in the Cambodian jungle, and we could often see them ahead, crossing the tracks. Fortunately for us, they always cleared the tracks before our arrival. With no brakes, I would not like to encounter one of them at top speed.

Anyone can flag the train down to get on board. They simply have to do so out in the open, where the brakeless train has plenty of room to stop. If they are brave and strong enough, they can assist the train in stopping by grabbing onto something or someone and holding on — I saw it done — but this tends to upset the balance of things.

We whipped over handmade bamboo bridges, over swift-flowing rivers and past chasms that could swallow us whole if our balance should fail at any time. Going around a turn, we could feel the outer edge of the platform begin to rise, and tried to lean into the turns like a motorcycle rider. It is sobering to realize the only thing holding this speeding little train together is one’s own weight.

We rode the train for perhaps 10 miles (16 km), arriving at a tiny little outpost baking in the jungle sun. It was one of countless nameless little villages you find in the jungle.

Dozens of people were milling about waiting their turn to ride back to where we started. There are no regulations regarding weight restrictions, number of luggage pieces or other such ludicrous rules that ruin the fun of travel in the Western world.

On the bamboo train, if it will fit on board, it is welcome. Once we got off, I counted nine people boarding the return run, most of them holding some small critter bound for market. Once I saw a full-grown water buffalo happily onboard, surrounded by five farmers taking him to a field.

The price for a resident to ride the train is whatever one has at hand. A chicken might be good for several rides, and certainly a pig will get you on board for at least a month. We rich Americans were asked to pay US$ 2 each.

That is about a month’s wage for these people, but we paid it happily. Where else could we get such entertainment and support the local economy at the same time?

Before hiring a motorbike to return to Phnom Penh, I asked why the train does not go all the way there. I was told that it is an illegal operation. The government knows the train exists, but chooses to ignore the fact that it does unless forced to face the issue.

Why it is illegal escapes me, and no one could tell me. Perhaps it is because the government does not get its share of the profit, for how could they when the currency is bartered?

Everything in Cambodia has a price. The corrupt lieutenants left over from Pol Pot’s regime still control much of the country, living in baronial splendor like the fat-cat crime lords they are.

Wherever we went we had to pay a fee to use the road or visit the village. Our guide was very up front about all this, saying, “This road costs US$ 1 and that goes to general so and so.”

The Bamboo Train is exempt from this graft, perhaps because it is just not worth the bother. We were told upon leaving never to mention the train to anyone wearing a suit or a badge in town — even in Cambodia they have “Don’t ask, don’t tell.”

To get around, the tuk tuk (motorized rickshaw) cannot be beat. They are everywhere, and cost about US$ 1 to take you anywhere. For the budget traveler, if you wish to explore, I recommend you simply hire a tuk-tuk driver at the airport and tell him how much money you want to spend. You will probably be pleasantly surprised with where you end up.

Most room prices are for the room regardless of how many people use it, and you can get clean and neat for about US$ 20 per night.

There is an airport departure tax at both the Siem Reap and Phnom Penh airports of US$ 25. If you transit through Vietnam you pay no airport fee. Both airports at Phnom Penh and Siem Reap are clean and modern, with full facilities. Security is on a par with U.S. facilities.