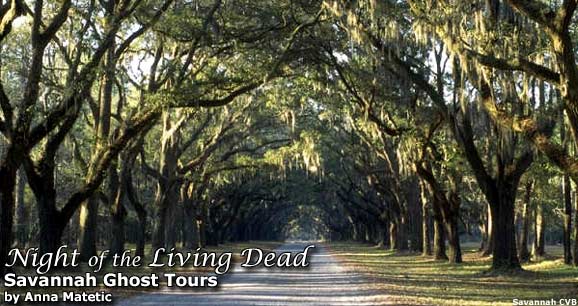 The night air is dry and cool, in stark contrast to the thick, humid air of daylight in Savannah, Georgia. The Spanish Moss, so majestic in the sunlight, now clings forebodingly to the branches of the imposing monuments of trees lining the cobblestone avenues.

The twilight gives the greenish-gray, hair-like strands of moss an eerie resemblance to cobwebs that drape from corners of antiquated mansions as seen in horror movies, similar to the ghostly manors we are passing. The moss obscures some of the light from the moon, casting areas around us in shadow — the perfect setting for a ghost story.

Savannah is often billed as America’s “most haunted city.” Founded in 1733 near the mouth of the Savannah River, it is Georgia’s oldest city. Many of its beautiful 18th and 19th century homes have been beautifully restored. The city’s founder, British general James Oglethorpe, planned the city in a neat series of grids with 24 shaded squares that served as meeting places and centers of business.

Twenty-one of the original squares are still in existence today, and they’re said to be some of the most haunted spots in town. Some of them were used for public hangings. Others were the historic settings of chilling tales of jealousy and murder, betrayal and vengeance. If only the old live oak trees could talk, they surely would have many a hair-raising tale to tell.

Lush sanctuaries from the hot Southern sun during the day, the squares seem especially dark and mysterious at night — a fitting backdrop for the many tours that play upon Savannah’s ghostly populace. Some of the guided walks assemble at the squares, yet I decided there is probably no better way to explore this spooky town than the way many of its restless spirits began their restless journeys — in the back of a hearse.

This October evening, I find myself in the back of a midnight-black 1984 Cadillac that had actually been used by a funeral home and a coroner. According to Nathan, our long-haired guide, for 15 years the hearse carried 3,000 bodies to their final resting places.

The hearse has been renovated for these creepy tours. Eight of us teeter on top of stools that are loosely bolted to the elevated floor in the rear of the hearse. I try not to think of who or what may have rested where I do now. As I balance myself precariously on one of the seats, the hearse starts forward with a jerk, a casualty of the often-rough lanes that make up old Savannah. The rocking motion of the chairs begins to feel normal as we bump along the streets.

We visit places of legends, cemeteries and some of the city’s most-haunted locales, such as the “Olde Pink House” (23 Abercorn Street).

Built around 1771 as a private home, today it’s a restaurant. The two-storey, rosy-hued mansion with white-columned entrance looks innocent enough.

Unsuspecting dinner patrons don’t know that this is a ghost hot-spot until resident ghost James “ladies man” Habersham Junior starts pinching female guests on their behinds. The son of the former owner seems to be obsessed with bathrooms, and is said to lock doors, flush toilets and even pull down ladies’ underwear.

Nathan gives some background on why Savannah’s dead citizens are tormented. He told us that Native Americans are rumored to be buried under Bay Street, one of Savannah’s main thoroughfares. Next, he points out a parking garage that he says was built atop a graveyard where the headstones were removed but the bodies were left behind. Savannah is beginning to sound more gruesome than gracious.

Nathan makes a stop at 12 West Oglethorpe. The house doesn’t look very inviting. The facade is somber and gloomy. The deserted interior can be seen obliquely through grimy windows. A prominent doctor lived here when a ghastly yellow fever epidemic broke out in 1820 that would eradicate a tenth of Savannah’s population.

The doctor’s wife and son begged him to leave the town, but he refused. He felt that, as a doctor, his place was in the city, where he could help. Yellow fever eventually took the lives of his wife and son. Out of his grief, and possibly guilt, the desperate doctor bricked himself up in the house and died.

This spooky edifice is special to Nathan. “This is the only place where, on one of my tours, someone successfully took a picture of a ghost.” Last summer Nathan stopped his tour in front of this house. After the guests looked around and returned to the hearse, one of the female guests reviewed her digital camera and screamed.

In the photo was the outline of a figure. He explains it could not have been a hoax because he saw the picture immediately after it was taken. He even offers to e-mail a copy to anyone who requests it.

I won’t spoil your own supernatural Savannah experience by revealing too much. Let’s just say, between Native Americans and British colonists, remorseful pirates, Revolutionary War heroes and runaway slaves, Savannah truly has an interesting array of restless souls to offer.

Nathan’s grim sense of humor fits in with the creepy tour. Commenting on how much of Savannah was built on top of existing gravesites, he says, “Just think: Standing at 12 West Oglethorpe, you stood on two to three [dead] people.”

When asked about his dubious choice of profession of driving a hearse, telling ghost stories and scaring people, Nathan disagrees that it’s “sick, twisted and morbid.”

With a grin, he responds, “I even know people who pay to sit in the back.”

The 1½-hour tour will take you through cemeteries and Savannah’s historic district. Tickets are US$ 14 for adults and US$ 10 for children 10 and under.

Many other tour companies offer walking or bus tours, some of them ghost tours.