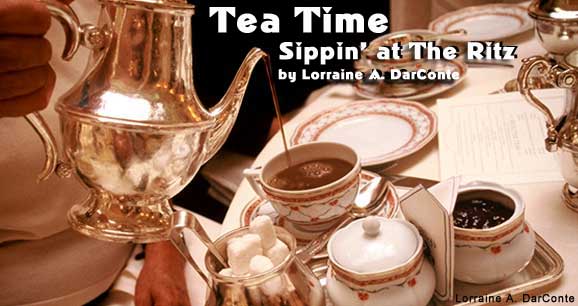 My friends and I have reservations at The Ritz Hotel in London for afternoon tea; it’s a date we’ve anticipated for years. Don’t ask why, it’s just one of those things we’ve always wanted to do. Apparently, we’re not the only ones with such lofty ambitions, as reservations are required at least one month in advance.It seems tea is a very “in” thing to do nowadays; everyone wants to sip Earl Grey from fancy china while nibbling on cucumber sandwiches, scones and miniature Napoleons. Then again, thisisEngland, and tea is in their blood, although it wasn’t always that way.

The French are believed to have been the first to serve afternoon tea. Oh, not the fancy spread dished up today. There wasn’t any clotted cream to spread on light, airy scones or tiny tasty sandwiches with the crusts trimmed off. In the mid-1700s, tea was taken after meals as a digestive, straight up, no cream or sugar added.

Afternoon tea — with all the trimmings — wasn’t introduced in England until almost a century later. Credit for the now long-standing tradition is given to Anna, seventh Duchess of Bedford, who was often famished during the long hours that separated lunch from dinner. To stave off her hunger pangs, she would often have the kitchen send up to her boudoir a pot of tea, along with bread, butter and little cakes.

She started inviting friends to her soirées, and soon everyone was doing it. Tea became all the rage with the well-to-do set, and hostesses were soon judged on their food, china, strainers and even the quality of their napkins.

By the 1840s, dainty sandwiches and cakes, and freshly brewed pots of tea were being served all across London, establishing “afternoon tea” as a British tradition. Teatime, not unlike America’s morning coffee klatch, gave the ladies a chance to gossip and show off their expensive china.

In 1864, the Aerated Bread Company, a London bakery, opened the UK’s first tearoom, and soon they began popping up all over. The shops were not only about refreshments; they provided a place where an unchaperoned lady could hang out with her friends and keep her reputation intact.

Some of the best-known tea rooms in England are The Savoy, Fortnum & Mason’s, The Maids of Honour and, of course, The Ritz, where tea is served in the spectacular Palm Court five times a day. The hotel, conceived by renowned hotelier César Ritz, opened its doors on May 24, 1906 in Piccadilly. Frenchman Charles Mewes and Englishman Arthur Davis are responsible for the Ritz’ unique architectural design. During its early years, guests included King Edward VII and other English aristocracy.

Tea at the Ritz, with its legendary service and stunning ambiance, is still considered the ultimate in luxury, whether you’re royalty or not. However, you will be expected to behave as such.

We are told to arrive 15 minutes prior to our sitting, which is scheduled for 1:30 p.m., and to dress accordingly — in other words, no jeans or runners (sneakers). With so many rules and regulations, it all seems rather formal and rigid. We worry about our clothes and whether or not the staff will be impossibly hoity-toity and treat us like commoners.

We arrive and step inside the spacious main lobby, which is stuffed with bouquets of fragrant pink roses. White-gloved doormen bow slightly as, one by one, they open the brass doors to the inner sanctum like a finely choreographed dance. One doorman flashes a sincere — and yes, slightly crooked — smile, and says, “Good day, Madame. Enjoy your visit.” We are charmed by the courteous attention.

The Palm Court is slightly elevated, a few steps up, like a small stage in a big palace. The room, a fusion of muted yellows and golds, is as grand and sumptuous as you’d expect, and then some. There are gilded mirrors, gold statues, Romanesque fountains, oversized urns packed with exotic flowers and opulent chandeliers hanging in every corner.

Our table is perfectly set for three with fine china and a silver tea service. Several very polite gentlemen pull out our chairs and we carefully take our seats. We feel compelled to sit up straight and speak in hushed tones. The menu place card lists several teas to choose from — Ritz Royal English, Lapsang Souchong Imperial, Jasmine with Flowers, Darjeeling First Flush, and of course, Earl Grey. For non-tea drinkers, coffee and champagne are available; we order the Earl Grey.

Our waiter is French, impeccably groomed, and dressed in a black morning coat with red vest; he is at his ready to serve us. After a few moments, he brings our tea, which we pour through a strainer that fits loosely over the cup.

A three-tiered serving platter is set before us and our waiter describes its contents: The lower layer is filled with tea sandwiches — smoked salmon; egg mayonnaise with cress; ham; chicken and mayonnaise; and cucumber with cream cheese. A stack of freshly baked raisin and apple scones, which are to be slathered with Devonshire clotted cream and organic strawberry preserves, sit snugly on the middle plate. The top plate is laden with a mouth-watering assortment of pastries and cakes, including fruits-of-the-forest compote with English cream. We eagerly work our way up from the bottom.

Every table is occupied and the room is abuzz with the low murmur of people politely chatting while Burt Bacharach songs trickle forth from the nearby baby grand. No one is talking louder than anyone else, and no one is yelling into a cell phone. The atmosphere is gracious, friendly, warm and oh-so-civilized. But it’s also fun and lively, as waiters are asked time and again to take a photo — and they happily oblige.

Then suddenly, and quite unexpectedly, the pianist breaks into a not-quite-rousing rendition of Happy Birthday as a procession of servers encircle several tables, their trays blanketed with white cupcakes, candles ablaze. Apparently, a number of people just got a tad older. Everyone claps then resumes their conversations.

As we enjoy the delicacies, I turn over the back of the menu place card. An apropos inscription reads:

For I’ve passed back in time

Surrounded by glamour and glitz.

As I sip my Earl GreyAll life’s cares pass away

For I’m having Tea at the Ritz.

For nearly two hours we sip tea and eat cake until we are sure we cannot take another bite. That’s when our waiter arrives with yet one more tray of goodies and politely asks, “Madame, More cakes?”