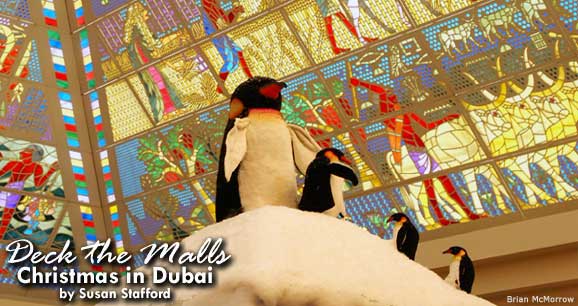 Two huge seated pharaohs stared at me, unblinking and unseeing, frozen in time. I wasn’t anywhere that you would normally associate with these divine beings — Egypt, the British Museum or even Las Vegas.It was December, the beginning of the Christmas season, and I was in Dubai City, outside the entrance to the ultra-modern Wafi City Mall. After a quick glance at the mall directory, I thought, “The pharaohs could have found everything they needed for the afterlife and more right here.”

I’d just hopped off an open-air, double-decker tour bus. I was parched and ready for the cool embrace of the air-conditioned mall. I hadn’t expected to be greeted by the pharaohs or to find the London-style tour bus offering city and beach tours. After several hours exploring the city, however, I understood the guide’s oft-repeated refrain: “Dubai is a country full of surprises.”

Dubai, a member of the federation of seven United Arab Emirates (UAE), pulsates with a cosmopolitan mix of Arab, Indian, Asian and Western lifestyles and cultures. With 1.2 million inhabitants, it is the most populous emirate. Most people live in Dubai City, the country’s capital, on the Persian Gulf.

In contrast to fellow UAE members, Dubai generates only a small part of its gross domestic product from oil reserves, which are considerably smaller than those of its neighbors. Fueled by a visionary leadership, the sheikdom has capitalized on its history as a trade hub to build itself into a cosmopolitan center of finance, manufacturing and tourism.

From the exotic dhows laden with everything including the kitchen sink that still ply Dubai Creek to the glistening glass and steel of modern skyscrapers to the carefully irrigated roadside beds of petunias and marigolds plunked down in the desert sand, my quick tour of the capital underscored the guide’s sentiment that nothing is predictable in this country of contrasts.

I still wasn’t prepared for what I saw as I entered the Wafi City Mall. A 50-foot-tall (15 m) Christmas tree towered over the lobby. Christmas carols floated through the air. Traditional red and green holiday decorations festooned the store entryways.

With my mouth agape and my eyes still fixed on the tree, I tried to respond to the mall greeter’s efforts to give me a map of the stores and a discount coupon for purchases.

“Do you always have a Christmas tree here?” I managed to sputter. “Oh, yes, Wafi City is famous for its Christmas displays. If you go upstairs, you’ll even find Santa’s Village.”

Sure enough, one level up, under the pyramid-shaped atrium that sparkled with rich jewel-colored murals of life in ancient Egypt, Santa ho-ho-ho-ed his Christmas greetings to giggling Muslim and Christian children alike in a gesture of universal goodwill.

Elves, polar bears and penguins stood in attendance around a gingerbread house and igloo that completed the Christmas scene.

While Santa entertained the kids and the pharaohs kept silent watch outside, shoppers of all nationalities were doing an excellent job of supplying themselves with luxury goods from high-end stores. Women shrouded in long black abayacloaks worn over regular clothes and head scarves shopped side by side with young Arab women in low-slung Britney Spears–style jeans and the occasional exposed belly button.

Stylish businessmen and casually dressed Westerners in shorts and running shoes strolled past men clad in traditional long white robes and checkered black-and-white head cloths. Smartly dressed Asian women huddled together checking their maps to locate their next shopping destination. It was United Nations–central right here at the mall.

Suddenly, the sound of mall chatter fell off as the afternoon call to prayer blared over the loudspeaker. Muslim men and women swiftly made their way to their separate prayer rooms, conveniently located next to restrooms, complete with foot showers for ritual foot cleansing prior to prayers.

From the shopper-oriented commercial aspects of Christmas, the mall gave itself over quickly and easily to the tradition of Islam, which forms the bedrock of Dubai and is the official religion of all the emirates. While the majority of Dubai’s residents are Sunni muslims, Dubai is the only emirate that accommodates foreign minorities, with a Hindu temple and a Sikh temple.

As I strolled out of the mall, I felt something brush my hair. Looking up, I was caught in a swirl of fake snow falling from above. I laughed. Children giggled. Always expect the unexpected in Dubai.

For those with only a few days to explore, the Big Bus tour offers an excellent visual introduction to this city of contrasts, with the convenience of hop-on, hop-off, at many major attractions on the City Tour. There’s also a two-hour Beach Tour. An enthusiastic English-speaking guide provides commentaries on each bus.

It is also an easy way for women traveling on their own to see the sights. The buses originate at or near Wafi City, but can be boarded at any of its stops. Reservations can be made online at or by going to the ticket counter outside the Mall.

How to Travel the Globe on a Round the World Ticket
Next Post: Exploring the Culinary Delights of Harlem in New York City